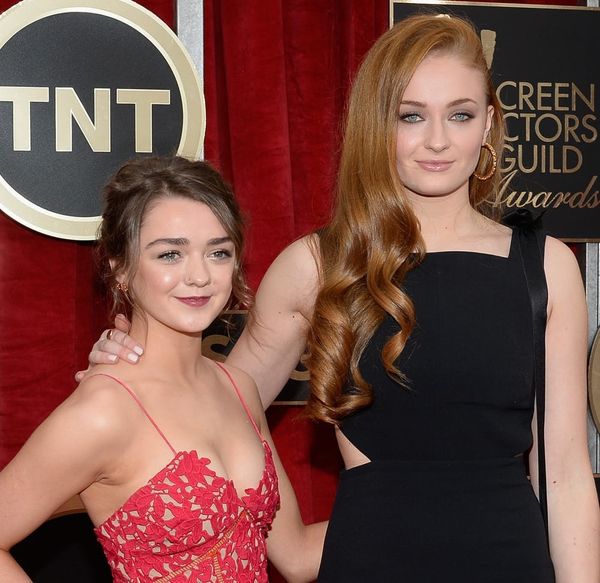 Over the weekend, Sophie Turner and Joe Jonas announced on Instagram that they’d gotten engaged. The couple posted and tagged matching close-up photos of their hands together, and Turner’s beautiful double-banded teardrop diamond ring was front and center as she revealed she’d said yes. Her Game of Thrones costars, including bestie Maisie Williams, were quick to pop into the comments section with their well wishes.

“Queen. I love you so much xo,” Williams wrote alongside pink heart and queen emojis, to which Turner responded, “I love you too my queen.”

Williams also shared the couple’s photo of Turner’s ring, with a message reading: “Congratulations to my beautiful girlfriend on her engagement 💍 This is just one of MANY life milestones we’ll share. Love you both 💗

As previously reported, Jonas’ younger brother Nick was among the first to publicly congratulate the pair, tweeting out an excited, “Ahh! Congratulations to my brother… and sister-in-law to be on your engagement. I love you both so much,” shortly after the news broke. Kevin tweeted his congratulations as well, sweetly welcoming Turner to the family.

Congrats @joejonas and @Sophiee_Turner so happy to welcome you into the family! https://t.co/cqetsCxBdy

Joe Jonas’ old flame, Demi Lovato, also made sure to wish him well in his Instagram comments, writing, “Huge congrats!!!!!” Sooooo happy for the both of you!!!!” And Selena Gomez sent a simple and sweet “Congratulations,” complete with a confetti emoji. Too cute.

Turner joins her fellow GoT stars Kit Harington and Rose Leslie in soon-to-be-wedded bliss, which, according to Harington, is going to involve ALL of the cast. “The whole [show] has got to shut down,” he said in a previous interview. While it seems like we can expect at least some of Turner’s GoT costars at her wedding, there’s been no word on whether she plans to go quite as big with her plans just yet.

Would you love to see a big GoT cast-filled wedding? Let us know @BritandCo!