Know Your Champagnes from Your Cavas With This Sparkling Wine Guide 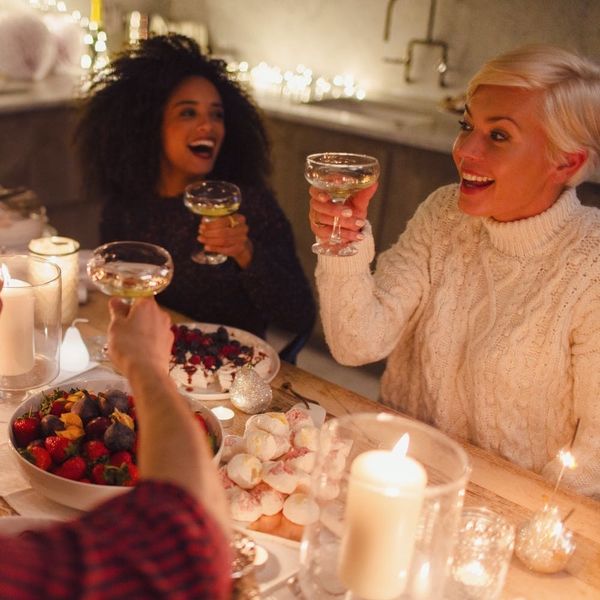 It’s officially holiday party-hosting season, which means you’ve got your Christmas decoration ideas on lock, you’ve found the perfect ugly holiday statement sweater and logged serious hours in the kitchen with some insanely easy Christmas cookie recipes. The only thing left to do before the bash is buy a few bottles of bubbly — but where to start? If you’re like us, you could use some pointers to tell the difference between prosecco and cava (we can’t even begin to explain crémant!). Luckily, RM Champagne Salon beverage director Jay Schuster gave us the skinny, so we can stay sparkling-wine woke all season long. Cheers!

1. Region: The Champagne region of France (also known as the sparkling wine’s appellation). It’s about 80 miles northeast of Paris — just outside the city of Reims. In many countries, it’s illegal to call something Champagne unless it’s produced in this region under specific rules.

2. Grapes: Chardonnay, Pinot Noir and Pinot Meunier. A “blanc de blanc” is 100-percent Chardonnay, while a rosé Champagne is a blend of red and white grapes (makes sense!).

3. Production Method: The Champagne production method involves two fermentation steps, the second of which occurs inside the bottle. Champagne must be aged for at least 15 months, while a vintage Champagne requires 36 months of aging time. Additionally, the “grapes must be hand harvested,” Jay explains.

4. Taste Profile: Champagne has the most robust and complete taste profile of any sparkling wine type, which is why it’s so superior, Jay says. “There’s usually fruit-forward flavors up front, crisp and clean through the middle with a supple finish.” A brut Champagne has “under 12 grams of sugar,” Jay says, which gives it its dry quality.

5. Perfect Time to Pop a Bottle: A midnight toast, engagement celebration or, in Jay’s case recently, passing your driving test (he’s a lifelong city dweller!). Jay says Champagne is definitely a “special occasion wine,” even though, he admits, it’s delicious enough to want to drink every day.

1. Region: Unlike Champagne, crémant can be made with grapes from different parts of France. The Loire Valley and Alsace are two popular regions for crémant, though there are seven appellations throughout the country that are legally allowed to produce the sparkling wine.

3. Production Method: Crémant is still beholden to the classic Champagne production method, so “the quality is almost the same,” Jay explains, though it’s technically called the “traditional method” since only Champagne can be made in, well, Champagne.

4. Taste Profile: Creamier and less sparkly than Champagne. Each appellation has its own distinct characteristics, Jay says, so “if you like your wine jammier, you can try a crémant from southern France.”

5. Perfect Time to Pop a Bottle: “Cremant is a great complement to raw oysters,” Jay says. He also enjoys drinking it with a full meal “because it’s complex enough” to stand up to food. While it’s been around just as long as the rest of the sparkling heavy hitters, Jay says it’s currently enjoying a serious revival among the stylish set. So, if you’re hosting a particularly posh bash, crémant is an awesome choice.

1. Region: It’s most often produced in the Penedès region near Barcelona, or on the Ebro River Valley near Rioja.

2. Grapes: Macabeo, Parellada and Xarello, which are all native to Spain.

3. Production Method: “Cava is almost always produced with the Champagne [or traditional] method,” Jay explains, so you’re “getting a great value,” since cava is significantly cheaper than Champagne.

4. Taste Profile: Light, crisp and refreshing — often with green apple and pear flavors up front — and “on the drier side.” Of the three non-Champagne sparkling wine varieties we’ve talked about, cava most closely resembles Champagne in its taste and dryness, which makes it a stunning alternative to its higher-priced French friend.

5. Perfect Time to Pop a Bottle: Jay calls cava a “patio pounder,” meaning it’s a great option when you know you’ll be sipping some bubbly all night long.

2. Grapes: Prosecco is made from a single grape: Glera.

3. Production Method: It’s called the “Charmat method,” Jay says, with the biggest difference between it and the traditional method being that the second fermentation happens in a stainless steel tank rather than inside the bottle.

4. Taste Profile: Because of its time spent in stainless steel, prosecco has a less complex flavor than its three sparkling siblings, Jay explains. “It’s not as supple and not as yeast-y.” Instead, it’s “light and sweet,” and often has apple, lemon rind, tropical fruit and floral flavors.

5. Perfect Time to Pop a Bottle: Since prosecco tends toward the sweeter side, Jay recommends subbing a bottle for dessert when you’re just too full for tiramisu but still want a treat. He also prefers using it for “blending” — so go for prosecco when you’re making mimosas or topping off cocktails.

When you’re entertaining, it really doesn’t matter which kind of sparkling you serve, Jay says, as long as “everyone has a glass of bubbly in their hand.” He says — and so do we — that it “just makes everyone feel more festive” and is an easy way to add majorly merry ambiance to any holiday gathering.

What’s your favorite kind of sparkling wine? Tweet us @BritandCo and let us know!

Megan Parry
Megan Parry is a lifestyle writer living in Philadelphia where she's making generous use of her library card, obsessively reading friends' natal charts, and learning how to differentiate between "dried apricot" and "juicy apricot" notes in wine.
Home News
More From Home News