This Chicken and Chickpea Soup Will Become Your Winter Staple 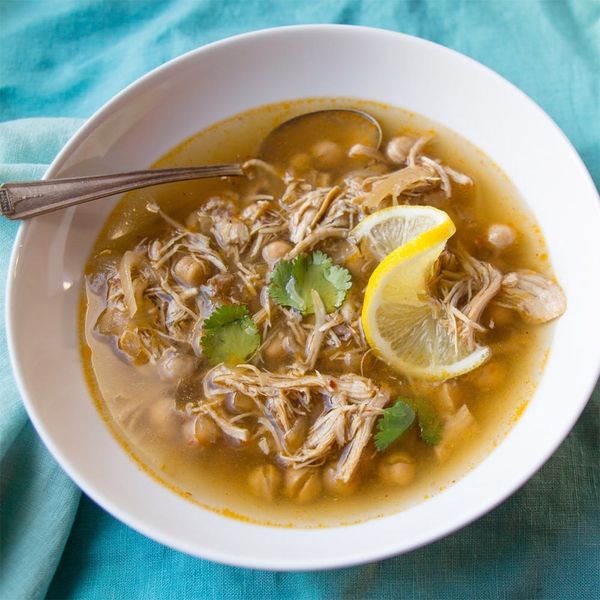 When you think of comfort foods, chicken soup tops most lists, but we’d add hummus bejeweled with pomegranate seeds, fried chicken flecked with za’atar, and glistening diamonds of baklava now that we’ve read The Scent of Pomegranates and Rose Water ($30) by Habeeb Salloum and his daughters Leila Salloum Elias and Muna Salloum. They have ambitiously taken on reviving the food traditions of Syria in their new cookbook. You might not think of Syrian food as fodder for simple weeknight meals, but many of the recipes include a regular cast of characters that you already have in your pantry, like lentils and chickpeas, as used in this hearty chicken and chickpea soup you’ll want to whip up on cold winter nights.

The cookbook title itself actually circles back to Habeeb’s wife Fareeda, whose memory is forever tied to the aroma and flavors of pomegranates, nuts, and rose water, a dessert she would make on special occasions. And that same sense of poetry appears in fanciful recipe titles like “The Old Man’s Teeth” (tiny balls of fried dough tossed with nuts in hot honey), a dessert recipe passed down over generations from a Damascene friend. “The Father of Happiness” stew is exactly what we want to eat on a chilly day — we can almost taste the pumpkin, lamb, and chickpea stew that’s garnished with pomegranate molasses.

But for starters, whip up the chickpea and chicken soup. At first, the recipe seems too simple. (And, if truth be told, to shave off 30 minutes from the initial cooking time, we adapted step one by using our Instant Pot on the soup setting.) A key note as you’re shopping: Use bone-in, skin-on chicken breasts. Both the skin and the bones add flavor and body to the stock, and they help the breast meat remain juicy. Also, you could halve this recipe as it makes 10 portions, but we think a soup swap with friends sounds lovely.

Recipe Notes: This is totally our add, but we liked a bit of fresh cilantro on top of the soup. You could also try parsley.

1. In a saucepan 3/4 full of water, add quartered onions, cinnamon sticks, broth powder, salt, pepper, allspice, cinnamon, and Aleppo pepper, and bring everything to a boil for 2 minutes. Add chicken and, if necessary, more water to cover, and bring to a boil. Skim foam and stir. Reduce heat to medium, partially cover, and cook for 1 hour, or until chicken can be pulled apart easily with a fork.

2. Remove chicken and place in a bowl. Strain saucepan contents into another large deep saucepan. There should be about 12 cups of broth (if not, add a little water). Cover and keep warm on low heat.

3. Separate chicken from the bones and shred the meat — this should make about 6 cups—then add it to the broth. Cover and cook on medium-low heat for 10 minutes, stirring occasionally.

4. While soup is cooking, in a large frying pan on medium heat, melt butter with oil. Add julienned onions and cook for 20 to 25 minutes, or until translucent and soft.

Cozy up to more comfort foods on Pinterest @BritandCo.

Annelies Zijderveld
Annelies Zijderveld is the author of Steeped: Recipes Infused with Tea. Her food writing and photos have been featured in Paste Magazine, The Kitchn, TODAY, Darling Magazine, AllRecipes, and other publications, She whisks together food and poetry on her blog, The Food Poet, and on Instagram at @anneliesz.
Cookbookmarked
Food News
Cookbookmarked Soup Recipes
The Conversation