These Two Friends Use Tattoos to Help End Sexual Violence 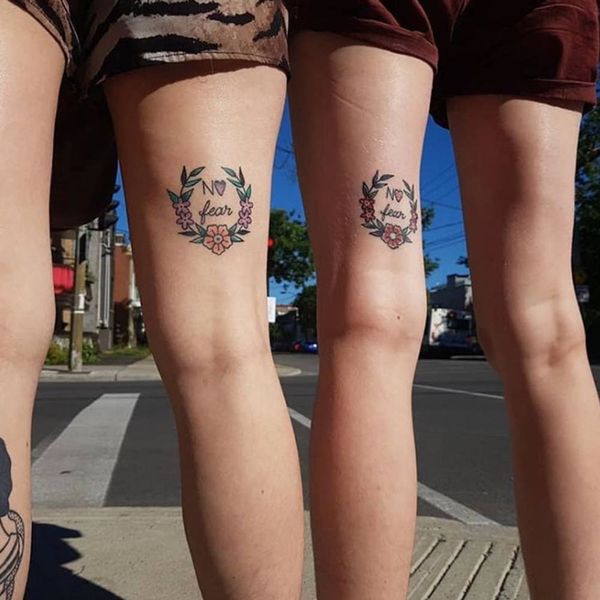 Back in October of 2015, tattoo artist Ashley Love was feeling “desperate to make a statement” about the industry she was living and working in. A year earlier she’d been sexually assaulted by a co-worker who she’d considered a friend. The assault was traumatic, but so was the way her community reacted to it. To her, people seemed more concerned with excusing the behavior of the man who assaulted her for the sake of his comfort than with creating an environment that felt safe for her. She decided to take action.

“Hosting a fundraising tattoo flash event seemed like the perfect way to gather the tattooers who cared, and raise money to help support the battle against sexual violence at the same time… [it] also proved to be extremely healing and empowering,” says Love. Her event, Still Not Asking For It, has been running in tattoo shops across the US ever since.

This June, more than 50 tattoo shops around the world held SNAFI flash events with 100 percent of the proceeds going towards organizations that campaign for sexual violence awareness, prevention, and recovery. Over the past three years, Still Not Asking For It has raised over $357,000.

Love joined forces with her friend, tattoo shop employee-turned-restaurateur Jessica Fisher, and between their respective home bases (Ashley is in Salt Lake City and Jessica is based in San Diego), they organize and run SNAFI flash events, including June’s worldwide event.

“I’ve always worked the front desk [at tattoo parlors], so I have the unique opportunity of meeting every single person who gets tattooed,” Jessica explains. “My concern was that the vibe in the shop wouldn’t be the same if we weren’t there, but in the weeks following the 2018 event we’ve heard nothing but the most amazing feedback and so many of the artists and volunteers have reached out in support and complete willingness to do it again next year. My heart is so full.”

We talked to Ashley and Jessica about their project and about the power a tattoo can have — one that goes way beyond just looking cool.

We wanted to ask you about the name of your project, Still Not Asking For It — why “Still”? Did that stem from a specific frustration about the prevalence of sexual assault in the 21st century?

Jessica Fisher: This term is for everyone… The word “still” is because whether or not something happened yesterday, five minutes ago, [or] 10 years ago, they were Still Not Asking For It.

A lot of people who have tattoos say that getting them gave them a sense of taking back control over their own bodies after something traumatic happened to them (like an illness, an assault, a surgery). What do you think about that idea? Have any of your clients ever expressed those feelings to you?

AL: Yes, totally! I’ve been tattooing for 15 years, and this has always been a recurring theme, whether it’s conscious or not. A tattoo is a permanent mark you choose to receive, and that strongly represents a claim over your own body. I’ve observed tattoos empowering many women after their battle with breast cancer, people celebrating the end of a bad breakup, all types of stuff. I think tattoos do a lot more for us than just look pretty. I’ve heard from many participants [at SNAFI events] that coming and getting tattooed was a great step forward for them and a happy reminder that they are the owner of their body.

A tattoo made at one of our NYC events made it onto @refinery29 today!! Wish they had mentioned the cause 😑 but still pretty rad. Edit: the post was taken down? But we still think it’s cool that they loved the design as much as we do!

A lot of the flash for the events has the phrase “Still Not Asking For It” or something with a similarly powerful message about consent. What do you think it means for people to have a phrase like that on their bodies in such a permanent way?

AL: Personally, I think that there is a lot of victim-blaming in the world, which I can tell you first hand, is a terrible thing to deal with. Survivors of sexual violence are faced with a lot of shame, minimizing, and even denial of their own personal truth. Sometimes it can feel as though people can rewrite your own history, if they just oppose you enough. Having a powerful phrase such as “Still Not Asking For It” tattooed on your body can be a reminder that you are not alone, and the battle you’re fighting is real. It’s a reminder that no one can take that from you.

JF: I have one of our first designs tattooed on me — a woman in a martini glass with the words “Still Not Asking For It” around her. I have plenty of tattoos, and none of them mean as much to me as this one. The conversation that’s sparked when people get a glance at my SNAFI piece is always rewarding. Because of this artwork I’m able to share with them just how important it is to show up for other people, to listen, [and] to work together.

B+C: Getting a tattoo often requires putting yourself and your body in a vulnerable position. Is there a particular issue with sexual assault in the tattoo community that you’re concerned about? Is it being talked about enough?

AL: Yes and yes. I think the issue of vulnerability is very complex. When a person gets tattooed they must be submissive, to an extent, to the person giving them the tattoo. Depending on what area a client is getting their tattoo, they must also expose specific areas of their body, which adds another level of vulnerability [and] tattooers can be seen as rock stars — that gives them even more dominance. When a person uses their position to influence or coerce others to partake in sexual activity, it’s abuse.

Over the past year, I’ve seen the topic get discussed more often… definitely a step in the right direction. However, the issue isn’t resolved. The conversation is getting bigger, and we’re making space for people. I think the tattoo world is becoming more aware.

And another ☺️ #stillnotaskingforit2018 was such an amazing day! #longlivetraditionaltattooing

Have you had an opportunity to see how your project has helped some of the organizations you support?

AL: I’ve become close with the Rape Recovery Center, here in Salt Lake City, so I do get to stay in the loop with them, which is really nice. As of this point in 2018, RRC has served 102 percent more survivors since this time last year. Since the #MeToo movement, they’ve seen an increase in survivors who reach out for support. Having this knowledge of their high demand keeps me very dedicated to this work.

JF: We get a lot of emails and messages that thank us for the help that has come out of this event, specifically this year from many of the small organizations that were helped locally. The really cool part about this year was giving the shops a chance to pick where their donation was going to go, and seeing so many shops research their communities and choose a space that does work within their neighborhoods. It was rewarding watching a lot of the shops show up in person to drop their donations off and meet the people who are fighting to end rape culture every day.

Do you have a tattoo that’s special and meaningful to you? Tell us about it on Twitter.

Corrina Allen
Corrina Allen is a film + television + travel writer from Toronto. Her journalistic goals include a backstage interview with David Byrne, the fictional character she identifies most closely with is John Wick, and her favorite dead person is Vladimir Nabokov. She never, ever Instagrams photos of her food (just her dog).
Activism
Empowerment
Activism Feminism Ladies First Tattoos
More From Empowerment