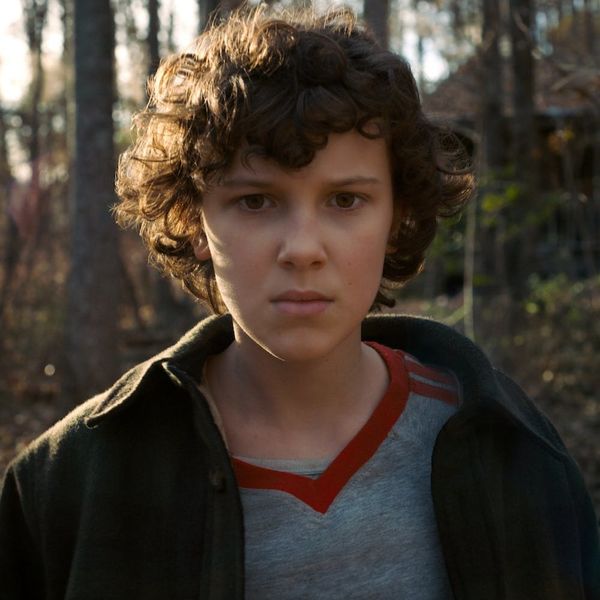 Set in the fictional town of Hawkins, Indiana, this is a supernatural world, complete with a monster-inhabited alternate dimension known as the Upside Down.

We see it too, as a source of highly unusual names, not only for its characters, but, interestingly, also for the actors who play them. Set in the early 1980s, many of the characters have era-appropriate monikers — Winona Ryder’s mom character is Joyce, and there are also Carol, Mike, Jim, Jonathan, Steve, Becky, Karen, Nancy, Billy, and Holly — names that could come straight out of a 1980s (or earlier) sitcom.

But here are some cool baby names of the mostly young cast that you wouldn’t find there.

1. Anniston: Little Anniston Price shares the role of toddler Holly Wheeler with her sister Tinsley, just as the Olsen twins did decades ago. Anniston was a surprise entrant into the Top 1000 in 2014, perhaps as a result of all those Jennifer Aniston magazine covers, nostalgia for Friends, or its similarity to Addison. Actors Chyler Leigh and Nathan West introduced the double-n spelling for their daughter Anniston in 2009.

2. Cade: Cade Jones plays the recurring character of James, a school bully. Cade entered the list of most popular baby names in the late ’80s, peaking at #201 in 2001; it’s now at 408, accompanied by cousins Caden and Cale. There was a Cade in Gone With the Wind and there’s even a Star Wars Cade Skywalker.

3. Dacre: Dacre Montgomery plays the charismatic but unpredictable character Billy. His rarely heard name, pronounced DAY-ker, originated as a surname first recorded in the 13th century and survives in the descendants of Dracula author Bram Stoker.

4. Eleven: She’s a mysterious young girl with psychokinetic abilities and a limited vocab, who was born Jane Ives before she was experimented on in Hawkins Lab. Not many, but a few parents are playing the numbers game for their kids’ names; Erykah Badu has a son named Seven, and on TV we’ve seen Six on Blossom and Seven on Married with Children and Seinfeld.

5. Finn: Young actor and breakout star Finn Wolfhard plays the intelligent and studious Mike Wheeler. Baby name Finn is a gigantic hit, now at #175, helped by a starring role on Glee, and by starbabies parented by Owen Wilson, Autumn Reeser, Tori Spelling, Ed Burns and Christy Turlington, and several others.

6. Gaten: Curly-haired 15-year-old Gaten Matarazzo plays Dustin Henderson; they share the medical condition of cleidocranial dysplasia, which is incorporated into the story line and has raised awareness of it. Not sure about Gaten — could it have derived from the Italian Gaetano?

7. Glenellen: Glennellen Anderson plays the character of Nicole. I think her unusual smoosh name really works, with its combo of male and female elements. Though it does sound a little like a brand of booze.

9. Max: Played by Sadie Sink, Max is one of the key kids in the show. Max has lately been joining the category of boy nicknames for girls along with Sam, Charlie, and Frankie.

10. Millie Bobby: Young British actress Millie Bobby Brown earned an Outstanding Supporting Actress Emmy nomination for her starring role as Eleven when she was only 13. Her double-nickname name feels more currently UK than US: Millie alone is #10 in Scotland, #26 in England and Wales, and #436 on the Social Security list.

11. Roman: Roman is a female character played by Linnea Berthelsen. Roman is currently a Top 100 name for boys; could it now join Rowan — and Rory, Remy, and Romy — as user-friendly for either gender?

12. Sadie: 15-year-old Sadie Sink (great combo!) plays the complicated tomboy character of Max. Sadie has really come back with a bang, now a Top 60 name. Adam Sandler and Christina Applegate are just two of several celebs who chose Sadie for their daughters

13. Salem: Salem Murphy has the minor role of the high school principal, but I just couldn’t resist including this one. A particularly haunting unisex place name with some dark associations via the witchcraft trials and the eponymous supernatural TV series, it still has some offbeat appeal.

15. Winona: Winona Ryder, with her long, stellar resume, plays the mom figure, Joyce Byers. Born Winona Horowitz, she was named after the city in Minnesota near which she was born. Winona is a Sioux Indian name meaning “firstborn daughter” and has been heard on television in Justified, Seinfeld, and Star Trek (as Captain Kirk’s mother). There are many spelling variations.