Super Effective Ways to Stop Comparing Yourself to Other Women 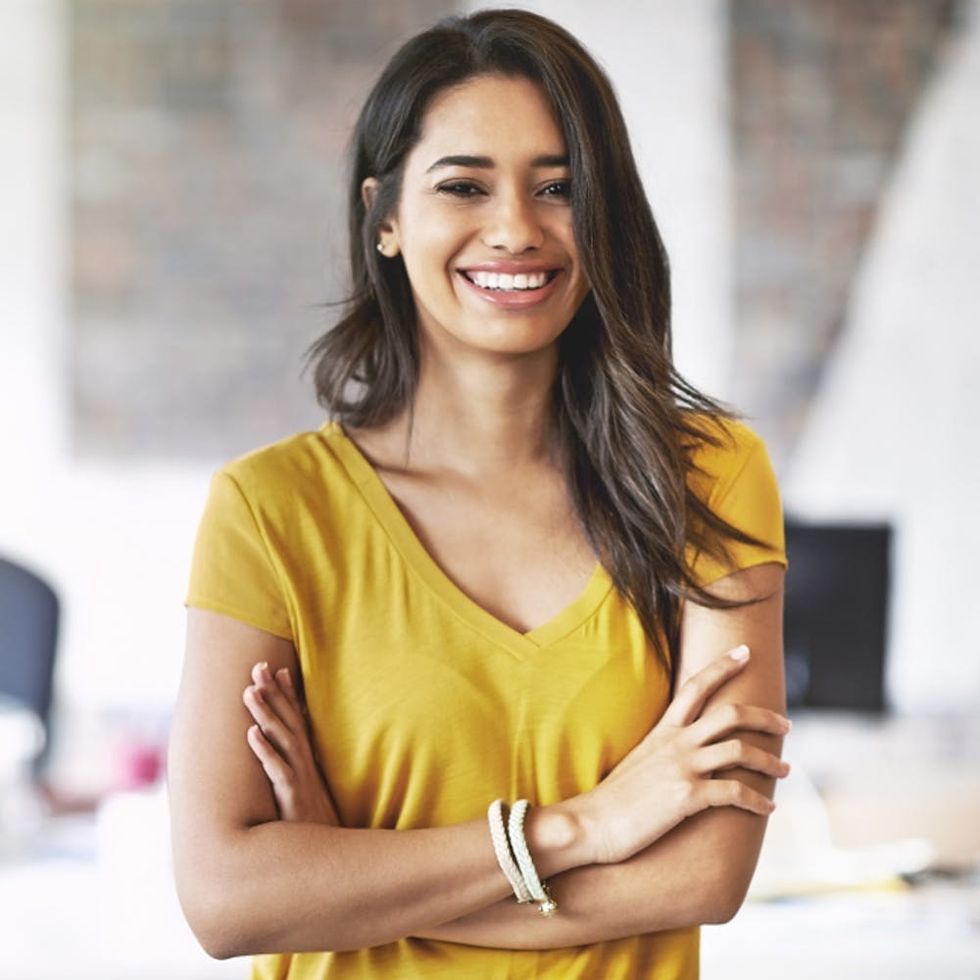 Let’s get real for a hot minute: Even the most confident woman has doubts about herself from time to time. Whether you’re in awe of your fave writer’s ability to turn her home decor blog into a booming biz or a friend’s job as a fashion editor, or you just can’t stop staring at your coworker’s perfectly put-together monochromatic outfit or runway-worthy hairstyle, comparing yourself to others from time to time is a totally normal thing to do. The problem? Doing it in a way that stacks you up against them can make you feel pretty crappy about yourself. To better understand how to kick the habit, we talked with some successful women to find out how they stop comparisons in their tracks. Read on for the deets.

Dr. Lauren Hazzouri — the licensed psychologist behind Hey Lauren — gets right to it, citing the secret to stopping comparisons as self-esteem, which she defines as “the recognition that WE are our value.” She elaborates, “We are our unique contribution to the world. It’s hard to become all that we are when we’re focused on what we are not. Being a first-rate version of ourselves takes more courage than being a second-rate version of someone else. To me, the problem lies in focusing too much on getting good at doing, rather than getting good at BEING.”

Hazzouri also reminds us that confidence and self-esteem aren’t actually the same thing: “Confidence is a feeling of self-assurance that arises from the appreciation of one’s abilities or qualities, while self-esteem is confidence in one’s own value.” Truly believing that no one has more value, she says, will help you embrace your own.

Feeling grounded can be a game-changer when it comes to sticking with work goals, developing healthy relationships, and taking care of yourself. “Even though it is easy to get discouraged when surveying the landscape of other women’s lives, I have a recipe for peace,” says Appleseed Communications founder Ashley Crouch. “I stay grounded with my morning routine of prayer, affirmation, and journaling, which reminds me of MY worth and my mission. I focus only on what I can control in my sphere of influence and approaching the day from a place of abundance, and I express gratitude for every step of my journey.”

To spread the grounding goodness even further, Crouch actually created a celebration tribe of fellow women to cheer on and support each other’s wins and an e-course that helps women overcome negative self-talk. You go, girl!

Set and Stick to Small Goals for Focus

“You never know what it took for someone else to achieve their goals: It could be hard work, a helping hand, or simply luck,” Studio 15 Founder and CEO Jia Wertz reminds us. “By comparing yourself to them, you’re hindering yourself and not giving yourself credit for all the hard work you put in every day, which can be debilitating.”

Wertz says that the secret to success is hidden in your daily routine. “Commit to doing 5-10 tasks daily that work toward your goal, and you’ll be well on your way to achieving it,” she advises. “For example, if you want to get funding for your business, email five investors every day for a month, etc. And remember, success comes at different times and in different ways for everyone.”

Write Down and Celebrate *Your* Wins

“When you surround yourself with talented women, it’s hard to not compare,” Reflektive’s Dani Fankhauser admits. ”However, direct comparisons don’t take into account the seasons of life, ups and downs, and the vastly different paths each of us has taken.” She went on to tell us, “One way I’ve come to see a more accurate picture of my own accomplishments is by writing down three ‘wins’ at the end of the day. I force myself to think of at least three, whether one of them is ‘major product release’ or ‘sent pitch to potential partner.’ This helps balance what I’ve done (and may not be able to publicly brag about) and what I’m seeing in my Facebook feed.” So smart!

Amity Kapadia, the founder of RocketBaby, agrees that celebrating wins is the way to go when it comes to stopping yourself from making comparisons. “As the founder of an early-stage company, it can be tempting to dip into the comparison pool, but daily positive affirmations combined with celebrating victories and hard work is so much more rewarding! Take time to appreciate the small wins,” she wisely tells us. “They add up faster than you think.”

Stay True to Your Personal Journey

“All women face challenges in their lives that can hinder confidence and productivity — and to be honest, I’ve compared myself to others who appear to be very successful,” confides Helya Mohammadian, the founder of Slick Chicks. “But I try to remember that we can’t use other people to measure success or failure. Plus, all that time and energy spent worrying about what someone else is doing will only hold you back from building your business or career! I try to focus on my own personal goals and what I am doing to achieve them. I believe we all have a purpose and a mission in this life, whether it’s big or small. That’s what keeps me going.”

Glamoutfit CEO Hanh Nguyen chimes in with similar sentiments. “Remind yourself that everyone’s journey is different. Also, everyone has their own struggle! Most of the time, when comparing yourself to others, you only see the shiny part of their life and not their struggle.”

Don’t Lose Sight of the Source

Marissa Hastings, the founder of Your Breast Self, believes that comparing ourselves to others is “just a relic of our evolutionary past” and thinks we should each look at it more objectively.

Demonstrating how to talk yourself through it, she says, “Okay, the pressure I’m putting on myself to have a body (or career, or whatever) like hers isn’t a legitimate thing. It’s just my silly brain not knowing any better. Noted. I can learn from this and work on teaching myself to approach this differently next time.” Hastings advises that taking a step back can help you personally identify with comparisons, making it easier to put a stop to them.

Casey Erin Clark is a professional actor in New York City, which means her job is literally to compete with thousands of other actresses who share similar physical qualities like height, build, and hair color — all for a small handful of jobs! “I’ve always struggled with comparing myself to others,” she confesses. “The work of my acting career has been to own what is unique about me (my voice and my spirit) to just tell the story in the room, instead of trying to figure out what they want me to be, fit myself in a box, and then beat myself up if I don’t book the job.”

While learning to embrace the cool things that set her apart, Clark uncovered a passion for helping other women uncover their own voices. Now she also does voice and speech coaching through Vital Voice Training, which she co-founded. As if that weren’t badass enough, she also has some empowering advice: “We always tell our clients that when they start comparing themselves to others (or to the impossible standards that society has for women in general) to go back to their core values and what makes them unique to tell their stories with bravery! No one else has YOUR story.”

Own Your Story and Expertise

Echoing Clark’s thoughts on the importance of celebrating your uniqueness, business and career coach Harper Spero tells us that she overcame comparisons by owning everything that makes her special. “When I first launched my business, I spent hours on other coaches’ websites comparing myself to them. It was so bad that I couldn’t launch my website because I was making so many tweaks to the site based on what I saw other people doing.”

How was Spero finally able to move forward? “I quickly realized how much it didn’t serve me to do that. Yes, there are coaches who have similar services and styles to mine, but I needed to represent ME. I encourage women to celebrate their special qualities and story instead of spending time just focusing on how other people may perceive them.” Right on!

Have you had trouble with comparing yourself to others? What helped you get over it? Tweet us your stories and tips for success @BritandCo!

From Your Site Articles
Krista Gray
Krista Gray is a web producer and freelance writer who lives in San Francisco. When she's not working with clients through her company GoldSquare, she loves reading, traveling, and learning new things.
#CreateGood
Relationships
#CreateGoodAdultingSelfwork

35 Healthy Recipes You Can Make in 30 Minutes or Less

These Cookbooks Have All The Summer-To-Fall Recipes You Need

17 New TV Shows and Movies To Watch This Fall