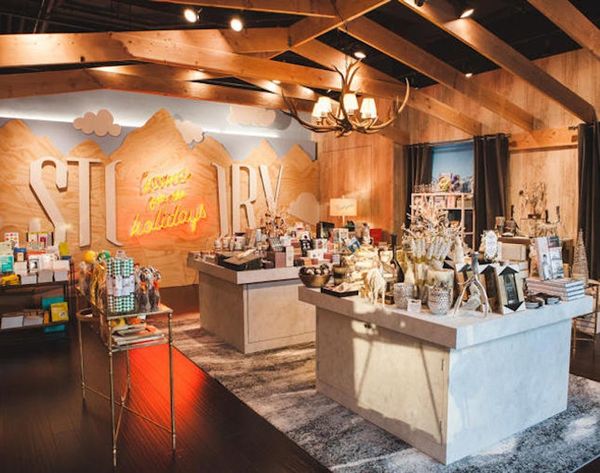 Our friends at Story have partnered with our friends at Target and we like what we see. If you’re unfamiliar with Story, it is an NYC retail concept that changes its space and merchandise every four to six weeks, completely reinventing itself with a new theme, new design and new floor plan. Like a permanent-but-always-changing pop-up shop. (Story’s Founder Rachel Schectman actually joined us at Re:Make in August to tell her story as an entrepreneur, which was a big treat.) And if you’re unfamiliar with Target, who are you?

Story just opened the doors to their annual seasonal bonanza shop, “Home for the Holidays,” where they curate some of the best gifts from around the world. It’s like a luxurious mountain retreat, equally rustic and stylish. This year, they’ve partnered with Target to include favorites from their collections, namely from the more exclusive brands like Nate Berkus and Archer Farms. Not only that, but many of Target’s items are hashtagged so you can tweet and ‘gram all the shopping fun. #OMT (Oh my, Target.)

The partnership came about when Shectman found herself unknowingly chatting with Target CEO Brian Cornell, who stopped by Story unannounced this fall. Once she realized who he was, she seized the opportunity.

Ask (Santa) for what you want, and you shall receive. The Target team was on board and over the next two months, Story and Target worked like crazy to get the store up and running. Shectman hand-picked about 30% of the items from Target, including a wool throw blanket, Nate Berkus dessert plate set and a cute coat with a faux fur collar.

Todd Waterbury, Target’s chief creative officer, is looking to learn a lot from this Story collab in the way they stage their stores and how they reinvent the customer experience, “We think of it as a miniature, one-inch by one-inch store window. What would make you stop and go inside?” Well, for starters… everything.

PS! Brit + Co is in there too, can you see us?! That’s right, our Brit Kits (starting with this one!) will be in Story this year. Guess we’re in pretty good company, no?

Target’s sponsorship at Story runs through January 4, 2015, so if you find yourself in the area, do check it out and tweet us what goodies you pick up #OMT @britandco!

Annie D'Souza
Annie is the founding father and editor-in-chief of The Midwestival and a long-time jean-on-jean enthusiast.
Gifts
Party
Gifts target
More From Party