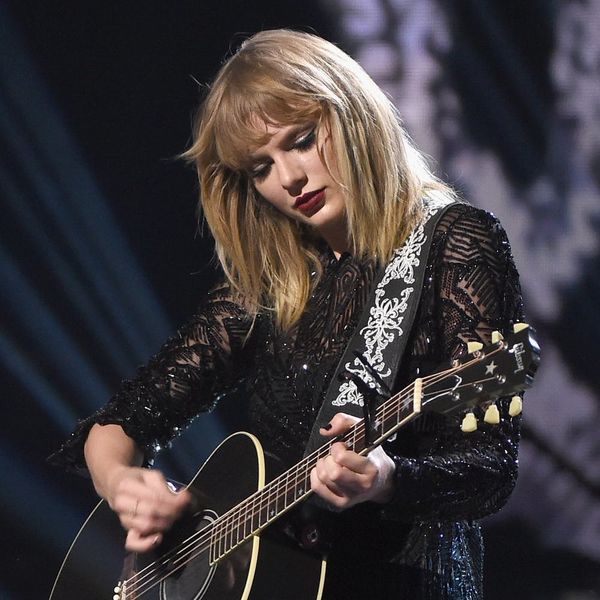 We knew it was coming, and at midnight, as promised, Taylor Swift released her new song “Gorgeous,” the third single from her upcoming album Reputation.

The song is the most uplifting of the new songs we’ve heard so far. In it, she talks about just how infatuated she is with SOME mysterious, gorgeous person.

“You’re so gorgeous/I can’t say anything to your face,” she sings in the chorus. She also references this infuriatingly good-looking person’s “ocean blue eyes looking in mine/I feel like I might sink and drown and die.”

Not unlike with her last single “Ready For It,” fans immediately freaked out on Twitter. Many said (or speculated?) that “Gorgeous” is all about Swift’s reported current BF, actor Joe Alwyn. But is that because she told them to at her recent album listening sessions?! That’s one of the rumors going around:

Taylor told fans at the secret sessions that #Gorgeous is about her boyfriend Joe pic.twitter.com/4mxHSz9neL

The first two lines of the song are, “You should take it as a compliment/That I got drunk and made fun of the way you talk,” which many took to mean Alwyn’s British accent. But hold up: Swift’s ex Tom Hiddleston is also British. HMM. (Also, way rude, Tay.)

There are also lyrics that say, “I got a boyfriend, he’s older than us/He’s in the club doing I don’t know what/You’re so cool it makes me hate you so much.” Swift first met Hiddleston at the 2016 Met Gala when she was still dating DJ Calvin Harris, so that part sorta checks out, although Harris is not older than Hiddleston. Nonetheless, fans are CURIOUS:

Is "Gorgeous" actually about Taylor cheating with Tom Hiddleston?

There’s one other part of the song that fans are living for, and it has nothing to do with romantic relationships and everything to do with the REAL loves of Swift’s life: Her cats, Dr. Meredith Grey and Detective Olivia Benson.

“There’s nothing I hate more than what I can’t have,” Swift sings. “Guess I’ll just stumble on home to my cats/Alone, unless you wanna come along, ugh.”

“Guess I’ll just stumble on home to my cats, alone.” TAYLOR IS THIS A LOVE SONG TO MEREDITH AND OLIVIA?!? #Gorgeous pic.twitter.com/PgmngXOCcg

Of course, lyrics are usually not about JUST the one very obvious thing they seem to be, and Swift is the master of hidden meanings. Take from it what you want: We’re taking it as a love song to the cats.

What do you think of Taylor’s new single? Let us know @BritandCo!