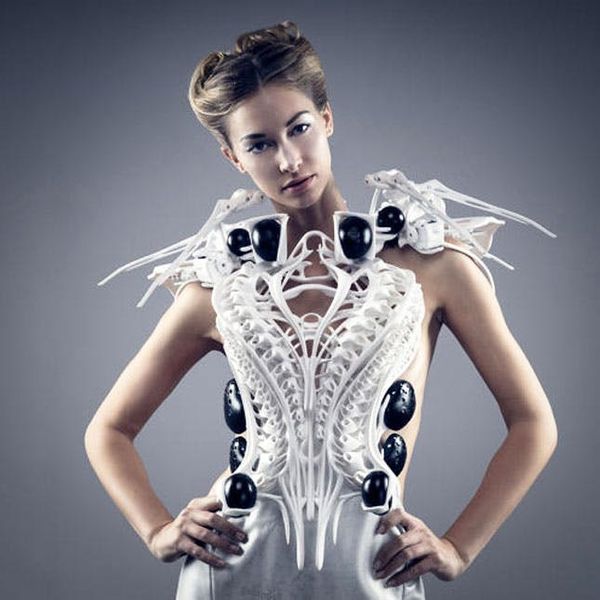 By now, you should be pretty familiar with the fact that at Brit + Co, we believe that everyone is creative. Everything we do stays true to that mission, and we’re particularly focused on inspiring and enabling women and girls to tap into their inner maker. The world of innovation and invention that surrounds technology is no exception to that goal, and just like Intel’s Sandra Lopez, we believe diversity fuels innovation in the tech world and everywhere.

That’s why we’ve teamed up with Intel to compile a list of the most inspiring women in tech — brilliant thinkers, makers and doers. From engineers to electronic artists to the CTO of the USA (yes, that’s a job title), here are 15 women in tech you need to follow STAT to fuel that innovation inside us all.

@anoukwipprecht): First up, designer/artist/technologist Anouk Wipprecht. This Netherlands-based innovator is making a name for herself in the world of fashionable technology with designs that move, breathe and react to the environment around them. Her cutting-edge tech couture pieces incorporate everything from circuitry, plastic tubes, foils and so much more, providing plenty of eye candy for tech + fashion lovers alike. Check out Intel IQ to see her fashion-forward pieces in motion. Trust us, you’re totally gonna want to rock the Spider Dress yourself. (Photo via Robert Lunak/WIRED)

@jessegenet + @lumi): This maker fused her passion for fashion, photography, technology, design and textile printing to create a simpler and cheaper way to produce high-quality prints. Jesse’s company Lumi lets creative people everywhere customize literally anything (ex. a stamp or silk screen) without spending their entire paycheck with its innovative water-based dye that develops color through sunlight. That’s one way to turn your bright idea + passions into a game changer, Jesse. (Photo via Brit + Co + Lumi)

@romatheengineer): Roma picked up a strong interest in engineering because she felt the field was the perfect pairing of her love for science and design. These days she’s an associate structural engineer at WSP helping design bridges, skyscrapers and more with architects. One of the most recognizable of those structures just so happens to be the tallest building in Western Europe, The Shard. Outside of her professional career, Roma promotes engineering and other science-based professions to young people and underrepresented groups throughout the world. (Photo via @romatheengineer + Bethany Clarke/Getty)

@debbieblox): Not only is Debbie’s storytelling-construction-set company “disrupting the pink aisle” for little girls — it’s mission is so much more than that. Inspiring young girls to become future engineers and innovators, this female CEO is redefining playtime everywhere. (Photo via Michael Loccisano/Getty + GoldieBlox)

@leebrina): As Instagram’s first female engineer, this lady is challenging the gender gap in a big way by making a huge impact on a small yet powerful team. Brina first fell in love with the field after getting into web coding and realizing it was instant gratification after an upload and refresh of a page. She has been implementing her ideas ever since at Instagram and has become a young, but strong voice for females in the tech space. (Photo via Maykel Loomans/Elle + Instagram)

@triketora): A big proponent for women in the tech field, who has written about the lack of diversity, Tracy is a strong advocate in the startup community. In addition to voicing her opinions, these days she’s working on product, platform and infrastructure projects at Pinterest. Before her current tenure at the DIY social network, she turned down a role at Facebook to join Quora when there were only a handful of other team members — that’s a fearless lady. Not only does she have no fear, but she sees no ceiling on the potential for herself and every lady out there. (Photo via Brad Barket/Getty + Pinterest)

@hmason): This native New Yorker makes beautiful things courtesy of data through her machine intelligence research company, Fast Forward Labs. As if that wasn’t impressive enough, she’s got a whole slate of other things going on as well. Hilary also advises companies big and small in regards to their data strategy for Accel, co-founded HackNY — a non-profit promoting engineering students in the startup community — and runs a photo-based blog based on her NY life. Yep, she’s busy, and we’re impressed. (Photo via Fast Forward Labs)

@ayahbdeir): An engineer, interactive artist and a leader of the open source hardware movement, Ayah is the definition of girlboss. Her company is making inventing with electronics more accessible to anyone in the world, but her impressive resume doesn’t stop there. When not staying busy with littleBits she runs an experimental art, architecture and tech lab in Beirut called Karaj. You are indeed looking at an international boss lady. (Photo via Slaven Vlasic/Getty)

@adafruit): Limor, an electrical engineer, founded the electronics hobbyist company that designs and resells open source electronic kits for every hobby hacker out there. Due to her groundbreaking and individualized work, she was the first female engineer on the cover of Wired, has been named Entrepreneur of the Year by Entrepreneur and is considered one of the most influential people in the open-source hardware community. (Photo via Noam Galai/Getty)

@smithmegan): Serving as an assistant to the President in her role as Chief Technology Officer, Megan combines insight on tech policy, data and innovation to determine how those fields can advance the future of the US. A former VP at Google, she is also an an award-winning entrepreneur, engineer and tech evangelist, and that’s just the top layer of her impressive portfolio. (Photo via Joi Ito/Flickr)

@reshmasaujani): Author of Women Who Don’t Wait in Line, former Deputy Public Advocate of New York City and the first South Asian woman to run for Congress, Reshma is currently helping to inspire, educate and equip girls with computing skills to achieve greatness through her organization Girls Who Code. With her girl-power organization, she is encouraging young girls to achieve more, with the goal of providing 1 million young women with science education by 2020. #1millionstrong (Photo via Cindy Ord/Getty + Girls Who Code)

@ginab): This entrepreneur and investor is currently running the specialized social networking site Mightybell. She previously was involved in startup Ning and is an angel investor for Levo League. Most impressive though is her work with Lean In — as co-founder she is helping to develop a community that offers women support in reaching their ambitions alongside other female powerhouses like Sheryl Sandberg. (Photo via Laura Cavanaugh/Getty)

Caterina Fake, Founder of Findery and co-founder of Flickr

@caterina): Having helped to develop Flickr into what it is today as one of the co-founders, Caterina also started Hunch and the recently launched Findery, a space to share the places you love while exploring the world. Add in her positions on the boards of Creative Commons and Etsy, and we think it’s safe to consider this gal a juggernaut in the tech world. (Photo via Richard Morgenstein/Flickr)

@lara_hogan): In addition to her position at Etsy, the author of Designing for Performance stays busy, as she also runs a blog in her spare time to provide insights into her work + professional life, with a side of donut indulging. You can never have enough donuts ;) (Photo via Robin Marchant/Getty + Etsy)

(@joannastern): If you’re looking for insight on all things tech from phones, tablets, laptops and more, this is the lady to turn to. Every week her columns and videos are filled with information to help people make smarter tech decisions. Joanna previously worked at ABC News as the tech editor and wrote for both The Verge + Engadget, so we’re gonna trust this lady when she gives her opinion. (Photo via Joanna Stern)
Anjelika Temple
As Co-Founder and Chief Creative Officer of Brit + Co, Anjelika Temple brings her voracious consumption of all things creative and colorful to DIY projects, geeky gadgetry finds and more. When she's not DIY-ing her heart out, you'll find her throwing dinner parties with friends or adventuring with her husband David, their daughters Anokhi and Indira, and their silly dog Turkey.
Girlboss
Tech
Girlboss intel Sponsored
More From Tech