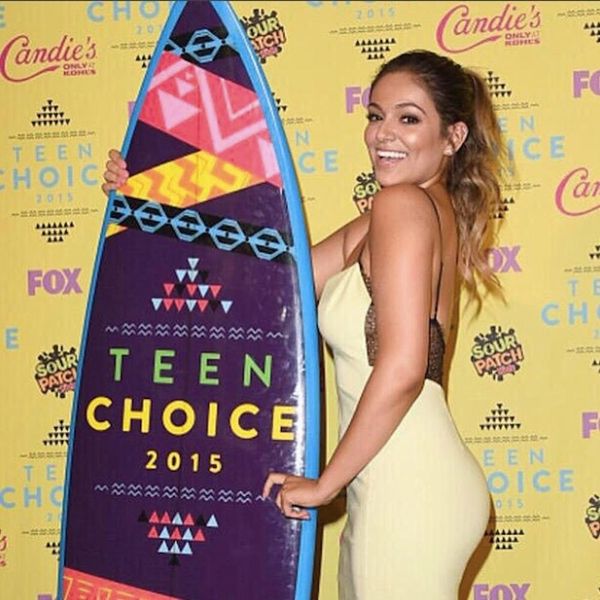 The Teen Choice Awards this year had everything — boy bands, girl bands, surfboards, Uncle Jesse and more — and that’s just what we got to see onscreen. We got to see some of our fave celebs rockin’ gorg red carpet styles, sporting some new makeup/hair trends and even peeped some Instagram posts of them pre-show. Behind the scenes, between the commercials and backstage after the show, celebs took to social media to share moments not visible on TV. From sequined close-ups and group mirror selfies to corporate swag and BFF goofiness galore, we’ve rounded up the best behind-the-scenes Instagram pics of the night.

1. Seating Arrangements: Check out this pre-show look into who went where. That’s a lot of Pretty Little Liars for one photo… foreshadowing their win for Choice TV Show perhaps? (via @teenchoicefox)

3. Fifth Harmony: Fresh from their weekend guest spot on Taylor Swift’s 1989 World Tour stage, the quintet of singers took a quick backstage snap in a dressing room mirror + giving a shoutout to Candie’s for decking them out for the evening. (via @fifthharmony)

4. Willow Shields: Behind the scenes, celebs like Willow of Hunger Games fame got to create their own Sims 4 characters. Hers is pretty spot-on, don’t you think? (via @willowshields)

5. Bethany Mota: After snapping up a Choice Web Star surfboard, YouTuber Bethany Mota posted this pic of herself proudly with her award backstage. (via @bethanynoelm)

6. Sarah Hyland: Because work-related functions are way more fun with friends involved, Sarah Hyland posted this collage of herself goofing off behind-the-scenes, cheesin’ and generally having a good time. (via @therealsarahhyland)

7. Nina Dobrev: Stylist Ilia Urbinati gave us an up-close look at the gorgeous beads and sequins on Nina’s Zuhair Murad dress, with red, black, pink and salmon stripes galore. So pretty. (via @iliaurbinati)

8. Stephen Curry: The Golden State Warriors were awfully proud of their point guard for taking home the Best Male Athlete surfboard. We genuinely can’t wait to see little Riley‘s reaction dance, sure to hit the internet any second now. (via @warriors)

9. Grace Helbig: This YouTube star found a kindred spirit in fellow YouTubers Lilly (better known online as iisuperwomanii) as they sat together in the audience, grinning for Instagram during commercial breaks. (via @gracehelbig)

11. Sour Patch Prom: Sour Patch Kid candies and contest winners were both abundant backstage at the Sour Patch Prom. The best way to work off all that sugar is to dance it out, no question. (via @sourpatchkids)

What was your favorite part of the show? Spill in the comments below!

Amy Lynch
Amy is a freelance writer and editor, telling the stories of progressive people and projects that move the world forward. Her work has appeared on The Hairpin, Refinery29, Citygram and more, and she's developed content for the likes of Alternative Apparel, Milkshake and Silvercar. She lives, works and plays with her fiancé and their dog, Bogey, in the weird, wild heart of Austin, Texas.
Party