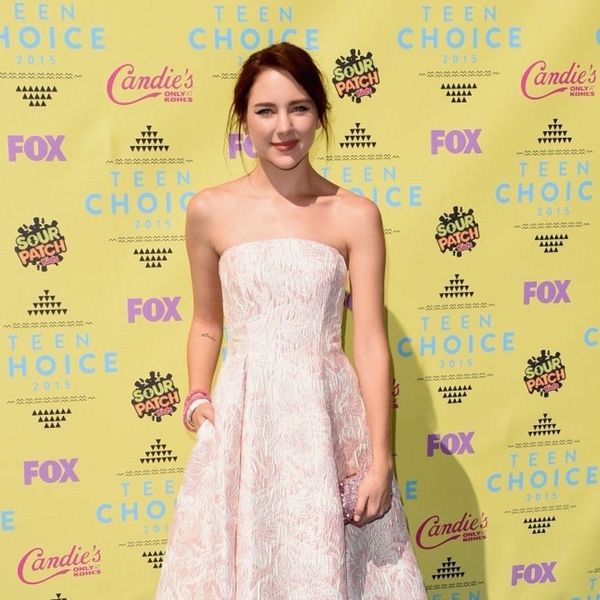 Our teenage years may be a thing of the past (for some of us anyway), but we still love tuning in to watch the Teen Choice Awards each year and this year is no different. It’s a night to celebrate the movies, television shows and music that has made 2015 one for the books. And with Ludacris, Josh Peck and Gina Rodriguez hosting, we know this year’s show is going to be anything but boring. After checking out some of the awesome Instagram posts our fave celebs have posted getting glammed up for the red carpet, we know you’re dying to see what looks that’s got for the night. So, before those giant surfboards are handed out — perhaps by a bronde Blake Lively or one of T-Swifts’ squad? — get comfy on your couch with a big acai bowl and maybe a raw dessert or two, and soak up some of the style inspo on tonight’s red carpet.

1. Jordin Sparks: Sporting a black and white shift dress, a curly bun with soft, ombre curls and that oh-so-trendy septum piercing, Jordin’s is a total bombshell. Plus, those custom black Palter Deliso heels were inspired by the toy brand Monster High, and that adorable skull design adds a pop of fun. (Photo via Jason Merritt/Getty)

5. Robbie Amell + Italia Ricci: The Flash and Chasing Life stars couple up on the red carpet, with Robbie keeping it simple in black slacks and rust-striped button-up. Meanwhile, Italia is looking chic in a retro-inspired minidress + that incredible gold-inlaid art deco clutch. (Photo via Jason Merritt/Getty)

6. Fifth Harmony: Singers Lauren Jauregui, Ally Brooke Hernandez, Dinah Jane Hansen, Normani Kordei and Camila Cabello, better known as the group Fifth Harmony, stun in a variety of styles. But a popular theme here seems to be the Angelina-esque side slit and wide-legged pants. Either way, baby, they’re worth it. (Photo via Jason Merritt/Getty)

7. Haley Ramm: The X-Men star keeps it simple it pretty in pink with a pastel floral jacquard dress, glittery pink heels, and a glittery little clutch. Other than that choice arm party, she’s accessory-free and it looks super clean. (Photo via Jason Merritt/Getty)

8. Natalie Alyn Lind: There’s nothing ’80s about The Goldbergs star’s fire-engine red, lace midi-dress. Plus, the high ponytail is having such a moment right now. (Photo via Jason Merritt/Getty)

9. Jenn McAllister: This Youtube star’s dress mixes lace and solids, and shows some skin in just the right places. The long sleeves give the dress a vintage feel, but it’s balanced by the modern cut. This is definitely a show-stopper of a minidress. (Photo via Jason Merritt/Getty)

10. Katie Stevens: The American Idol runner-up owns this stunning red-sequined mini dress. The nude shoes, long sleeves and that insanely gorg floral pattern keeps it classy. Anyone else feel like she should break out in an ice-skating routine?(Photo via Jason Merritt/Getty)

12. Zendaya: This sophisticated beauty pulls off a this super dimensional crop top with ease. She paired the top with a black side-slit maxi skirt with pleated detail from Ashi Studio. Those giant hoop earrings, glittery black heels and stacks of silver on her fingers really top off her look. Nothing like a little shimmer. (Photo via Jason Merritt/Getty)

13. Rachel Platten: The Fight Song artist is fighting through her foot injury to perform on stage tonight, but it doesn’t look like it’s slowing her down at all. She stuns in her textured, lacy dress with a pearlescent rectangle clutch in hand. (Photo via Jason Merritt/Getty)

14. Mae Whitman: Mae’s ensemble is all sequins, stripes and pretty colors — the perfect combo of some of the trends we’re seeing tonight. Not to mention that eye shadow! #Flawless. (Photo via Jason Merritt/Getty)

15. Lea Michele: The Scream Queens star is also embracing the floral trend with a strapless white dress covered in beautifully embroidered red and blue graphic detail. She paired it with some red stiletto heels and a stunning smile. (Photo via Jason Merritt/Getty)

16. Nina Dobrev: She may not be coming back to her hit show The Vampire Diaries, but Nina’s still up for choice TV Lip Lock with her former costar and ex Ian Somerhalder, and she’s turning heads in a sequin, mesh and cutout bandage dress. Plus, her illusion strappy heels have us doing a double-take! (Photo via Jason Merritt/Getty)

17. Chloe Grace Moretz: Chloe goes bold with red lips, flowy black chiffon skirt and a lace top with a snake making it’s way up to the red apple on her shoulder. Her blue-tinted heels ground the whole ensemble. (Photo via Jason Merritt/Getty)

20. Victoria Justice: This gorgeous teal dress has fringe #onfleek, as Victoria is showing the crowd here. She matches her bodycon dress with some sweet gold accessories. (Photo via Jason Merritt/Getty)

Which outfits did you love? Share with us in the comments below!

Nicole Jahns
Nicole is a writer, artist and major dog enthusiast eating her way through Chicago, IL. When she’s not getting her “om” on, she’s sharing recipes and DIYs on her blog, Midwest Love Fest.
Celebrity Style
Party
Celebrity Style Red Carpet
More From Party