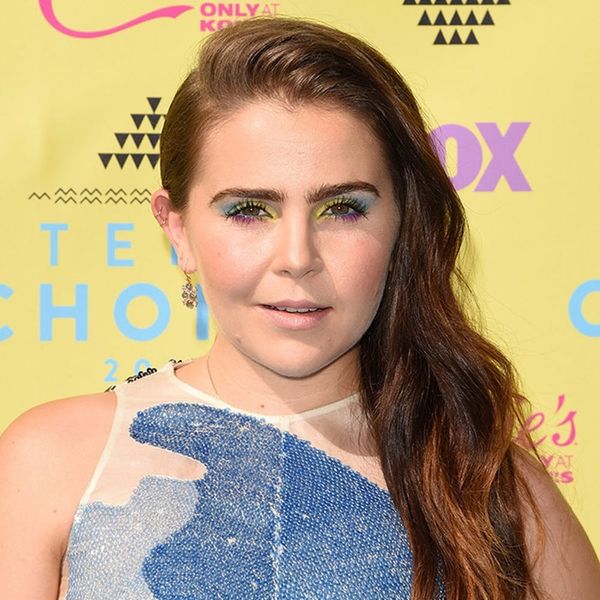 Runways provide endless inspiration when it comes to beauty, but there’s just one catch — the looks don’t always work IRL. But that’s exactly why we love the red carpet. Sure, celebs are dressed to the nines, but the looks are generally something we can rock on the daily. Think: a fun pink lip, a copper smoky eye and or beautiful coiffed locks. The Teen Choice Awards are no exception. This year’s red carpet provided its fair share of hair and makeup inspo. From electric eyeshadow to show-stopping red lips, check out some of our favorite looks below:

1. Mae Whitman: The classic smoky eye was out en force, but actress Mae Whitman took things to the next level with a spectrum of electric hues. Talk about an eye-opener. This is one look we’re dying to try out on a night out. (photo via Jason Merritt/Getty)

2. Zendaya: Actress, singer and “Bad Blood” co-conspirator Zendaya’s badass braid might have turned some heads, but it’s her glowing skin that caught our attention. Girl is glowing! (photo via Jason Merritt/Getty)

3. Jordin Sparks: Ok, two things. One, we love the laid-back vibes of Jordin’s “undo” (hello, natural curls). Two, that red lip is all out sassy! A bright pop of color looks flawless with her black and white striped number. (photo via Jason Merritt/Getty)

4. Haley Ramm: Actress Haley Ramm channeled some serious retro vibes out on the red carpet with a perfectly executed cat eye. The rest of her look is understated and fresh, striking the right balance of elegance and edge. (photo via Jason Merritt/Getty)

6. Victoria Justice: Down ‘dos dominated the Awards this year and while romantic waves were definitely the style of choice, it was the straight, ultra shiny locks as seen on celebs such as Victoria Justice that had us seriously considering our haircare routine. (photo via Jason Merritt/Getty)

7. Yara Shahidi: Updos tended to be soft and romantic, but Yara broke the mold with a gorgeous fishtail braid that was both flirty and fun. (photo via Jason Merritt/Getty)

8. Greer Grammer: Summer is all about bright colors and actress Greer Grammer totally gets it. She forewent the favored nude hues, dolling up her lips with a punchy shade of bright pink, which just so happened to play up her oh-so-’90s choker necklace. (photo via Jason Merritt/Getty)

9. Emma Roberts: The 24-year-old Scream Queens star nailed the whole girl-next-door-glam thing by pairing an embroidered sheath midi dress with soft waves and an au natural makeup look. Add that one to your work week, weekend and night out beauty rotation. (photo via Jason Merritt/Getty)

10. Gina Rodriguez: Hello volume! The actress and host of the 2015 Teen Choice Awards rocked some crazy gorgeous curls that inspired more than a little hair envy. Don’t even get us started on the shine-factor. We’re obsessed! (photo via Jason Merritt/Getty)

11. Rachel Platten: The “Fight Song” singer did short-haired ladies everywhere proud with her fabulously coiffed lob. The waves were loose and romantic, but had plenty of bounce to keep things feeling fun. The summery, natural-looking makeup also wins major points in our book. (photo via Jason Merritt/Getty)

Which of these looks is your fave? Who do you think deserves a nomination for best hair and makeup? Tell us in the comments!

Libby MacCarthy
Libby MacCarthy is an urban planner turned writer with a love (bordering on unhealthy obsession) of all things fashion and beauty related. She lives for perfectly brewed coffee, farmer's markets, dinner parties and perusing impeccably designed boutiques. When she's not on the hunt for the latest trends, you'll likely find her plotting her next adventure or nose deep in a book. Libby currently splits her time between the East Coast and her adopted home of France. Follow her daily adventures on Instagram.
Celebrity Beauty
Hair
Celebrity Beauty Celebrity Style
More From Hair