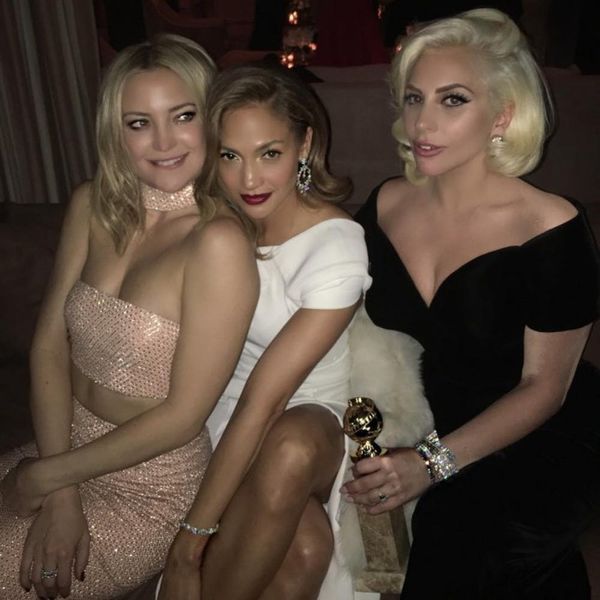 The champagne has been popped, Taraji has handed out even more cookies, presumably, and stars were declared winners: The 2016 Golden Globes are, sadly, already a thing of the past. But that doesn’t mean we can’t relive the fun of the night through some awesome taken by some of your fave celebs themselves, like Ms. America Ferrera. Warning: These pics will give you a bit of squad envy.

It’s a green room dream! Charro and Selma, ahem, America Ferrera and Eva Longoria, gave us a sweet and sour selfie and we loved everything about it. We’re just jealous we weren’t invited. (via @americaferrera)

Last year’s winner for Best Actress in a Comedy Gina Rodriquez was still beaming like a winner, giving some hug action to Chicago PD’s Sophia Bush. (via @hereisgina)

So many Kates! So many sparkles! Presenter Kate Bosworth shined bright like a diamond on the red carpet and beyond. (via @bridgetbragerhair)

Bump-It loving Katy Perry was trying to take a bite out of the delicious Eva Longoria. Maybe she was trying to snack on her bun to make a more powerful bun? Probably not, but either way, great selfie! (via @evalongoria)

Jamie Lee Curtis and fellow nominee, Flesh and Bone’s Sarah Hay, turned commercial time into selfie time, or maybe they were bonding over the struggle to keep their eyeliner game on lock all night. We have to say, well done on both counts, ladies. (via @sarahhayofficial)

Duck faces and cheek kisses at the after parties are signs of a good night. Besties Nikki Reed and Lea Michele may not have been invited to the big party, but they got down anyway. (via @ritamorigi1)

Yas. QUEENS. Two big-time winners of the night and goddesses of high TV drama, Lady Gaga and Taraji P. Henson bonded over their wins and posed with their new golden pals. (via @goldenglobes)

Fingers were crossed all night for a Schumer-Lawrence selfie, and they so sweetly delivered. Posing with Amy’s sister and red carpet date, Kim, Amy showed there’s no hard feelings when your bestie wins the award you were both nominated for (they can probably co-own it, right?). (via @amyschumer)

This ‘gram might redefine the term #GlamSquad (we’re including Gaga’s new globe in that squad, too). Is Kate’s smirk saying, “You can’t sit with us?” because we so want to be invited to that lunch table. (via @jlo)
Kristin Egan
Kristin is a Chicago-based freelance writer who is trying to "adult" as much, or more so, than the next girl. She studied at UW-Milwaukee and also attended "funny school" at comedy institutions like Second City and Improv Olympic. When she's not writing, she spends her time hunting for the perfect iced coffee, listening to too many podcasts and hanging out with her cat, Lou.
Golden Globes
Pop Culture
Golden Globes
More From Pop Culture