Are You Sitting Down? Because Flaming Lips Just Made a Pink Beer 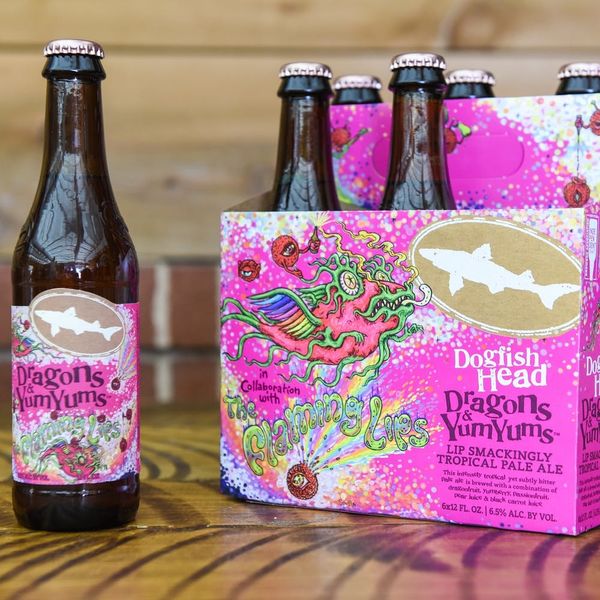 If your dream springtime afternoon involves cracking open a cold beer and enjoying your favorite record on vinyl, we have the best news ever for you. In the pairing of every music lover’s wildest dreams, The Flaming Lips have teamed up with Dogfish Head for a “first-of-its-kind beer and vinyl collaboration,” according to a press release, and they’re releasing two new songs inspired by their brand new beer. Even better? The beer is pink, so it’s already totally Instagram-worthy.

To celebrate Record Store Day on April 21, the rock band will release a limited-edition seven inch called “The Story of Yum Yum and Dragon,” which will pair dreamily with Dogfish Head’s new beer, Dragons & YumYums, a lip-smacking, tart pale ale brewed with “a combination of dragonfruit, yumberry, passionfruit, pear juice, and black carrot juice.” Wayne Coyne, frontman for The Flaming Lips, wrote lyrics for the two new tracks, “The Story of Yum Yum and Dragon” and “Pouring Beer in Your Ear” with the tropical ale in mind, making it the first-ever beer with its own theme song.

According to Sam Calagione, CEO and founder of Dogfish Head Craft Brewery, the collab was inspired by the “epic, sensory enveloping experience at the intersection of creative beer paired with creative music. There [have] been tons of iconic collaborations over the years, but we believe this is the first time a band has been so pivotal and deeply involved in the creation of the beer, the ingredients that were chosen, as well as authoring a song made specifically in tribute of the beer.” Even cooler? The Flaming Lips will also release “100 translucent records filled with the actual Dragons & YumYums beer.” Yes, you read that right — beer-filled vinyl records, in celebration of Record Store Day, will be available at “special events nationwide” around April 21.

Coyne added, “Working with Dogfish Head has been a meeting of two, seemingly, opposite product makers. We as The Flaming Lips (being completely unaware of our branding and marketing potential) and them, Dogfish Head, (being sooo well branded I thought they made dog food, fish sauce, bongs, AND beer)… turns out they, the Dogfish Head, thought we, The Flaming Lips, were a well-branded and -marketed entity… so us coming together to make, what might be, the world’s first vinyl record filled with pink colored beer… is somehow… perfect!!”

The pink-hued pale ale will retail shelves and taps from late March through August, ideal for those lazy spring and summer afternoons spent listening to music with pals. The Flaming Lips are currently on tour throughout the US and Europe through November.

Are you excited to try The Flaming Lips’ new music and pink beer together? Tweet us @BritandCo and let us know!

Arielle Tschinkel
Arielle Tschinkel is a pop culture junkie who went to NYU because the Olsen twins went to NYU (really). She is a freelance writer whose work has also been featured on HelloGiggles, Refinery29, SheKnows, Bustle, Hollywood.com, and many others; and she's living her dream one Britney Spears GIF at a time. Follow her on Twitter @mrstschinkel or visit her website at arielletschinkel.com.
Grocery Shopping
Food News
Grocery Shopping New Food Alert Party Ideas Shopping Spring Break
The Conversation
Reviews:
More From Food News