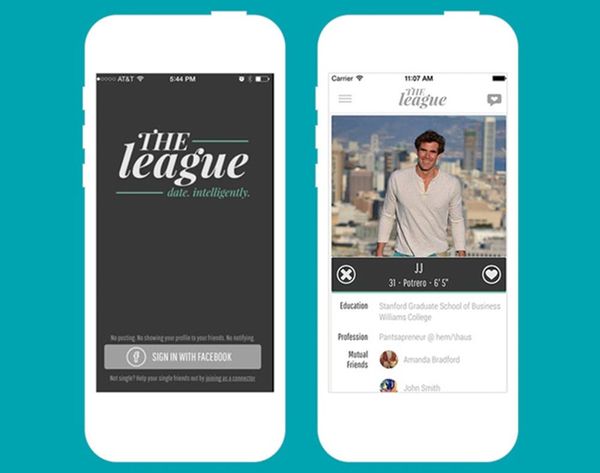 Between Tinder, HowAboutWe, Grouper and Coffee Meets Bagel, it seems like every day there’s a new dating app to try out. But if you barely have time to make dinner (or let’s be real, get it delivered), let alone explore new dating apps or pick through hundreds of mostly mediocre date options, online dating can seem like a giant time suck. This is where The League steps in.

Their tagline says it all: “Date. Intelligently.” Founded by Amanda Bradford, a former Googler who was frustrated with her lack of compatible dating options, this new dating app is for single people who know what they bring to the table. As The League tells its users, “You’re smart, busy and ambitious. You don’t need a dating app to get a date — you’re too popular as it is.”

The League (free on iOS) promises to solve some of the key user experience problems that most people have with online dating. We had a chance to talk to Bradford, and she told us “We keep track of things like flakiness — people who are hearting, but don’t message or respond to messages. The metric we want to aim for is a high match-to-message ratio. That way people don’t need to get a lot of matches to get dates. They fit your preferences and you fit theirs.”

The League’s “flakiness deterrent” results in more time for actual dating, something competitor dating apps like Tinder seem to almost discourage. “We’ve seen an incredibly high reply rate so far — we want to eliminate this false ‘swipe right’ mentality that makes people swipe on a lot of people they aren’t actually interested in. The goal is to have a high-quality interaction, a low signal to noise ratio. We want people to take their ‘hearts’ seriously and to only heart people they are really interested in,” says Amanda. The app includes a flagging system so that if the user is just there to browse and not participate, they get tossed back onto the wait list. Less clutter and more high quality matches — sounds awesome to us!

While the app is only live in San Francisco, Bradford has plans for rapid expansion in the coming months, “Our next move is going to be engaging our wait list to act as city scouts — ambassadors to recruit the critical numbers we need to launch and ensure that there is a high-quality dating pool on the app.” With a rumored waiting list of over 10,000 people, we think it won’t be long until another city joins in on the fun. Download the app today, or if you’re not in San Francisco, sign up for the waiting list so The League can come to your city.

Do you think The League’s “flakiness deterrent” will work? Tell us what you think in the comments below!

Dena Smith
Dena writes about beauty/fitness/fashion/inspiration on her blog Dena Julia. When she's not working out, playing with her hair or taking pictures of her dog, she works to create beautiful solutions to life problems of all sizes, like Standbuy, a platform to help people through the financial burden of cancer.
Apps
Tech
Apps Dating