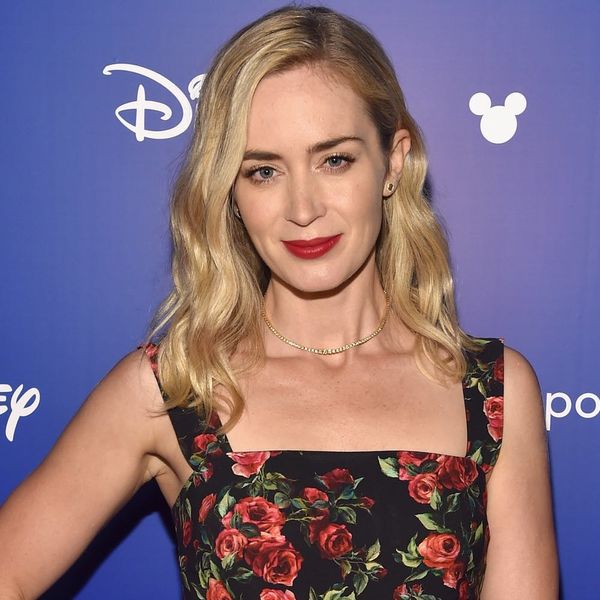 From the moment it was announced that Emily Blunt would be taking on the iconic role of Mary Poppins (a choice the original Mary Poppins, Julie Andrews, approves of!) in Mary Poppins Returns, we’ve been waiting with bated breath to see her in action. Though we got a sneak peek at the actress in full costume thanks to a profile snap Disney released back in March, we haven’t seen much actual movement — until now.

Not only were attendees of Disney’s D23 expo privy to the first official teaser trailer, which reportedly shows the Girl on the Train star flying down to Earth before “pulling an umbrella out of a sink” and being surrounded by flying objects inside a house, those that weren’t able to attend were treated to a new moving poster that shows Blunt in all her full Poppins glory.

Donning her signature blue coat, red leather gloves and a matching red hat, the British-American smiles cheekily at the camera after peeking out from beneath her magical umbrella. Big Ben can be seen in the background, and the whole scene has us giddy with excitement.

Practically perfect in every way. #EmilyBlunt & #RobMarshall from #MaryPoppinsReturns flew in to #D23Expo to say hello 👋☂️ Digital Art Installation by @silasveta

Speaking about the challenges of building on top of such a classic film, the actress told the crowd, “I needed to try to pay homage to Julie Andrews but carve out a new space for myself. And we were very loyal to the books.” Meanwhile, director Rob Marshall, who was also on-hand at the expo, had nothing but praise for the 34-year-old actress, calling her “stunning” and “born to play this part.”

Mary Poppins Returns will hit theaters on Christmas Day 2018 and will also star Meryl Streep as Mary Poppins’ cousin (YAS!), Lin-Manuel Miranda as Jack the lamplighter (a Bert-type character who watches over London’s streets), Angela Lansbury as a balloon lady, and OG cast member Dick Van Dyke as a banker.

Are you excited for Mary Poppins Returns? Tweet us @BritandCo.