The People Behind Cambridge Analytica Have Started a New Company 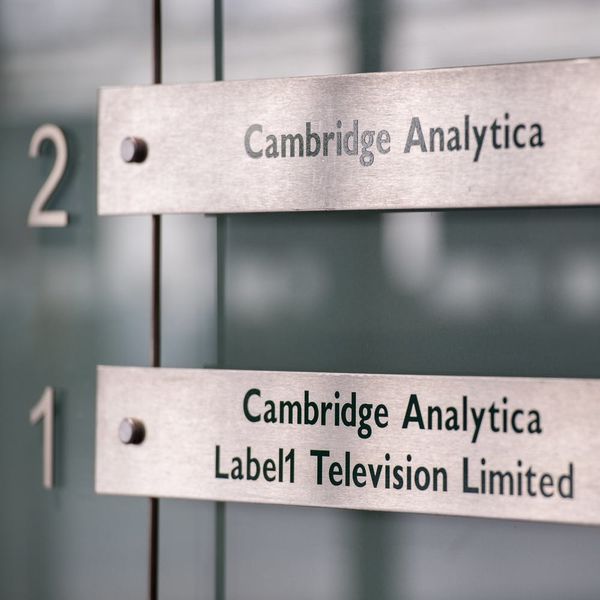 In the wake of a major scandal that led Facebook CEO Mark Zuckerberg to testify before Congress, the British political consulting firm Cambridge Analytica shut down this week, two months after news broke that the company had illegally mined private data from as many as 87 million Facebook users. But, while the company’s leadership has officially shuttered Cambridge Analytica, which consulted for Donald Trump’s 2016 presidential campaign, they have also already started a new company with many of the same players.

According to Business Insider, the new company — which, based on personnel alone, seems like it’s essentially re-brand of Cambridge Analytica — is named Emerdata.

The new company, like the old, has plenty of ties to the Trump administration.

Business Insider further reports that Johnson Chun Shun Ko, an executive from the military Frontier Services Group, which was founded and is chaired by Erik Prince, is also a director at Emerdata. Erik Prince is also the brother of Secretary of Education Betsy DeVos.

Even further, Rebekah and Jennifer Mercer, two children of major Trump campaign donor and ultra-conservative billionaire Robert Mercer, are on Emerdata’s board. Robert Mercer not only gave to Donald Trump’s 2016 campaign, but was also a major funder of the far-right website, Breitbart News.

Rebekah Mercer, who is now serving on the board of Emerdata, also donated to the Trump campaign. Further, Mercer is responsible for bringing Steve Bannon to the Trump campaign, and ultimately to the White House. Bannon, who claims to be an “economic nationalist,” was also the executive chairman of Breitbart News. Bannon served as the CEO of Trump’s presidential campaign from August 2016 onward, and was appointed chief strategist and senior counselor to the president after Trump won.

Erik Prince, who chairs the company that employs one of Emerdata’s directors, also has deep connections to Trump. Apart from being the brother of Education Secretary Betsy DeVos, Prince also allegedly set up a back channel between the Trump campaign and the Kremlin prior to Trump’s inauguration, according to the Washington Post.

The Trump campaign has moved to distance itself from Cambridge Analytica following the Facebook data mining scandal. An anonymous official with the Trump campaign told POLITICO in March that the president’s 2020 campaign did not have any existing contracts with Cambridge Analytica (before it was shuttered and reformed as Emerdata), and did not have plans to work with the company in the future.

So far, it’s not exactly clear what Emerdata does or will do as a company. However, Business Insider reports that paperwork for the new company files it under “data processing, hosting, and related activities.” Given that so many of the major players remain the same, and the new company has at least something to do with data, it seems like Emerdata is just Cambridge Analytica by another name.

Elizabeth King
Elizabeth King is a politics, history, and culture writer based in the Twin Cities. She is generally pretty cranky but still enjoys traveling, music from the early 2000's, and plotting the resistance. Feel free to say hi on Twitter at @ekingc or check out some of her work at www.elizabethcking.com.
Controversy
Current Events
Controversy Facebook
More From Current Events