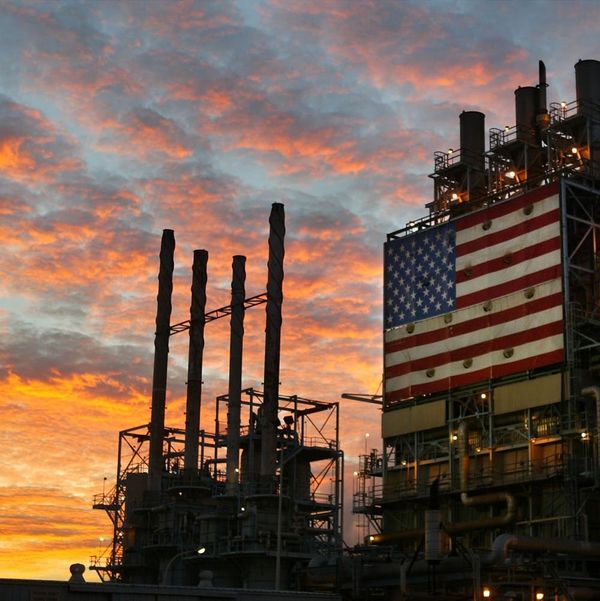 A new defense bill that President Trump is expected to sign before the year’s end calls climate change “a direct threat to the national security of the United States.” It’s quite a shift in tone from the president’s approach to environmental issues leading up to now. If this bill acknowledges that climate change is a threat to national security, yet Trump has spent the first year of his presidency undoing policies that were meant to combat climate change, where exactly does the US stand on this issue?

To recap: The president pulled the United States from the Paris Climate Agreement this fall, and also made moves to repeal the Obama administration’s Clean Power Plan. And as president, Trump has mostly downplayed the dangers of climate change.

Jamie Henn, a co-founder and Strategy and Communications Director for 350.org, an international campaign dedicated to climate change solutions, tells Brit + Co that the US military has long said that climate change is a threat. In other words, open recognition of the dangers of climate change is nothing new for the US government.

“What’s interesting is that Republicans and the Trump Administration are finally being forced to listen,” says Henn. But, while there’s language in this defense bill about climate change, Henn says it’s best “not to hold your breath,” because the current administration is unlikely to translate that language into real action to improve the environment.

Noting the damage Trump has already done from a policy perspective, and that Trump-appointed EPA Administrator Scott Pruitt is not in any way tough on climate change, Henn says that “action is needed, not words.”

Paul Getsos, the National Director of the People’s Climate Movement echoes Henn, and tells us that “Climate change is not a priority for this administration.” Getsos says that under Trump, climate activists “have to think about action at the state and local level since the federal government has abdicated its responsibilities.” Henn also emphasized the need for political change “to come from the bottom up.”

Now that the United States is the only country refusing to sign the Paris Agreement, a group of more than 300 cities, states, universities, and private companies have formed a coalition called America’s Pledge, which is “maintaining U.S. momentum on climate action in the absence of federal leadership,” according to the group’s website. Members of America’s Pledge, which is led by California governor Jerry Brown and former mayor of New York City Michael Bloomberg, have stated they intend to reduce the US’ greenhouse gas emissions.

Though we don’t have much reason so far to expect meaningful action from the federal government on climate change under Trump, there’s still room for cities and states to continue on a better path forward. If America’s Pledge is able to follow through on promises to reduce greenhouse gas emissions and invest in renewable energy, there’s some chance the US can be a part of global climate change policy. But based on what Henn and Getsos have to say, a lot of the responsibility will fall to activists to make sure real change happens.

Elizabeth King
Elizabeth King is a politics, history, and culture writer based in the Twin Cities. She is generally pretty cranky but still enjoys traveling, music from the early 2000's, and plotting the resistance. Feel free to say hi on Twitter at @ekingc or check out some of her work at www.elizabethcking.com.
Environment
Current Events
Environment Politics science
More From Current Events