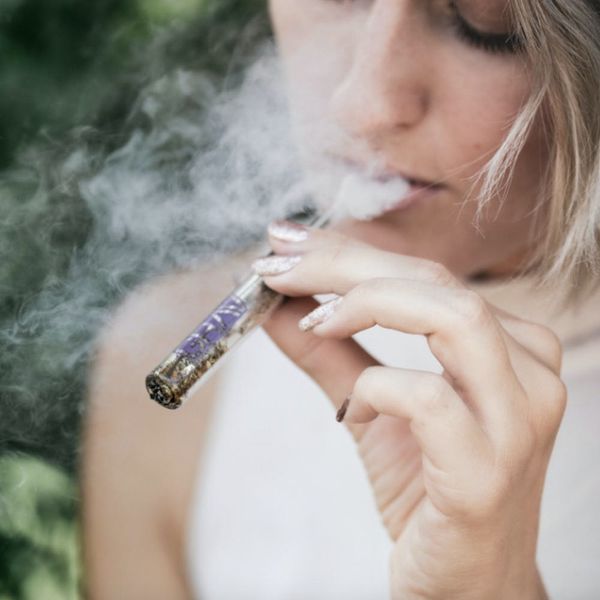 An honest look at the ways women are taking care of their minds and bodies in real life.

Endometriosis is a condition that often goes undiagnosed for years. Patients are sent home with prescription anti-inflammatories like Naproxen and told they’re just having a string of “bad periods.” Their pain, perhaps because it’s tied to something so inherently female, is frequently dismissed. There are a multitude of studies and anecdotal stories that show that women’s pain is taken less seriously than pain experienced by men. This kind of gender bias might seem minor on the surface but it reality, it creeps into all different areas of health care: from the emergency room to your family doctor, from corporate medical research to government healthcare legislation.

Endometriosis is one condition that illustrates how the kind of attention and treatment women are given is failing them in terms of both pain management and a cure. As a result, many women have been turning to medicinal cannabis to alleviate their symptoms, but even in states where it’s been legalized, there are serious barriers that prevent women from accessing this viable option. And then there’s the social stigma — which even doctors aren’t immune to.

We talked to two women who, after spending years pursuing treatment from doctors, gynecologists, surgeons, and other specialists, turned to cannabis to find relief for their endo-related symptoms (including pain, anxiety, nausea, and insomnia) but are still struggling to find a long-term solution. Without one in sight, they’re hoping, at the very least, to lessen the stigma around cannabis use by sharing their stories.

Krista lives in Oklahoma, where the licensed use of medicinal cannabis (MMJ) was legalized this past summer. Without Medicare, the license application fee is $100 and must be renewed every two years. Anna lives in Delaware, has a license to use medical marijuana, but can’t apply for a federal job in her field (ironically, health care) because MMJ use has not been legalized beyond the state level. Both women have battled endometriosis for years and feel that cannabis is the only workable solution to deal with their symptoms. Despite legalization, it remains difficult and stigmatizing to access.

“My endo is awful right now but I can’t bring myself to have a surgery until my baby isn’t breastfeeding anymore – and we get insurance,” says Krista. “Without insurance I’m stuck in pain.” Besides the laparoscopic surgery and hormone injections Krista says she tried as a teen, she’s been given Tramadol (an opioid) and Naproxen (an anti-inflammatory). “I get very irritable when I take them, which isn’t a good alternative to pain.Cannabis is a new option in my state but my doctor isn’t allowed to issue recommendations because the clinic he works for won’t allow it. So I have to pay for a different visit elsewhere.”

Anna, who found no relief in the string of birth control pills, anti-inflammatories, and hormones her doctors prescribed for her, says that three different gynecologists gave her the dismissive diagnosis of “painful periods.” “In my mid-20s, my friend told me his mom had always had extra Percocet. I could get it for free or very little money. Soon, I became dependent on opiates without a doctor’s supervision and had to withdraw.” She had become worried about developing a serious addiction.

Both women found that cannabis brought them the most relief with the fewest side effects. “Wax or shatter is most effective for me, specifically a high CBD content with a decent THC amount,” says Krista, referring to two kinds of concentrate that fall under the umbrella of butane hash oil. “This medicine consistently reduces my pain from a 10+ to a more manageable four or five. Some days [it provides] even more relief.”

The effects that endometriosis has on a woman’s life aren’t limited to the five to seven days a month when she’s menstruating — they can last for her entire cycle and be utterly debilitating. “Last year, when I was 31, I had emergency surgery for a cyst so painful that it was unable to be controlled with opiates,” says Anna. “I got a colonoscopy, where they removed precancerous polyps and found damage to my esophagus — evidence of my overuse of over-the-counter painkillers like Ibuprofen. I still had pain and nausea. I made the decision to quit nursing school and get a medical marijuana card. This was not an easy decision. I was out of work for almost four months. I couldn’t get out of bed on most days. The nausea crippled me.

“When I got my medical card, it saved my life,” she continues. “Cannabis helped me to deal with my mild-moderate chronic pain. I experimented with leaf, hash, oils, vaping, and edibles. Edibles are great for my more severe pain. For daily use, vaping THC at night for pain and insomnia gives me wonderful results. While during the day, CBD doesn’t affect me mentally, but treats my inflammation and nausea.”

Neither Anna nor Krista see MMJ as the ultimate fix for their endometriosis, but they do feel that it is the best way to relieve multiple symptoms. “I could work out: dance, surf, rollerblade, weight lift, and even rock climb,” says Anna of her experience. “I could have sex with the man I love again!”

Varied degrees of legalization have been enacted in 30 US states, but barriers to access remain in place: “The cost for the exam and license doesn’t seem prohibitive but for a single-income family of five it is,” says Krista, “especially since my son has medical needs that aren’t covered by insurance which means we have to choose who gets what they need – obviously we choose my kiddo (gladly); but that doesn’t mean my needs vanish.”

Beyond cost, the biggest problem these women face is stigmatization. Private companies subject employees to drug testing, putting women at risk of losing their jobs in states (like Delaware) that don’t have legislation in place to protect them. Women who use cannabis are often labelled as “bad mothers.” And many licensed MMJ users find themselves dismissed as stoners with no real discernible medical problems — as if chronic pain wasn’t enough to deal with. The answer? Country-wide legalization.

“I want all women to know and have access to all the possible choices and decide what’s best for their bodies,” says Anna. “Full legalization of cannabis allows me to freely choice the medicine that’s best for me.”

Do you think it should be easier to access medicinal cannabis in your state? Let’s talk about it on Twitter.