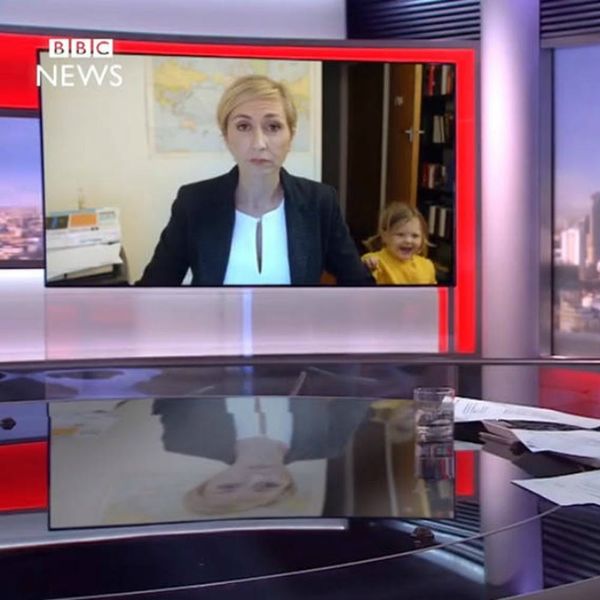 Since last week’s surprising live broadcast where political scientist and professor Richard E. Kelly was interrupted by his two small children during a BBC News interview, everyone’s gone gaga over how the father of two handled the situation (and how his wife stealthfully ninja’d her way in and out of the office). Of course, people wanted to parody the incident, and now, we’ve got BBC mom: the perfect example of how a working mom would have handled the same scenario.

In a comedy clip, we see a set dressed to look like Prof. Kelly’s in-home office. When a toddler walks in, the interviewee (in this case, a mom), picks the child up and proceeds to give her a bottle. When baby follows, mom hands her a rattle. Next, all while discussing the political matter at hand, mom cooks a chicken, cleans a toilet, and defuses a bomb. At the end of the interview, she signs off and goes to help her husband find a missing sock.

While moms on the internet are lauding this as comedy gold, some men are angry at the depiction, claiming that they work as hard as their wives at home. That, however, isn’t usually the case. Besides the very real wage gap, women work on average 39 more days a year than men, while we continue to do the bulk of what scientists call “emotional labor” — the little things that women need to do in order to get things done, like take note of what groceries to buy, to book and then take kids to appointments, or even having to do all the delegation of tasks even if their partner is doing 50 percent of the house work.

While some may think this is unrealistic, we really appreciate the way this parody shows how hard work-from-home parents actually have to hustle in order to get everything done.

Have you ever been a work-from-home parent? Tell us @BritandCo!

Kat Armstrong
Kat has been a writer, social media maven and mom for longer than she's willing to admit. She's also spent time in front of and behind the camera, interviewing celebs, politicians and acting as a producer for fashion and artistic photography shoots. When she isn't writing for various orgs and publications, she's hanging with her kids, husband and French Bulldog, Peter, in Toronto, Canada.
Parenting
Parenting
Parenting
More From Parenting