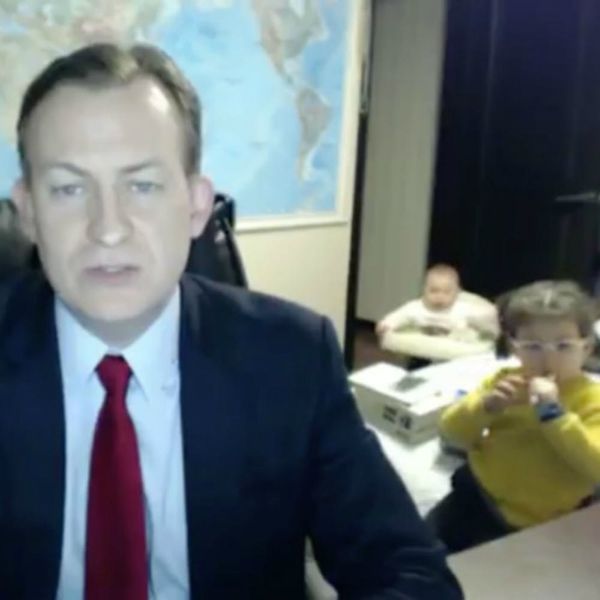 After last week’s now infamous interview with BBC News, Professor Kelly and his family have followed up their debut by explaining exactly how everything went down when Kelly’s two kids barged in on a very serious discussion regarding the state of South Korean politics, followed, a few moments later, by their frantic mother, Jung-A. The struggle truly is real for work-at-home parents, and the couple have hilariously spoken about their live-on-air ordeal, and it’s making us love them even more.

In an interview with The Wall Street Journal, the couple hilariously recount how dad Richard had spent the day on Skype interviewing with many major English language media outlets and the kids had just had enough. Wife Jung-A jokingly reminded him that he forgot to lock the door, and well, we all know what happened after that.

Our favourite live TV moment of the week by far 👶😂 pic.twitter.com/GXSCUl5hYI

According to Richard, daughter Marion was excited because she’d had a party at school to celebrate her birthday earlier in the day. Mom Jung-A mentioned that usually, the kids find the door locked and wander off, but she quickly noticed that the door was open and she went running with her now-famous ninja stealth. “It was chaos for me!” she said.

Even Korean media are taking notice, and have set up a press conference for the family to discuss the video. “I made this minor mistake that turned my family into YouTube stars,” Kelly said in the interview. “It’s pretty ridiculous.”

What is your most embarrassing work-from-home moment? Tell us @BritandCo!

Kat Armstrong
Kat has been a writer, social media maven and mom for longer than she's willing to admit. She's also spent time in front of and behind the camera, interviewing celebs, politicians and acting as a producer for fashion and artistic photography shoots. When she isn't writing for various orgs and publications, she's hanging with her kids, husband and French Bulldog, Peter, in Toronto, Canada.
Parenting
Parenting
Parenting