This Is Us Recap: Halloween Night 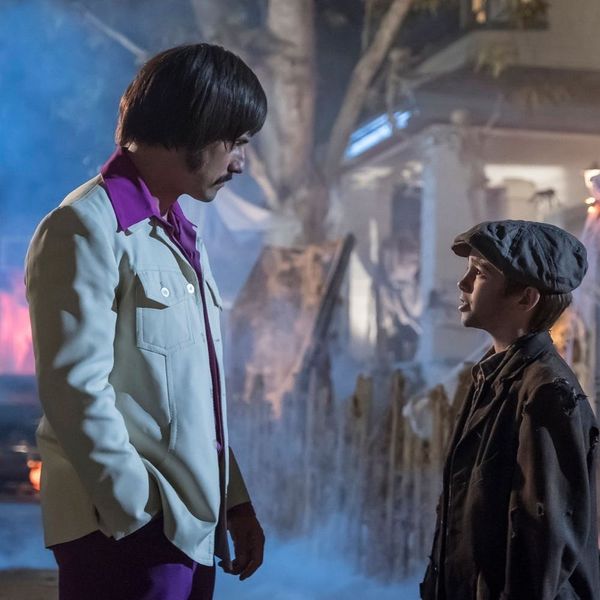 Last week, family secrets were revealed as This Is Us dropped the bombshell that Jack had a brother. This week, we were taken back to the past once more, viewing the Pearson family children through an entirely different lens: their 20s.

We’ve seen the Pearsons prior to Jack’s death, but when it comes to its follow-up, we’ve only seen the kids as full-grown adults. “The 20s” brings us back to a period after Jack’s death, but not so close to it that it still feels like an open wound. Still, it doesn’t mean its implications still aren’t felt, particularly for Jack, Randall, and Kate, who are still growing up.

The flashback gives us some insight into that first nervous breakdown Randall had before Beth had their first child, with the episode picking up two months after his incident on Halloween — the day before Beth is due. Randall is still rattled and distant, accidentally breaking the ceiling fan he’s trying to install for the baby. It’s all too much for him to bear, and he ends up breaking down. Beth tries to talk him down, but nothing works, and we see how complicated things are for Randall, who always pushed himself too hard.

Rebecca comes to visit, because according to Beth “it’s been a rough few months.” (Let’s be real, Beth’s a savior, guys.) Rebecca tries to make light of the situation and talk to Beth, but it’s clear she isn’t grasping (or acknowledging) the severity of what’s happening. It’s also clear that Beth needs someone to talk to, and Rebecca’s not exactly fitting the bill, attempting to break the mood by asking Beth on Facebook so she can be sure to see baby pictures.

Randall’s paranoid that he’s being watched during Beth and Rebecca’s visit, so he finally decides he’s going to go out and replace the ceiling fan. At the store, he meets the salesperson who will change his life — kind of. Randall opens up about his fears of becoming a father, expressing his worry that he won’t be good enough or know what to do, and how it’s all overwhelming him. The kind salesperson tells him he’s not supposed to know everything, and that he’ll figure it out when the baby comes, because the baby will have all the answers for him. Somehow, Randall is calmed by this.

Meanwhile, back in the past, it’s Halloween night in a different time period as the Pearsons leave to go trick-or-treating with some EPIC costumes: Jack and Rebecca are Sonny and Cher (eat your heart out, Kim Kardashian West!), Randall is Michael Jackson, Kate is “pretty Sandy” from Grease, and Kevin is a cigar-smoking bum — apparently his signature costume. Right away, there’s tension: Randall wants them to follow the map he’s drawn for trick-or-treating, but Kate and Kevin want to start at a haunted house. Jack and Rebecca end up splitting up with the kids, but not before calling each other out about their parenting skills with a little bit of bickering — Jack accuses Rebecca of being too soft around Randall, and Rebecca accuses Jack of being too soft around Kate. (No wonder poor Kevin feels left out!)

Kate wants to go to the haunted house with one of the popular boys from school, which Jack initially is wary of, not wanting to see her be rejected. He’s heartened when he sees her walking out of the haunted house with the kid, hand-in-hand, and is even more so to learn that their union is the result of Kevin’s doing: He gave the kid candy to spend time with his sister.

It’s a moment that will resurface in their relationship years later, when Kate is waitressing, trying to figure out how to have relationships with men in a manner that feels right (spoiler alert: not sleeping with random guys who hit on her). Kevin is similarly struggling. He’s jealous of his roommate who is getting all the good movie parts, and casually tries to elbow his way in to the part with the director (yeah, no).

Returning to the Halloween flashback, Rebecca tries to talk to Randall about his neurosis, having taken Jack’s criticisms to heart. She tries to tell him that things don’t have to be so rigid, but Randall gets upset and storms off. When his mother catches up to him, he reveals that one of the other families told him he was a “miracle child,” because Jack and Rebecca had lost their third baby. Randall takes this to mean that they physically lost him, and Rebecca is suddenly tasked with the huge burden of telling Randall about what happened that day at the hospital. We also learn that the third baby would have been named Kyle (which makes sense given the “K” themed names we have going on).

It’s a scene that ties into another blast from the past, though it’s one where everyone is older. Randall gets a call from Beth that she’s in labor a day early. Because the ambulance can’t get there in time, he ends up delivering his first child, and does it perfectly. While this should be a happy moment, Rebecca finds herself crying because Jack isn’t here to share in their joy. It’s a heart-breaking scene in which the viewer really begins to grasp how much of a hole has been left in the lives of the Pearsons with their patriarch missing.

Naturally, the birth of Randall’s son brings everyone together, even though everything isn’t “perfect” — the siblings acknowledge the lows in their life, for the first time admitting how hard things are. Kevin and Kate end up helping each other by offering advice, which further cements just how close these two are and have always been.

As for Rebecca? Well, this is where we find out exactly how Rebecca and Miguel wound up together. And it’s by everyone’s favorite form of communication — Facebook!

It’s official: This Is Us never fails to surprise us!

Did you enjoy seeing the Pearson kids in a different timeline? Tell us over @BritandCo.