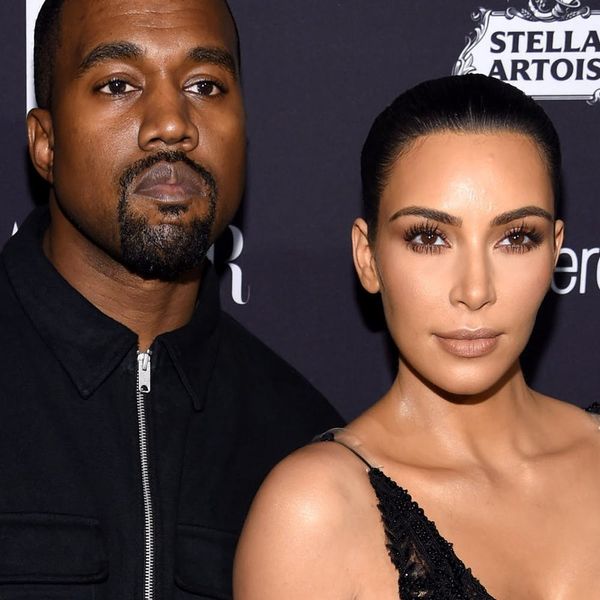 If there’s one thing we love more than a good celeb Halloween costume, it’s a good celeb COUPLES’ costume (like the one Sarah Hyland and Wells Adams sparked major relationship buzz). Kim Kardashian West caused a splash this weekend with not one, but TWO looks inspired by iconic duos, but there was one noticeable element missing from both: her husband, Kanye West!

The “Fade” rapper was nowhere to be seen for his wife’s recreations of RL couples, which she pulled off with the help of both her longtime family friend, Jonathan Cheban, and sis Kourtney Kardashian.

The first was a nod to the reality star’s style idol, Cher (who she also paid homage to with a recent photoshoot in Harper’s Bazaar Arabia), and her late husband, Sonny Bono, from their 1973 Oscars appearance. The KUWTK star nailed the songstress’s look, from her yellow “Dream of India” Bob Mackie two-piece ensemble, right down to her dagger-style pink nails. Cheban, meanwhile, looked plenty authentic with his spin on Bono’s geometric suit, famed ‘stache, and hairpiece.

The second was a recreation of the gorgeous white sequined Bob Mackie gown Madonna wore for the 1991 Oscars alongside Michael Jackson in a leather pant and blazer combo, with Kardashian West playing the Madge to her sister’s MJ in a Yousef Aljasmi dress.

With no social media accounts of his own to speak of, it was unclear whether West, 40, did his own thing for the holiday or simply wasn’t feeling the Halloween spirit. But either way, it was a good reminder that you don’t need to be in a relationship to pull off a totally epic couples’ look!

Do you think Kim’s looks would’ve been better with Kanye? Tell us over @BritandCo.