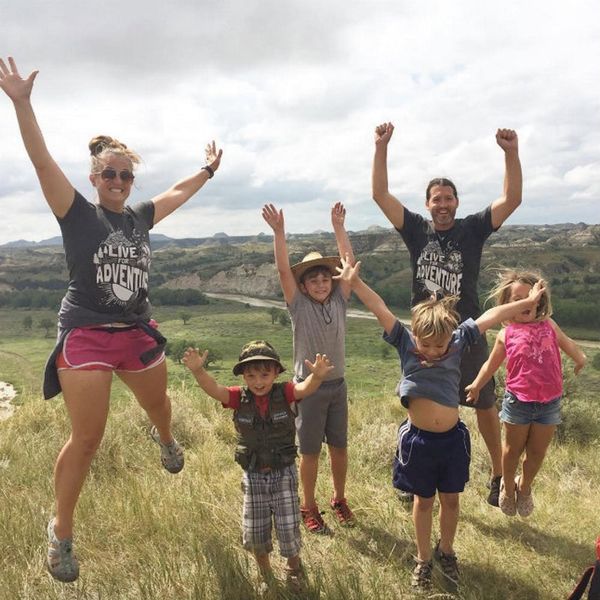 Imagine selling almost all of your belongings, saying farewell to friends and family and then, not unlike a newfangled nomad, traveling with your children all over the globe. Sounds dreamy, scary, fantastic, bold and totally adventurous, doesn’t it? These six families took that plunge and travel full-time with their families while also figuring out how to become successful travel bloggers. They work on the road, homeschool or unschool and are giving their children the gift of globe-trotting experiences they’ll never forget.

1. Travel With Bender: Erin and Josh Bender began their nomadic adventure in May 2012. “We’ve been traveling the world for years. It was supposed to be a six-month trip — four years later, we’ve been to 67+ countries and there’s no end in sight,” Erin tells us while she’s chillin’ with her family in Playa Del Carmen, Mexico. After Mexico, the fam will head to “a lot more places until Christmas, like Canada, Hawaii, Bali and Australia,” Erin informs us. Yeah, we wish we were a Bender too! Check out their blog for tips on traveling with kids and awesome family-friendly itineraries for cities all over the world. (via Travel With Bender)

Hiked to the top of a hill by our campsite. It was beautiful and had an awesome view of the Badlands! #northdakota #ndlegendary #badlands #crazyfamilyadventure

2. Crazy Adventure Family: “We’re a family of six, plus two dogs, who sold our house, bought an RV and have been traveling around the US for over two years,” Bryanna Royal of Crazy Adventure Family tells us. Bryanna and her husband Craig (who were high school sweethearts) have an eight-year-old, a set of six-year-old twins and a four-year-old. Currently, they’re taking a break as they visit family in their hometown of Kenosha, WI. But they won’t be sitting still for long. They’ll soon be leaving for Glacier National Park for a month or two, and then they’ll be heading to Canada and perhaps Mexico in the winter. Their site follows their adventures and life on the road with articles like “11 Ways You Know You Have Full-Time RV Kids” and “Learn How to Travel and Earn Money from Anywhere.”

3. 1Dad1Kid: Talon Windwalker and his teenage child Tigger (who recently came out as transgender, a topic which Talon beautifully wrote about) have been traveling the world for five years. Talon is a single dad, author, writer, former hospice chaplain, Zen monk, ultra runner, snowshoer, endurance cyclist, certified endurance running coach, scuba instructor and photographer, so of course globe-trotter would be the natural next step.

In 2011, Talon left his traditional work life behind, and he and then nine-year-old Tigger began their full-time nomadic life. Tigger is “world schooled,” as Talon teaches language, writes, does photography, teaches scuba and does online work during their travels. Talon tells us they’re currently in Hungary, but will soon hit the Netherlands and the UK. (via 1Dad1Kid)

Adventure is possible with kids in tow! We went paddle boarding for the first time this morning and Lee paddled Reuben around like a pro.

4. Flashpacker Family Travel: Bethaney Davies, her husband and their two kids (ages six and two), traveled the world from August 2014 to this past February, when they put down stakes in Christchurch, New Zealand (so their older son could start school). In 18 months, they’ve covered 34 US states, Canada, Mexico and much of Europe — and have taken two Caribbean cruises. But even though they have a home base now, that isn’t stopping their travels. They’ll spend the rest of 2016 exploring New Zealand, Australia and the South Pacific. Not bad for settling down a bit!

5. Edventure Project: Back in 2008, the Millers sold their house and most of their belongings, and took their four kids on an epic adventure. The first year they toured most of Europe and part of North Africa on bicycles (yes, bikes) with all four of their kids. Fast forward to today, and they’ve been traveling full-time for the last seven years, covering six continents. As for education, Jennifer Miller says, “We decided, before we ever had kids, not to send our children to school.” She home/road/world-schooled her kids and has spent “10 years in educational consulting and curriculum design for families who desire to create a living education for their children,” hence the name Edventure Project, natch. (via Edventure Project)

Easy enough for kids. Tasty enough for adults. Our favorite backpacking recipes and meals up on @theoutbound today!! Link in profile. 👉

6. Currently Wandering: As of this posting, the Curren family of five has been on the road for 912 days. They travel full-time in style via a gorgeous shiny Airstream. They began their adventure with a house swap, invested in the Airstream in 2013, sold their house in spring 2014 and officially drove away from their old life in the summer of 2014. Their tight-knit crew lives in 188 square feet of space, and do so comfortably, while Dad works remotely as a programmer for a Utah-based company and Mom homeschools the kids. Cozy and apparently efficient.

Would you ever sell everything and travel the globe with your kids? Tweet us @BritandCo and let us know!

Sunny Chanel
Sunny Chanel is a freelance writer as well as the founder of the whimsical site Wonder and Company. When this proud San Franciscan isn't writing, working on her fixer-upper or doing crafts, she is playing dress up with daughter and planning her next trip to Disneyland.
Family
Travel
Family Parenting
More From Travel