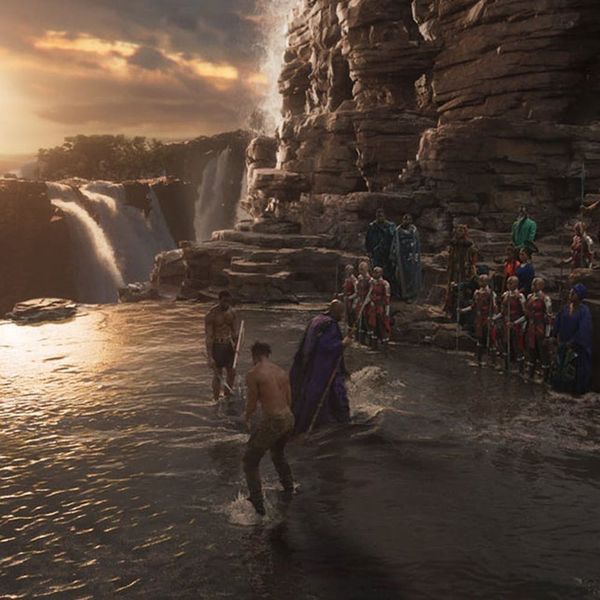 After seeing Marvel’s Black Panther, we wanted to escape to Wakanda IMMEDIATELY. The city, the country, and all those vivid vistas conjured up a vibrant and visually stunning land that we wish really did exist. While the tech-savvy utopia that is Wakanda is far from real (major sad face), some of the locations featured in the film certainly are. TravelPirates, a site specializing in travel deals, tipped us off to a list of the destinations that inspired the film and the real-world locations featured in it. These places may be devoid of T’Challa, the five tribes, and the incredibly fierce and fashionable Dora Milaje, but they do still possess that Black Panther DNA. Oh, and you can revisit the on-screen version of Wakanda (and ignite that wanderlust) when the film comes out on DVD on May 15th.

The Continent of Africa: “Africa is such a huge nation…” Black Panther screenwriter Joe Robert Cole told Cinema Blend. “We wanted to root it in reality first and then build out from there, so we’d feel pretty authentic and grounded.” That’s one of the things about Wakanda — it feels REAL, and like Africa. But the truth is that the filmmakers didn’t shoot any scenes there, but rather looked to a few of the continent’s countries — such as Uganda, Kenya, South Africa, Zambia, Ghana, and the Congo — as their inspiration, and then created a wholly original locale. (Photo via Marvel Studios)

Uganda: While almost all of what was supposed to be Africa was shot on a soundstage, there was some spectacular aerial photography included in the film of Uganda (as well as South Africa and Zambia). Uganda’s Rwenzori Mountains and Bwindi Impenetrable National Park in southwest Uganda are two areas that made the cut. There are also two Ugandans in the cast — Daniel Kaluuya (of Get Out fame) and Florence Kasumba (who plays Ayo). (Photo via Getty)

South Africa: The filmmakers did visit Africa to get real-world inspo though. Production designer Hannah Beachler and her team took a research trip to South Africa to visit Blyde Canyon and Table Mountain, and to explore the coast. Beachler took particular care to document the rocks and plant life which went into the “design language” of Wakanda. Speaking of language, in Black Panther, T’Challa speaks to his father in Xhosa, a language rich with clicks and which is one of the official languages of South Africa (as well as Zimbabwe). The Wakanda vibe is indeed alive and well here. (Photo via Getty)

Busan, South Korea: While the real Africa wasn’t used in the movie, the real South Korea sure was. The crew shot scenes at the Jagalchi Fish Market near Nampodong, by Gwangalli Beach, in Marine City in the Haeundae District, and on the Gwangandaegyo Bridge. The filmmakers went all out for the epic car chase on the bridge; they reportedly had 150 cars and more than 700 people involved in that scene. (Photo via Marvel Studios)

Atlanta, Georgia: Pinewood Studios in Atlanta has been the home to many a Marvel movie including Avengers: Age of Ultron, Avengers: Infinity War, Captain America: Civil War, and Ant-Man. Black Panther also shot at the brand new soundstages of Tyler Perry Studios, which is in Atlanta as well. The crew didn’t spend all of their time in the soundstages (thankfully), so there are a couple of real-world locations you can visit in Atlanta. The High Museum of Art stood in for the Museum of Great Britain in London, and Atlanta’s City Hall served as a United Nations building. If you thought you were seeing the real Oakland (which happens to be the hometown of director Ryan Coogler), it was actually the Sweet Auburn neighborhood in Atlanta. And that battle between T’Challa and Erik Killmonger that looks like it takes place in the African countryside? That was reportedly shot at Bouckaert Farm about 15 miles from the Atlanta airport. (Photo via Getty)

Iguazu Falls, Argentina: We are thrilled to report that those awe-inspiring waterfalls of Wakanda do exist. The wide shots of the falls were filmed at the Iguazu, located on the border of Argentina and Brazil in South America. Besides being in Black Panther, the big claim to fame for these falls is that they make up the largest waterfall system in the world. If you head to this natural wonder, make sure to book a room at the luxurious Belmond Hotel das Cataratas, situated in the midst of the rain forest and right on the edge of the falls. Major vacation goals. (Photo via Belmond Hotel das Cataratas)

The Buildings of Architect Zaha Hadid / Various Locations:Black Panther’s production designer Beachler told Collider that she “fell in love” with the work of late architect Zaha Hadid. “Her architecture is very voluptuous and very flowing, very organic,” she said. A few buildings to visit include Dongdaemun Design Plaza in Seoul, Korea, the Heydar Aliyev Center in Baku, Azerbaijan, and Jockey Club Innovation Tower at the Hong Kong Polytechnic University. (Photo via Getty)

Which Black Panther location would you most like to visit? Let us know @BritandCo!

Sunny Chanel
Sunny Chanel is a freelance writer as well as the founder of the whimsical site Wonder and Company. When this proud San Franciscan isn't writing, working on her fixer-upper or doing crafts, she is playing dress up with daughter and planning her next trip to Disneyland.
Movies
Travel
Movies Travel Vacation