8 Trends You Should Totally Steal from Mens Fashion Week 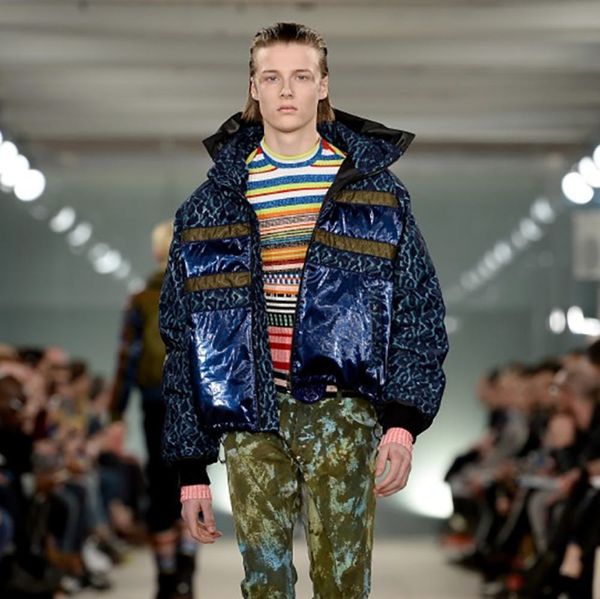 We talk about how it’s always five-o’clock somewhere, but its sartorial equivalent — it’s Fashion Week somewhere — is probably just as relevant. Between the fall and spring collections, there’s also pre-fall and resort, PLUS all those other shows that seem to sneak in under the radar. While we’re anxiously awaiting a peek at what’s on the horizon for fall/winter 2016, Men’s Fashion Week is in full swing. Though it might not be your first stopping off point for new seasonal inspiration, there are plenty of hot-off-the-runway looks that effortlessly transcend gender. We scanned the runways and pulled eight unexpected but totally wearable trends that you can steal from the boys to wear yourself.

1. Edgy Florals: Floral prints were in full bloom at Tiger of Sweden, Alexander McQueen and Moschino, but not the ethereal, feminine variety that womenswear seems to reinvent each season. Backed on leather or displayed in high-octane color, there was nothing frilly about these fall blossoms. Make the look yours by pairing dainty patterns with buckled ankle boots, sleek, minimal jewelry and pops of electrifying hues. (Photo via John Phillips/Getty)

2. Cinched Sweaters: It looks like even the guys like a little bit of definition, or so suggests the belted sweater trend that appeared on the Lou Dalton catwalk and beyond. The understated detail is simply genius: It adds shape to oversized sweaters with the click of a buckle. Opt for a belt with a medium width, then complete the look with pumps and a set of statement studs. (Photo via Luca Teuchmann/Getty)

Designers capitalized on the cape by presenting their own interpretation of the outerwear that’s so popular in women’s fashion. What appeared to be oversized scarves were draped over the body in an asymmetric fashion, giving suave suits a bit of bohemian or old-world flair (so debonair). This idea comes conveniently just in time for winter, using fashion as a guise to stay even warmer. Push the boundaries by pairing a vibrant scarf with a sharply tailored coat in an intricate print or a brilliant shade of white. (Photo via Tristan Fewings/Getty)

Ensembles with enlisted edge proved that leather isn’t the only way to inject an outfit with attitude. Forget the standard surplus shirts or lightweight khaki parkas for your own look and go straight for the heavy stuff: warm woolen coats in boxy cropped shapes and combat boots à la Dr. Martens. For an unexpected twist, pair up your military-issued pieces with flowy frocks and flirty, flowery prints. (Photo via Jeff Spicer/Getty)

The savvy suit-and-tie look has a stronghold on the men’s collections, but that didn’t stop standout off-duty looks from ruling the runway. Look-at-me patterns were combined with a spectrum of silhouettes to create sculptural looks that give new meaning to the idea of mixed prints. The most intriguing aspect? Color — and lots of it. Instead of choosing one hue to tie the look together (a typical mixing strategy) designers went out on a limb and gave each element its own unique palette for added drama and depth. Recreate the look with a fuzzy teddy coat, striped wide-leg trousers and a bright cotton tee. (Photo via Jeff Spicer/Getty)

6. Super Oversized Sweaters: Your favorite cozy knit is about to get even better. The extra roomy silhouette will engulf you in warmth while providing plenty of room for a few extra layers. Head to the menswear department (or your guy’s closet) for a ribbed cardigan and style it with relaxed-fit jeans, clogs and a few glitzy baubles for a polished finish. (Photo via Jeff Spicer/Getty)

7. Britpop Suits: Designers defied dress code with pop art-inspired colors and funky fabrics, making a strong argument for showing off personality both in and out of the office. Diversify your own workweek repertoire with office essentials like blazers, trousers and blouses in non-traditional palettes. (Photo via Luca Teuchmann/Getty)

8. New Twists on the Tie: Ties are standard office fare, but there’s no rule that says there’s only one way to wear them. A new way to knot allows the everyday accessory to take on new life. Worn close to the neck instead of down low, it brings an element of sophistication beyond the suit. Treat it like a skinny scarf and wear it with everything from shift dresses to fuzzy sweaters and moto jackets. (Photo via Stefania D’Alessandro/Getty)

Libby MacCarthy
Libby MacCarthy is an urban planner turned writer with a love (bordering on unhealthy obsession) of all things fashion and beauty related. She lives for perfectly brewed coffee, farmer's markets, dinner parties and perusing impeccably designed boutiques. When she's not on the hunt for the latest trends, you'll likely find her plotting her next adventure or nose deep in a book. Libby currently splits her time between the East Coast and her adopted home of France. Follow her daily adventures on Instagram.
Fashion Week
Style News
Fashion Week Men's Style
More From Style News