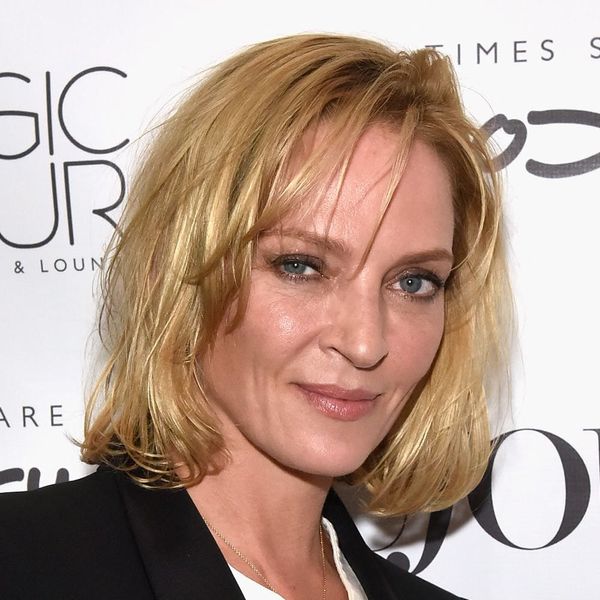 Uma Thurman was one of many parties affected by the seemingly countless tales of sexual assault and harassment that began to pour forth from Hollywood back in October. When asked about the allegations being brought forth against her former producer, Harvey Weinstein, she became visibly upset, saying, “I am not a child… and I have learned that when I’ve spoken in anger, I usually regret the way I express myself, so I’ve been waiting to feel less angry. And when I’m ready, I’ll say what I have to say,” she told Access Hollywood. Now, it appears that time has come.

In November, the Imposters actress took to social media with a battle cry not unlike one her Kill Bill character, Beatrix Kiddo, would have made in the film, saying, “I said I was angry recently, and I have a few reasons. #MeToo, in case you couldn’t tell. I think it’s important to take your time, be fair, be exact, so… Happy Thanksgiving everyone! (Except you, Harvey, and all your wicked conspirators — I’m glad it’s going slowly… Stay tuned.”

H A P P Y T H A N K S G I V I N G I am grateful today, to be alive, for all those I love, and for all those who have the courage to stand up for others. I said I was angry recently, and I have a few reasons, #metoo, in case you couldn’t tell by the look on my face. I feel it’s important to take your time, be fair, be exact, so... Happy Thanksgiving Everyone! (Except you Harvey, and all your wicked conspirators - I’m glad it’s going slowly - you don’t deserve a bullet) -stay tuned Uma Thurman

Thurman, 47, has just delivered on her promise of more to come, opening up to The New York Times about her own experiences with Weinstein and the Hollywood machine.

Though she says Weinstein was not her first encounter with sexual misconduct in the business, having been the victim of assault at the hands of an older, undisclosed actor at the age of 16, her experience with the disgraced movie mogul is one she’s carried with her for years.

“I knew him pretty well before he attacked me,” she told the outlet. “He used to spend hours talking to me about material and complimenting my mind and validating me. It possibly made me overlook warning signs.”

While Thurman told the Times she did have unusual encounters with Weinstein, recalling one instance in which she says he led her into a steam room in a bath robe, she “didn’t feel threatened. I thought he was being super idiosyncratic, like this was your kooky, eccentric uncle.”

Things took a turn, however, with the actress alleging that he attacked her in a hotel room in London. “It was such a bat to the head,” she said. “He pushed me down. He tried to shove himself on top of me. He tried to expose himself. He did all kinds of unpleasant things. But he didn’t actually put his back into it and force me. You’re like an animal wriggling away,” she explained. “I was doing anything I could to get the train back on track. Not his track, my track.”

She says she received flowers from Weinstein afterward, and calls to work on more projects. When she tried to confront him about his behavior, however, the Pulp Fiction darling claims that the 65-year-old threatened to derail her career.

A spokesperson for Weinstein denies that he ever threatened her in a professional capacity, though “he acknowledged her accounts of the episodes,” according to NYT.

Thurman says Weinstein eventually apologized for his behavior after being confronted by Tarantino, who was about to make Kill Bill with both parties.

The producer released a statement (along with several pictures of the pair) from his camp confirming the apology, though he disputes other details of her allegations, saying, “Mr. Weinstein acknowledges making an awkward pass 25 years ago at Ms. Thurman in England after misreading her signals, after a flirtatious exchange in Paris, for which he immediately apologized and deeply regrets. However, her claims about being physically assaulted are untrue. And this is the first time we have heard those details. There was no physical contact during Mr. Weinstein’s awkward pass and Mr. Weinstein is saddened and puzzled as to “why” Ms. Thurman, someone he considers a colleague and a friend, waited 25 years to make these allegations public, noting that he and Ms. Thurman have shared a very close and mutually beneficial working relationship where they have made several very successful film projects together.”

Later, while on set, Thurman was also subject to injury when she says that Tarantino demanded she do her own driving for the film’s infamous black and white scenes in a car that had been reconfigured from a stick shift to an automatic. Despite warnings that it “might not be working well” and against her better judgement, she filmed the scenes as directed.

The star wound up crashing, coming back from the hospital “in a neck brace, with my knees damaged and a large massive egg on my head and a concussion.”

While she says she has a “permanently damaged neck” and “screwed-up knees,” it’s her “complicated” feelings about Weinstein’s’ subsequent victims that perhaps haunt her most.

“I am one of the reasons that a young girl would walk into his hotel room alone, the way I did,” she said. “Quentin [Tarantino] used Harvey as the executive producer of Kill Bill, a movie that symbolizes female empowerment. And all these lambs walked into slaughter because they were convinced that nobody who rises to such a position would do something illegal to you, but they do.”

Read her interview in full here.

What do you think of Uma’s chilling words? Share with us over @BritandCo.

Nicole Briese
Nicole is the weekend editor for Brit + Co who loves bringing you all the latest buzz. When she's not busy typing away into the wee hours, you can usually find her canoodling with her fur babies, rooting around in a bookstore, or rocking out at a concert of some sort (Guns N' Roses forever!). Check out all her latest musings and past work at nicolebjean.com.
Celebrities
Current Events
Celebrities Controversy