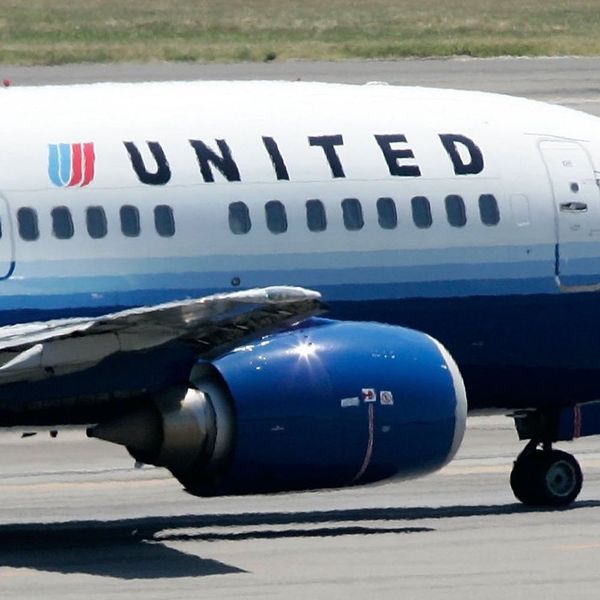 United Airlines is in hot water with customers after a passenger flying the airline this morning observed and Tweeted about a group of tween girls who were denied boarding privileges on the airline for wearing an item many of us fly in on a daily basis: leggings.

Twitter user @shannonwatts (AKA the founder behind Moms Demand Action) caused a stir when she Tweeted the news that a gate agent forced the girls to either change or put dresses over their spandex bottoms.

1) A @united gate agent isn't letting girls in leggings get on flight from Denver to Minneapolis because spandex is not allowed?

2) She's forcing them to change or put dresses on over leggings or they can't board. Since when does @united police women's clothing?

3) Gate agent for flt 215 at 7:55. Said she doesn't make the rules, just follows them. I guess @united not letting women wear athletic wear?

United was quick to respond, telling Watts that in their “contract of carriage, Rule 21, we do have the right to refuse transport to passengers who” are not “properly clothed.”

A 10-year-old girl in gray leggings. She looked normal and appropriate. Apparently @united is policing the clothing of women and girls. https://t.co/RKsIFoE8pq

Watts wasn’t having it, however, saying that the 10-year-olds in question looked “normal and appropriate.”

At least two famous faces, Patricia Arquette (who also called out the Oscars for their failing to include her trans sister in its memoriam segment) and Chrissy Teigen, were in complete agreement, and took to social media to say so:

@united Leggings are business attire for 10 year olds. Their business is being children.

I have flown united before with literally no pants on. Just a top as a dress. Next time I will wear only jeans and a scarf.

United Airlines, for its part, is standing its ground, Tweeting that the passengers were “pass travelers” (which means that they were free standby guests of United employees), and saying that the attire worn by the girls did not meet pass travel clothing requirements.

The passengers this morning were United pass riders who were not in compliance with our dress code policy for company benefit travel.

@PattyArquette Casual attire is allowed as long as it looks neat and is in good taste for the local environment. (1/2)

As a spokesman for the airline, Jonathan Guerin, told The New York Times “It’s not that we want our standby travelers to come in wearing a suit and tie or that sort of thing,” but such passengers are “representing the company. We want people to be comfortable when they travel as long as its neat and in good taste for that environment.“

According to CNN Money, who spoke to another United employee, those requirements mandate that passengers refrain from wearing anything that doesn’t look “neat and professional,” including “form-fitting lycra or spandex tops, pants, and dresses.”

Watts pointed out the sexism of the company’s rules, telling the Times that the group’s patriarch wasn’t held to such high standards. “Please keep in mind that the dad had on shorts that not hit his knee — they stopped maybe two or three inches above his knee — and there was no issue with that,” she said.

2) This behavior is sexist and sexualizes young girls. Not to mention that the families were mortified and inconveninced.

3) As the mother of 4 daughters who live and travel in yoga pants, I'd like to know how many boys @United has penalized for the same reason.

The incident is reminiscent of a similar incident last summer, when JetBlue refused to let a woman board for wearing a pair of zebra shorts the airline deemed “inappropriate.” In that instance, while JetBlue initially defended its employee’s decision, the company was forced to apologize and issue credit after backlash grew over media attention.

We’ll be curious to see if United soon follows suit.

What do you make of United’s #LeggingGate? Tell us over @BritandCo.

Nicole Briese
Nicole is the weekend editor for Brit + Co who loves bringing you all the latest buzz. When she's not busy typing away into the wee hours, you can usually find her canoodling with her fur babies, rooting around in a bookstore, or rocking out at a concert of some sort (Guns N' Roses forever!). Check out all her latest musings and past work at nicolebjean.com.
twitter
Entertainment
twitter
More From Entertainment