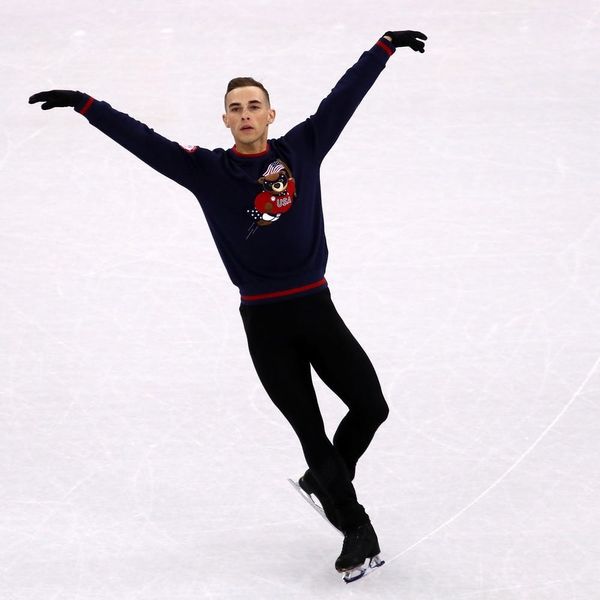 The 2018 Winter Olympics are just around the corner. The opening ceremonies will take place in PyeongChang, South Korea on Friday, and some events have already started. Team USA is comprised of 242 athletes this time around, two of whom are the very first openly gay athletes to compete for the United States in the Winter Olympics. Their names are Gus Kenworthy and Adam Rippon, and both of them have already called out the Vice President Mike Pence — who has been chosen to lead the White House delegation to the Olympic games — for his anti-LGBTQ+ statements and policies.

v v excited to share the @PoloRalphLauren Opening Ceremony look with y'all! Can't believe it's only two weeks away! For every like this post gets or any likes on any reposts with #HeatTheWayForTeamUSA from 1/22 12:00am ET to 1/23 at 12:00am ET, Ralph Lauren Corporation will donate $1 (up to a maximum of $100k) to the USOC. #ad @RalphLauren

Rippon has been in the headlines a lot in recent weeks, and has a bit of a feud going with the vice president.

I was recently asked in an interview what its like to be a gay athlete in sports. I said that it’s exactly like being a straight athlete. Lots of hard work but usually done with better eye brows.

Rippon is a 28-year-old from Scranton, Pennsylvania (yes, the same town as The Office) and publicly came out as gay in 2015. In an interview with SKATING magazine in October 2015, Rippon said, “Being gay is not something that defines me. What defines me is what my mom always taught me: to treat everyone with respect, to always be a hard worker and to be kind. Those are the things that define me.”

Rippon added that he wants to be a “relatable example” for others: “When athletes come out and say that they’re gay, it makes it a little more normal and less of a big deal—especially in the athletic community.”

Rippon made his sexual orientation public about a year after the 2014 Sochi, Russia Winter Games. Russia had recently passed anti-gay “propaganda” laws that empowered the government to jail gay people just for being gay. According to Them, Rippon didn’t speak out about the issue at the time (he didn’t make the Olympic team that year), but his training partner, Ashley Wagner, spoke out in opposition to the homophobic laws.

But this time around, Rippon is on the team and has been vocal in his opposition to homophobia. Which brings us to Vice President Mike Pence.

Mike Pence has been notoriously anti-LGBTQ+ throughout his political career. In 2006, Pence said in a speech that “societal collapse was always brought about following an advent of the deterioration of marriage and family,” and that being gay is a “choice.” As governor of Indiana, Pence supported the Religious Freedom Restoration Act, which allows businesses to refuse to service LGBTQ+ people based on “religious freedom.” He has also supported so-called gay conversion therapy, a thoroughly debunked pseudo-psychology aimed at turning gay people straight.

Pence denies that he ever supported gay conversion therapy, despite having once said that “resources should be directed toward those institutions which provide assistance to those seeking to change their sexual behavior.”

In a January interview with USA Today, Rippon sounded off on Pence being selected to lead the US Olympic delegation: “You mean Mike Pence, the same Mike Pence that funded gay conversion therapy?” Rippon also said he doesn’t think Pence “has a real concept of reality” where LGBTQ+ issues are concerned, and quipped that Pence’s homophobic views mean he’s not a true Christian.

“To stand by some of the things that Donald Trump has said and for Mike Pence to say he’s a devout Christian man is completely contradictory,” Rippon said. “If he’s okay with what’s being said about people and Americans and foreigners and about different countries that are being called ‘shitholes,’ I think he should really go to church.”

A spokesperson for Pence told USA Today that “despite these misinformed claims [about conversion therapy], the vice president will be enthusiastically supporting all the US athletes competing next month in Pyeongchang.”

This week, USA Today reported that Pence reached out to the Olympic Committee in an attempt to set up a meeting with Rippon following his criticisms of the vice president. Pence also sent out a pair of tweets from his official vice presidential Twitter account, calling the accusations that he supported conversion therapy “fake news” and stated that he supports “ALL” of Team USA’s athletes.

.@Adaripp I want you to know we are FOR YOU. Don’t let fake news distract you. I am proud of you and ALL OF OUR GREAT athletes and my only hope for you and all of #TeamUSA is to bring home the gold. Go get ‘em!

Headed to the Olympics to cheer on #TeamUSA. One reporter trying to distort 18 yr old nonstory to sow seeds of division. We won’t let that happen! #FAKENEWS. Our athletes are the best in the world and we are for ALL of them! #TEAMUSA

News outlets are speculating whether the athlete and Vice President will meet up to talk things out in PyeongChang. USA Today reported Wednesday that Rippon had turned down a meeting with Pence. But in his January interview with USA Today, Rippon said: “If I had the chance to meet [Pence] afterwards, after I’m finished competing, there might be a possibility to have an open conversation.” He echoed this statement in comments he made to reporters today when he refused to confirm or deny he’d turned down a meeting with Pence, but said: “After the competition, I’m open to meeting him and having an open conversation, but opening ceremonies are tomorrow and I’ve been really focused.”

Meanwhile, Rippon has been getting support from some more progressive famous fans. This week Reese Witherspoon Tweeted that Rippon is “Reason #1 to watch” the Winter Olympics. Rippon responded with a re-tweet that reads, “WHEN YOU’RE RIGHT, YOU’RE RIGHT.”

WHEN YOURE RIGHT, YOURE RIGHT, @RWitherspoon ❤️❤️❤️ Also!! Quick movie idea for you: You (played by you) tweet me in the middle of the night at the Olympics and I (played by me) die immediately. Thoughts? https://t.co/2p9b11QxEl

Gus Kenworthy has also called Pence out, but hasn’t received as much attention from the press or the VP. Kenworthy is a 26-year-old freeskier who was born in the United Kingdom. In an appearance on Ellen earlier this week. Kenworthy told Ellen DeGeneres, “To have someone leading the delegation that’s directly attacked the LGBT community… seems like a bad fit.” The skier added that he feels “like the Olympics is all about inclusion and people coming together, and it seems like it’s not really doing that.” DeGeneres agreed that Pence was a “weird choice.”

At the moment, both athletes seem intent on focusing on the big competitions ahead, and want to put Mike Pence on the back burner for now. Perhaps after the Games, Rippon will have a conversation with Pence, but it’s clear that neither Rippon or Kenworthy want Pence with them for the Olympics.

What do you think of Mike Pence being chosen to lead the US delegation at the 2018 Winter Olympics? Tell us on Twitter @BritandCo.

Elizabeth King
Elizabeth King is a politics, history, and culture writer based in the Twin Cities. She is generally pretty cranky but still enjoys traveling, music from the early 2000's, and plotting the resistance. Feel free to say hi on Twitter at @ekingc or check out some of her work at www.elizabethcking.com.
Controversy
Politics
Controversy Olympics Politics
More From Politics