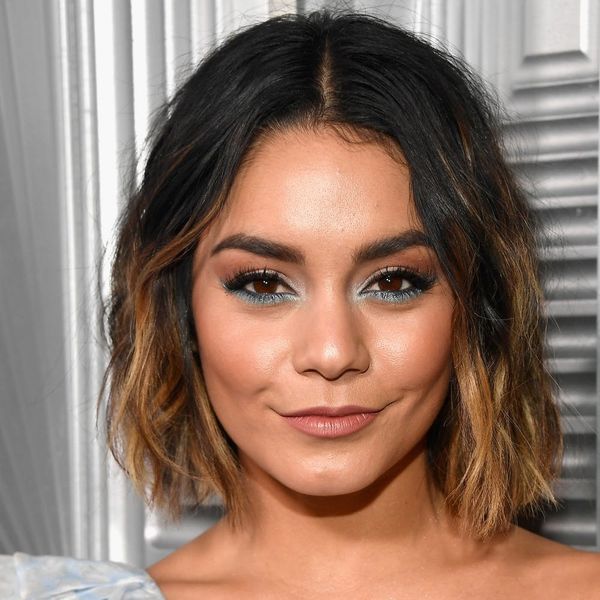 When it comes to celebs, eagle-eyed fans are eager to notice even the most seemingly minute details on social media — just ask Khloé Kardashian! Vanessa Hudgens is the latest star to have followers in a tizzy after posting few photos on Instagram which showed off a new (and massive!) sparkler on her ring finger, sparking speculation that she may be engaged to longtime boyfriend Austin Butler, who she’s been dating since late 2011.

Hudgens, who just celebrated her 29th birthday, first posted a video of herself embracing Second Act costar Jennifer Lopez on Saturday in celebration of the wrap for the upcoming romantic comedy. While both of the women undoubtedly looked gorgeous, fans couldn’t help but notice the gorgeous bauble on Hudgens’ left ring finger.

The “Reminding Me” singer then added more fuel to the fire by posting the below selfie, sporting her chic new haircut (along with her ring), captioning the shot, “And then this happened.”

But she wasn’t finished teasing us yet! Later the same day, she posted another selfie, this time to hype her glittery new manicure — all the better to make her sparkler, which appeared to be comprised of a gold band with a single round center stone, really pop. “Oh snap. She got them nails back,” she wrote.

Though it seemed as though an engagement announcement was definitely on the way, the Powerless actress quickly took to Twitter to shut down any potential wedding rumors.

Guysssss. I’m not engaged! I️ posted a pic. Not to show off my ring that I️ happened to throw on that finger after a long day of filming but to show off my haircut Lol 🤦🏻‍♀️💁🏻 pic.twitter.com/xfgqcFddHt

“Guyssss, I’m not engaged!” she wrote. “I posted a pic. Not to show off my ring that I happened to throw on that finger after a long day of filming but to show off my haircut, lol.”

She certainly wouldn’t be the first to make her left ring finger her digit of choice when wearing her bling — Kylie Jenner and Demi Lovato have both donned baubles in the same spot without an engagement to speak of in the past, making it clear that it’s no longer solely reserved for symbolism.

Either way, it’s a gorgeous piece to admire — we’d be sharing pics of it too!

Do you think Vanessa and Austin are secretly engaged? Let us know @BritandCo!

Arielle Tschinkel
Arielle Tschinkel is a pop culture junkie who went to NYU because the Olsen twins went to NYU (really). She is a freelance writer whose work has also been featured on HelloGiggles, Refinery29, SheKnows, Bustle, Hollywood.com, and many others; and she's living her dream one Britney Spears GIF at a time. Follow her on Twitter @mrstschinkel or visit her website at arielletschinkel.com.
Celebrities
Celeb Style
Celebrities Celebrity Couples Engagement Rings love rings