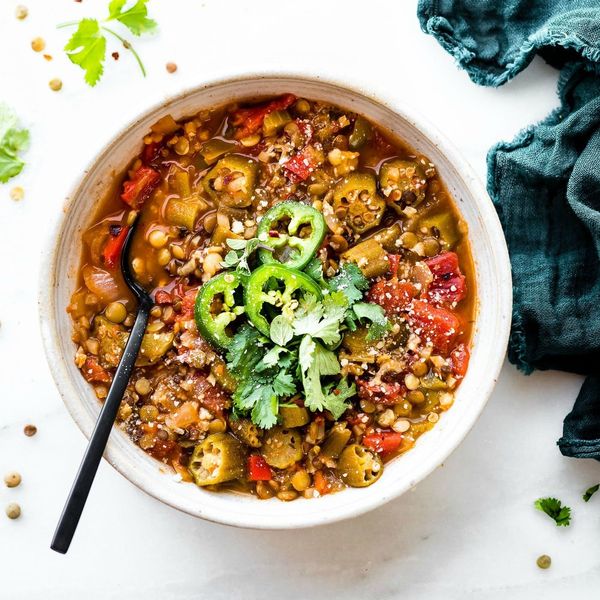 The Instant Pot is one of the best devices for cooking vegan staples like beans and lentils. There's no pre-soaking required, and the pulses pressure-cook in roughly 30 minutes, as opposed to one hour or more on the stovetop. From silky soups to lentil curries, these 14 meals will make you more than happy to dedicate some counter space to this gadget.

Vegan Curried Lentil Cauliflower Soup: Cauliflower and potatoes make this soup taste creamy even without dairy. Lentils give it texture and protein, while a blend of spices and a splash of lemon juice keep the flavors vibrant. (via Vegetarian Gastronomy)
Vegan Instant Pot Wild Rice Stuffing: Stuffing is usually served as a side, but this recipe is satisfying enough to act as a meatless entrée. The Instant Pot makes quick work of the wild rice, which usually takes forever to cook on the stovetop. (via Show Me The Yummy)
Instant Pot Coconut Lentil Curry: One-pot lentil curry is an essential meal to master if you constantly find you're too crunched to cook dinner. Serve it with rice or some warmed pita bread if you don't have time to make a side dish. (via Well Plated)
Vegan Instant Pot Creamy Tuscan Pumpkin Soup: Thanks to coconut milk, pumpkin purée, and sweet potato, this soothing soup is as rich as can be. Top with toasted pepitas and rosemary if you're feeling fancy. (via Real Food Whole Life)
Vegan Instant Pot Quinoa Chili: Vegans needing a protein boost will feel recharged after eating a bowl of this quinoa, red bean, and black bean chili. (via Well Plated)
Vegan Instant Pot Persian Chickpea Stew: It's the spices that set this chickpea stew apart. Dried lime powder, turmeric, cumin, fennel, and harissa help every bite sing with flavor. (via Every Nook & Cranny)
Instant Pot Lentil Soup: Lentil soup is so much better when it doesn't come out of a can. The Instant Pot keeps the lentils from getting too mushy, and the inclusion of fresh veggies and herbs adds on layers of flavor. (via Delish Knowledge)
Vegan Instant Pot Pad Thai Stir Fry: Pad Thai in the Instant Pot takes less time to cook than you would have to wait for delivery, meaning it's definitely a recipe worth learning by heart. (via Hummusapien)
Vegan Instant Pot Butternut Squash Soup: Full of sweet, earthy flavors, this is the soup you'll crave on chilly winter days. (via Two Peas and Their Pod)
Instant Pot Lentil Gumbo: If a trip to New Orleans isn't in your near future, this 10-minute lentil gumbo should tide you over. Don't skip the okra — it loses its "slime" as it cooks, and helps thicken the broth. (via Cotter Crunch)
Rutabaga Gratin: Cook rutabaga in the Instant Pot until it's soft, then turn it into a vegan gratin that's baked in the oven until crispy on top. (via Full of Plants)
Vegan Instant Pot Sweet Potato Peanut Stew Freezer Meal: Vegan cooking doesn't have to be complicated. Prep a few bags of this soup mixture ahead of time and place in your freezer. Then put the contents in your Instant Pot on a busy night and have a hearty stew ready for dinner in under an hour. (via Pinch of Yum)
Instant Pot Twice Baked Sweet Potato Casserole: Save time by cooking your sweet potatoes in the pressure cooker, then cut them in half and fill with a creamy vegan yogurt mixture topped with pecan streusel. (via Sweet Peas and Saffron)
Instant Pot Pumpkin Walnut Chili: Instead of just beans, this vegan chili is filled with all sorts of good-for-you ingredients, including nuts, grains and, of course, pumpkin. All become tender, saucy, and infused with flavor in the pressure cooker. (via Pinch of Yum)

Find even more tasty ways to use your pressure cooker by following us on Pinterest.

From Your Site Articles
Related Articles Around the Web
Justina Huddleston
Justina Huddleston is a food writer living in Los Angeles. When she's not busy writing, she spends her time in the kitchen creating both virtuous and decidedly junky vegan food. Buffalo chickpea pizza, anyone? She's also been known to eat a plain block of tofu or beans straight out of the can for lunch, but somehow those culinary adventures don't make it to her Instagram. You can follow Justina on Twitter or see what's cooking in her kitchen on her blog, A Life of Little Pleasures.
Recipe Roundup
Food
Hit Refresh Instant Pot Recipes One Pot Meals Recipe Roundup Vegan Recipes
The Conversation (1)

The Squash Soup was the absolute best! So happy I tried it!