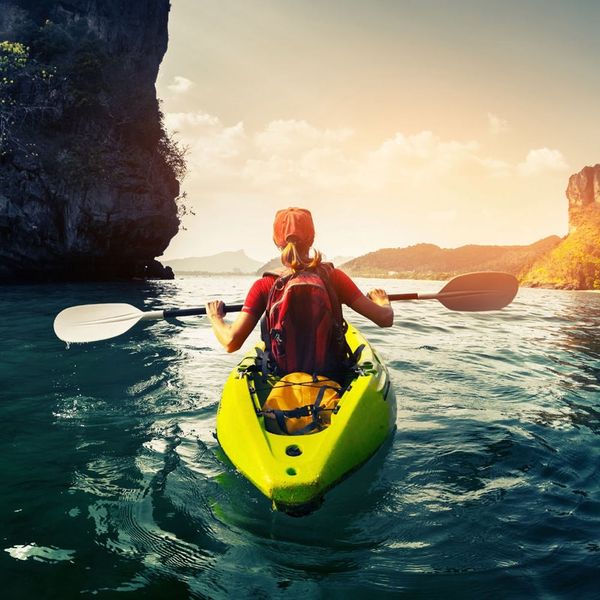 From getting a tattoo on vacation or planning a volunteer trip to the right way to bargain while traveling, a true wanderlust warrior knows tons of tricks of the trade. Heck, they probably have a pre-packed suitcase somewhere in their closet just in case they hear the words “spontaneous road trip.” But sometimes, no matter how much you’d like to drop everything and take off on an airplane, real life just doesn’t cooperate. If you can’t travel to far away places right now, you can still get your globetrotting fix by living vicariously through these 12 YouTube vloggers and travel junkies — at least until you plan your next great adventure.

1. Fun for Louis: When Louis isn’t gallivanting through Borgarfjörður, Iceland, he’s racing a rickshaw through India — and living the adventure, of course. A must-subscribe for epic adventures and amazing videos, it’s no wonder why this popular YouTuber has over 1.5 million subscribers. (via @FunForLouis)

2. Captain and Clark: Whether you’re looking for high-quality destination videos or cheeky down-to-earth style, this channel featuring the dynamic duo Captain and Clark has it all, including a series called alcoHAUL where they test out regional liquors, like Korean Soju and Hawaiian Koloa Rum. (via @CaptainAndClark)

3. Sonia’s Travels: The queen of travel tips herself also dabbles in her fair share of vlogs — like this beachy day-in-the-life travelogue in beautiful Rio de Janeiro. Follow her for insightful tips, bucket list inspiration and #realgirl travel charm. (via @soniastravels)

4. Hey Nadine: Putting out new videos twice a week, Nadine Skyora has visited over 45 countries in the last five years, all of which she faithfully shares with her wonderful subscribers. If you like candid adventures, amazing sights and hilarious mishaps, this just might be the travel channel for you. (via @nayders07)

5. Vega Brothers: From big cities to remote villages, the Vega Brothers aim to seek out local culture from the people who know it best: the residents. Whether they’re participating in the York Viking Festival or sleeping in a Canadian ice hotel, they prove that there’s always something to explore — and to add to your travel bucket list. (via @vegabrothers)

6. High on Life: Have you always dreamed of packing up, renting a camper and setting off on a great American road trip? Well, the group of friends behind this popular YouTube channel have, and their vlog series documenting their experiences is a definite must-watch for anyone who wants to know a little bit more about their own backyard. (via @sundayfundayz)

7. Hopscotch the Globe: In 2015 alone, Kristen Sarah visited France, LA, Germany, Trinidad, Tobago, Belize, England, Brazil, Ontario, Alberta, British Columbia, Curacao, Jamaica and Panama. And with 2016 already off to an adventurous start, we can’t wait to see where this vlogger takes us this year. (via @hopscotchtheglobe)

8. Travel Yourself: If you’re looking for short vids (AKA mid-workday pick-me-ups) of beautiful places and touristy locales, check out Cailin O’Neil’s vlogs. Not only do they showcase some of the most beautiful places in the world, but because they’re bite-sized, you’ll be able to hit the next button over and over again before your lunch break is up. (via @travelyourself)

9. Graham Hughes: Graham Hughes has a pretty impressive travel resume. Not only has the British filmmaker and adventurer won his own private Caribbean island, but he’s the first person in the world to visit 201 countries without flying. Yeah, you’re probably going to want to call in sick today to watch them all. (via @thatgingerscouser)

10. World of Wanderlust: Brooke Saward started her vlogs as a way to communicate with her friends and family while traveling so she wouldn’t have to repeat her stories over and over again. Now, with five million visitors to her blog each year and nearly 30,000 subscribers, her travel videos have gone much further than her family living room — and we travel junkies couldn’t be more thankful. (via @brookehaute)

11. Mr. Ben Brown: A recurring travel companion of Fun for Louis, 28-year-old Ben Brown is a photographer and visual artist first, which makes his travel vlogs absolutely breathtaking to behold. Seriously, go check out his Visual Vibes series. You won’t be disappointed. (via @benbrown100)

12. Pause the Moment: Travel tips, gear reviews and hit-the-road vlogs, Ryan Gargiulo wants to encourage every single viewer to take a leap to pursue their dreams — whether that’s writing a novel, going to university or traveling the globe. From hard-core adventure to day-in-the-life big city journals, PTM has everything you need to kick your wanderlust into overdrive. (via @pausethemoment)

Ashley Macey
Ashley Macey is a lifestyle freelance writer who loves all things fitness, wellness, and creativity. When she's not exploring her home in the Pacific Northwest with her dog Max, you'll probably find her curled up with a good book and some hot tea. Follow her daily jaunts on Twitter.
Posts that contain video
Home News
Posts that contain video YouTube
More From Home News