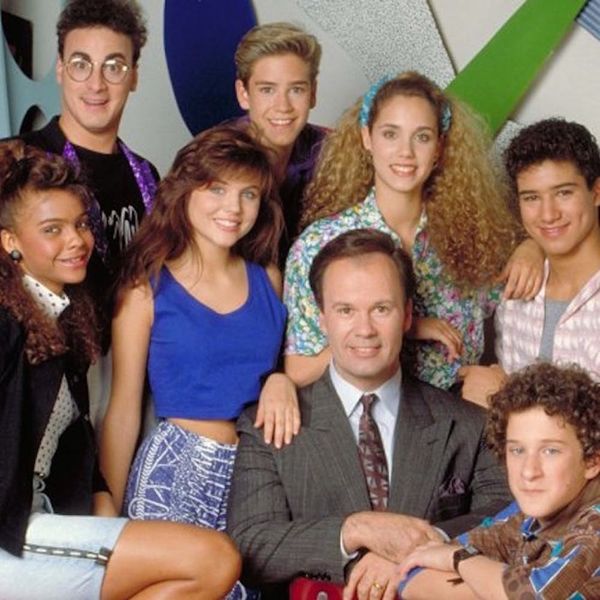 If you grew up in the ‘90s, there’s a prettttyyy good chance that Saved by the Bell was a regular part of your Saturday morning routine. Screw cartoons — it was the rebel-rousing Zack Morris, AC Slater, Screech, Kelly Kapowski, Jessie Spano and Lisa Turtle you wanted to hang with. The group’s main hangout, The Max, was featured so often it practically became a character itself, and now, its doors are finally open to the public — well, sort of. Saved by the Max, a pop-up diner in Chicago along the lines of NYC’s Central Perk pop-up, has recreated the iconic Saved by the Bell resto, and the world got its first glimpse inside in early June.

It may not be the actual set the crew constantly hung at back in their heyday, but boy, does it come close! The brainchild of Derek Berry, Zack Eastman and Steve Harris, the resto has garnered national attention from both the media (even Vogue wanted a piece of this) to actual cast members from the show (the real Max, Ed Alonzo, was on hand for opening day, and Patrick Thomas O’Brien, AKA Mr. Dewey, is set to make an appearance next).

We simply HAD to check out what all the fuss was about, so we visited the hopping spot to help you relive the magic — ’cause magic, it is indeed.

While the restaurant remains largely true to form, there are a few differences that stand out due to the structural setup of the building. Namely, the door — rather than bursting onto the set from the restaurant’s back entrance above the stairs, you’ll enter The Max through a side door that has cleverly been transformed into the school’s hallway. Complete with red student lockers that you can actually climb inside, Screech style (albeit hopefully voluntarily!), the standout here is Jessie Spano’s locker, which has been decorated with cast photos, stickers and the like.

Once you round the corner, however, you. Are. IN. The space is on the smaller side — roughly the same size as The Max, TBH — but it’s not overly crowded. You can slide into a red and blue center booth just like AC Slater, take a table atop those iconic stairs, or hop up onto a red retro counter stool at the bar. The other main difference between the show and the IRL Max? The addition of a few more, *ahem,* “grown up” amenities. Zack, Kelly and the gang were just in high school when their hangout reigned supreme, so it was all floats and (Lisa) turtles instead of the Manhattans and mimosa concoctions you’re likely to find here.

But don’t worry — they’ve got those same non-alcoholic treats too! We tried a Mr. Tuttle’s Float (you might recall the gang’s driving instructor), and we definitely weren’t disappointed!

Nearly all of the menu’s items are named similarly. From the “AC Sliders” to the “Mac & Screech,” every cast member has a dish or a drink in their honor.

It’s the little, subtle details like this that make the ambience believable, aside from the overall enthusiasm for the place.

Jams from NKOTB set the mood (“Step by step, oooo baby!”), and, oh yeah — that KKTY Bayside radio station the kids once used to save their beloved Max from being turned into a parking lot? It’s there too, set up as a DJ booth that comes alive after dark (a Zack Attack cover band also plays on Sunday nights).

While the tabletop jukeboxes from the show have been replaced with a single, giant decorative version, the payphone near the door reads “1-900-CRUSHED” from Zack’s advice line days. The bathroom is “signed” by characters from the show, and the show’s original executive producer and writer, Peter Engel, actually sent the new Max a menu from the original Max, now proudly displayed near the host area.

All of these things combined make it so that, from a certain angle behind the bar (decorated to look like Mr. Belding’s office), it really IS possible to turn around and feel like you’ve actually done it — you’ve gone ahead and time traveled, and into a fictional place, no less. Pinch yourself and it’ll hurt — you’re really AT THE MAX.

Though the resto is currently sold out through its entire scheduled three-month run, you can try your luck at a walk-up spot if you’re willing to wait — but be warned, the line is something fierce!

Now. Who wants to take on recreating The Bronze?

Would you travel to check out Saved by the Max? Let us know over @BritandCo!

Nicole Briese
Nicole is the weekend editor for Brit + Co who loves bringing you all the latest buzz. When she's not busy typing away into the wee hours, you can usually find her canoodling with her fur babies, rooting around in a bookstore, or rocking out at a concert of some sort (Guns N' Roses forever!). Check out all her latest musings and past work at nicolebjean.com.
90s
Pop Culture
90s Nostalgia
More From Pop Culture