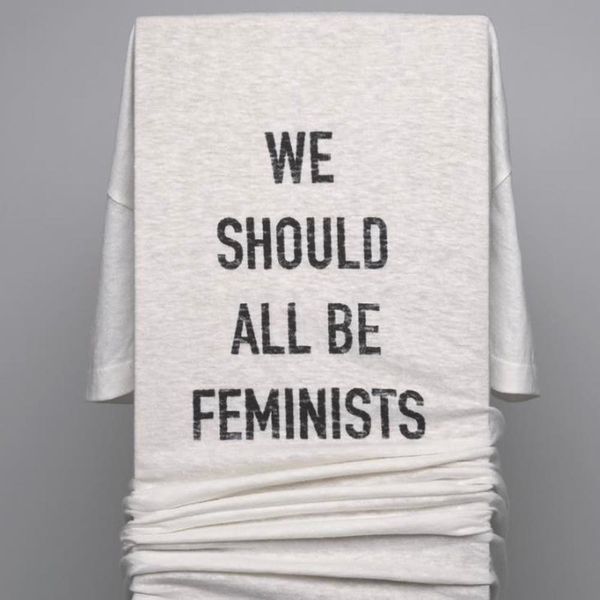 For her debut collection at Dior, Maria Grazia Chiuri made quite the feminist statement. Dior’s first female artistic director sent a t-shirt that read, “We Should All Be Feminists,” down the Spring 2017 runway (while Beyoncé’s “***Flawless” featuring Chimamanda Ngozi Adichie’s TEDx talk about feminism played in the background, we should mention). In short, it was a capital-M “Moment.”

We knew the tee was going to be a hot item, especially after it was announced that Dior would donate a percentage of proceeds from the sale of each to The Clara Lionel Foundation. And, hey, the non-profit that supports global education, health, and emergency response programs counts Rihanna as its spokesperson.

The tops are available today through May 15 in Dior stores and online, as well as at Saks.com, where you can choose between the standard issue white T-shirt or a limited-edition black version. But, here’s the thing: Either version will set you back $710.

So, while the shirts benefit a good cause, we think that’s a lot of dough just to show off our feminism in a designer shirt and be able to pay the rent on time. Below are four options that won’t cost nearly as much, including a very close version from Etsy, but will still get the message across.

1. Feminist Apparel Feminism T-Shirt ($30): Maybe after seeing the definition laid out so plainly on your t-shirt, everyone you encounter will actually become a feminist.

2. Otherwild The Future Is Female T-Shirt ($30): The good thing about this t-shirt is it isn’t nearly as expensive as the Dior option but still will donate 25 percent of proceeds to Planned Parenthood.

3. Wildfang Wild Feminist T-Shirt ($40): Make it clear your voice will be heard or, at the very least, your t-shirt will be seen.

4. Etsy We Should All Be Feminists T-Shirt ($15): Leave it to Etsy to come through with an almost-exact version of the shirt, at a fraction of the cost and in several different colors.

Which t-shirt do you have your eye on? Tweet us @BritandCo!