What Aziz Ansari + Other Comedians Can Teach You About Love 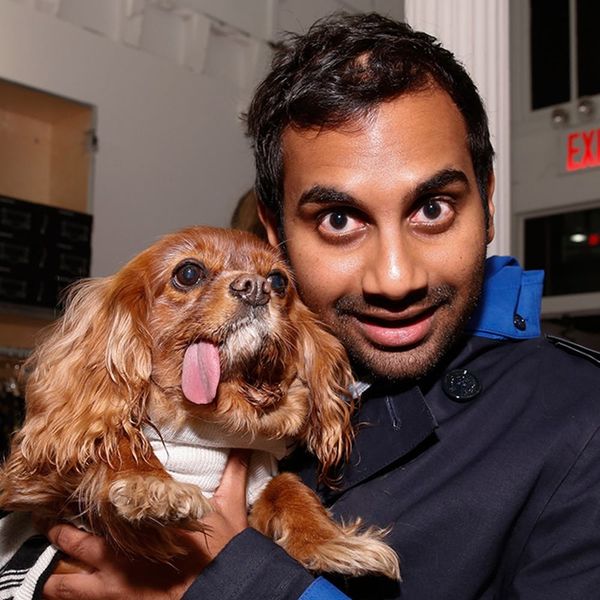 Most of you recognize comedy bad boy Aziz Ansari from Parks and Recreation, where he played entrepreneur and “treat-yo-self” advocate Tom Haverford. What you might not have known until this past week is that he actually has a lot of good advice about relationships. His new book Modern Romance comes out this week, and his comedy special of the same name can be found on Netflix. You may not think comedians have a lot to offer in the love advice category, but look at Aziz himself: he’s dating a super hot chef who worked at Momofuku. A beautiful, successful woman who can make cookies? That’s a catch no matter how you slice it (and please don’t slice women at all). But Ansari isn’t alone when it comes to offering guidance for the modern dater and the following are tips and tricks you can steal from some of the best stand ups. As always, a two drink minimum is encouraged.

1. Aziz Ansari — Go where the dates are: Though most of Ansari’s book/special is about the perils of texting while dating, he also has great advice on where to go to find true love. In an excerpt he shared with Glamour, Ansari recalls that he used to look for partners in all the wrong places. “I had been staying out like a lunatic and complaining that I only met lunatics,” he says. Finally he “began doing things that I’d want theoretical girl friends to be into.” This lead him to more museums and food events where he eventually met his current partner. (Photo via JP Yim/Getty)

2. Garfunkel and Oates — Don’t do the “Fadeaway”: Comedy music duo Garfunkel and Oates have been singing the true true for a long time when it comes to relationships. Their songs discuss everything from apartment cleanliness post-breakup to the complexities of the ol’ HJ, but by far their best piece of advice involves the Fadeaway. The Fadeaway is when you’ve been on a few dates and you just aren’t clicking but instead of breaking up cleanly you “pretend to suspend it… saying I’m busy all week… withdraw from you by being oblique.” As G+ O put it, “the way men break up may be sloppy and terse/what they do is bad and what we do is worse,” and that people often pretend the Fadeaway is actually the nicer option. Fight the fade; be direct when communicating with your date and save everyone a headache. (Photo via YouTube)

3. John Mulaney — Find someone who advocates for you: John Mulaney describes having a girlfriend “like having a lawyer in real life.” This is not to say that his wife Annamarie Tendler Mulaney is his legal counsel (she’s actually a beauty expert with a super cute Instagram) — it just means she looks out for him. “Before I had a girlfriend I had no standard for how I should be treated. You could do anything to me,” he says. “I was like a young Motown singer.” He goes on to say that she urges him to speak up in social situations when things aren’t going his way (aka late food at a restaurant, unfair treatment on airlines). Always pick a partner who will be your number one teammate, someone with your best interests at heart. (Photo via @johnmulaney)

4. Aisha Tyler — Don’t lie. Ever. Aisha Tyler is a stand up known for being fashionable, sharp and essential to the nerd community (that’s her voicing Lana on Archer). In a Glamour article from 2013, she says that in this day of wall-to-wall tech, lying is completely impossible. “Often the lie is worse than the crime,” she says. “So long as you’re not intentionally hurting anyone, your stumbles will make you seem human.” Think about that next time you feel the need to pretend that you absolutely have seen your date’s favorite movie or that of course you don’t still talk to your ex. Instead, be direct and willing to learn. (Photo via Mark Davis/Getty)

5. Jim Gaffigan — Find someone who makes you better: The comedy world is full of great husband and wife teams (Mavis/Jay Leno, Stiller/Meara to name a few) but one of the best ones working today is Jeannie and Jim Gaffigan. Jeannie has produced every one of Jim’s comedy specials since he started and is often credited as a co-writer on his albums. She can be seen with him on every tour along with their five kids (who she also technically co-produced). Find someone doing what they love and find out what your place is within that love. Chances are they’ll support your dreams right back. If you’re lucky, you’ll be an unstoppable team. (Photo via Paul Zimmerman/Getty)

Got a funny love tip? Share it in the comments!

Molly Sanchez
Molly Sanchez is a writer, comedian and lover of burritos everywhere. She has written for The Bold Italic, Liquid Bread, Thrillist and HelloGiggles. She devotes her time to Bloody Mary research, exploring San Francisco and promoting wide spread shower beer awareness and appreciation. Find her on Twitter @seriousmolly trying to get famous people to laugh at her jokes or on Instagram @mollyfuckingsanchez where she swears a lot.
Dating
Home News
Dating