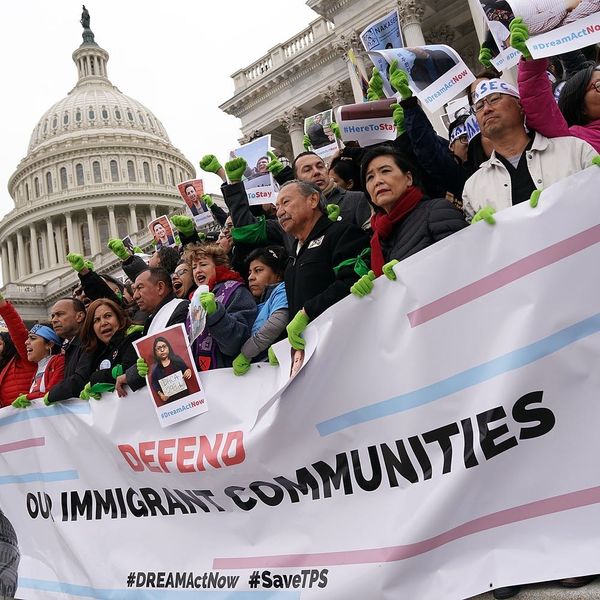 Donald Trump gave his first State of the Union address on Tuesday evening, delivering a speech that pleased his base, but was just more cause for concern among the president’s detractors. While President Trump’s speech addressed nuclear threats (which he said may “magically” be solved someday) and the economy, a great proportion of the address was dedicated to his highly controversial plans for immigration reform.

In his speech, Trump spoke repeatedly of MS-13, a deadly gang with origins in Los Angeles dating to the 1980s and 1990s. The gang was founded by Salvadoran, Guatemalan, and Honduran refugees who fled their home countries for the United States in the midst of civil wars that were supported by the US government. When a large number of Central Americans were deported from the US in the late 1990s, many young deportees found themselves alienated in a culture they had not grown up in and with limited economic prospects. This cocktail effect allowed the MS-13 gang to flourish.

There’s no denying that MS-13 is dangerous: Stateside, the gang has been responsible for various violent crimes from murder to human trafficking, often involving minors who are also of Central American descent. But the gang’s reign of terror is far stronger in Central America; in El Salvador, alarmingly high rates of gang violence have been designated a national security issue. According to InSight Crime, a think tank that researches organized crime in the Americas, there may be as many as 70,000 gang members living in the Northern Triangle of El Salvador, Guatemala, and Honduras.

Trump specifically referred to the 2016 murder of two young teenagers by MS-13 members in Long Island, New York in Tuesday’s address. “Many of these gang members took advantage of glaring loopholes in our laws to enter the country as illegal, unaccompanied alien minors,” he claimed. These murders are, of course, unspeakably tragic, but Trump was clearly attempting to equate people who have committed murders with the general undocumented immigrant population, a maneuver whose effect is to demonize immigrants and stoke racially charged fears.

Trump’s SOTU remarks linking gang violence with migrants have been broadly called out by experts for being inaccurate. For many Americans of Central American descent, these statements were frustrating and hurtful.

“As a Salvadoran-American, the most hurtful thing about President Trump’s State of the Union speech was when he conflated MS-13 with what he called unaccompanied ‘alien’ minors,” Daniel Alvarenga, a Salvadoran-American and journalist for AJ+, tells Brit + Co. On the contrary, Alvarenga argues that unaccompanied children who flee El Salvador are actually refugees who are in fact “fleeing assault and recruitment by MS-13.”

When the president announced plans earlier this month to rescind the TPS protections of over 250,000 Salvadoran immigrants living legally in the US following the country’s devastating 2001 earthquake, the decision to send long-term US residents back to a dangerously violent homeland was widely viewed as a blow to humanitarian immigration in the US. Ex-gang members in El Salvador told CNN that they worry this decision will only make MS-13 violence worse.

“If [Trump] really cared about stopping MS-13,” says Alvarenga, “he’d make sure those kids stayed reunited with their families.”

Despite the facts about undocumented immigrants and criminal activity, the Trump administration continues to equate immigration with violent criminality, eschewing the serious human rights violations committed by the government against immigrants, including detaining them in inhumane conditions, tearing families apart, and stalking by ICE agents, making it impossible for some immigrants to even leave their homes.

In his speech, Trump also reiterated his desire to build a border wall separating the US from Mexico. Following a brief government shutdown this month, Trump said he was willing to support a pathway to citizenship for 1.8 million undocumented immigrants who arrived in the US as children, in exchange for $18 billion in funding (among other requests) for a border wall. Experts argue that a border wall would do nothing to improve the security of the US-Mexico border, and would only worsen conditions for Mexicans and Americans who live near the border.

What did you think of Trump’s first State of the Union speech? Tell us on Twitter @BritandCo.