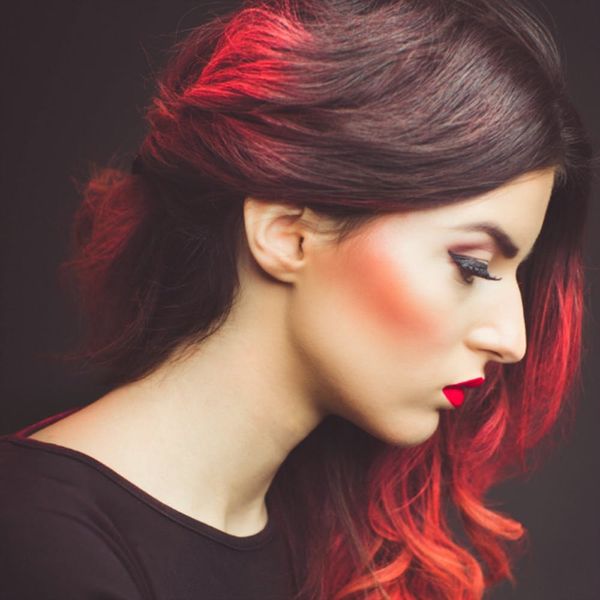 Before ombre was a hairstyle, it was just an adjective describing anything, commonly a fabric, where the color faded gradually from shades of dark to light. Ombre hair, said to have started as a French trend, starts out darkest at the roots, gradually fades lighter, and culminates in the lightest hue at the ends. The best applications reveal seemingly no transition from mid-hair to ends. Natural looking hair colors will fade dark to light. On the opposite end of the spectrum (hah), hair dyed pastel colors can start out light at the roots and fade into color mid-hair, culminating in the deepest color saturation at the ends.

Ombre is achieved with a technique known as balayage — in french, “to sweep” — where the colorist sweeps on dye with the tip of a brush, often using powder dyes for precision. In this case the lighter color is directed more on face-framing sections of hair, giving a sun-kissed look. More natural, subtle applications of ombre are referred to as sombre.

The balayage technique may also be used to create a tortoiseshell effect, using shades of browns, golds, and caramels. This is called ecaille.

Have you gone ombre? C’mon show us your hair-selfie! Tag us on Instagram @britandco. Come on — you know you want to!

Sally Jones
Sally Jones is a writer and editor living in New York City. She has worked at many websites including iVillage, Ladies Home Journal, More, Parenting, Cosmopolitan, The Knot and YourTango, in jobs ranging from editor to COO. Renovation and interior design are her unhealthy obsessions hobbies. She has renovated every home she's lived in, including the rentals, and like... whoa, who does that? You can catch her at her blog Renov8or.
hair dye
Hair
hair dye Ombre