What My Teen Obsession With John Mayer Was REALLY About 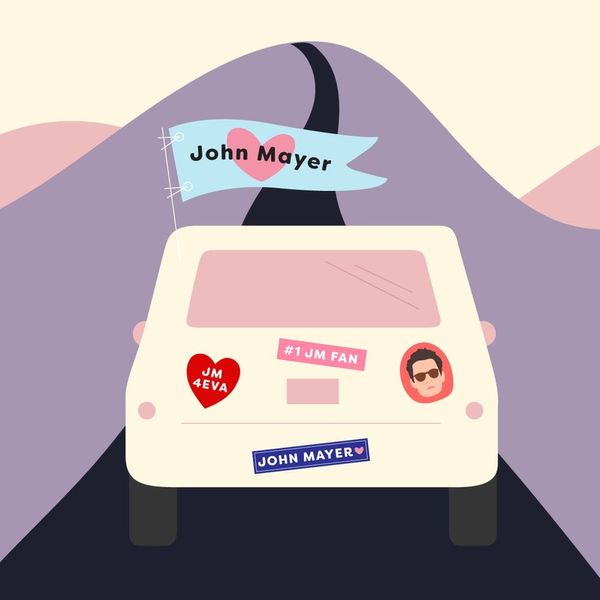 I was a fan of John Mayer long before he was famous. I know everyone says that about their favorite musician, but in this case, it’s true. I first saw him with my best friend Jessica in the gymnasium of Roanoke College for $7, his first name misspelled as “Jon” on the ticket. I was 16 years old, and his first album, Room for Squares, had been on heavy rotation in my CD player for weeks. My locker was covered in pictures of him I’d printed off the internet, and when I wore my concert tee to school the next day, my friends asked me if John Mayer was some new fashion designer. “Are you serious?” I’d asked them, feeling smug in the secret I’d discovered of this man and the power of his music.

My anthem in high school was “Comfortable,” a song about a couple who had broken up and sung from the perspective of the man still pining for the comfort and ease of the lost relationship. I played it over and over again, hearing something new to latch onto each time. That song touched me in a way none had before. I couldn’t remember ever experiencing such beauty, and it was then that I found someone who could put words to all the feelings I had, but could never articulate. The guitar in “Comfortable” is slow, and you can hear the intention behind each chord; you can hear the pain. That pain resonated with me then — that feeling of longing, of devastating loss.

When I turned 16, I got a 1988 Pontiac Grand Am, and although the doors were heavy like lead and the muffler was loud, it was mine. On the really bad days, I’d sit in the driver’s seat during lunch with that album playing, and I felt safe in a way that was alien to me up until then. After school, I drove for hours around my small town, singing along as I drifted past familiar landmarks and up winding roads. I didn’t feel that same safety at home, with my abusive father, or at school, with my equally abusive boyfriend. John Mayer would never tell me I’m worthless, I thought, as my father’s office grew smaller in my rearview. John Mayer would never hit me, I told myself as I drove past my boyfriend’s house and the quiet wail of “Man on the Side” slipped through my speakers. That now infamous line, “I’ll never let your head hit the bed without my hand behind it,” took on new meaning when my boyfriend drunkenly shoved my face against his bedpost one night my senior year of high school. I wanted to be somebody’s wonderland, but instead I felt tossed aside like an old toy, a girl who would never have her own John Mayer in real life.

I was prone to obsessions and fantasies back then, as many teenage girls are. I imagined John sweeping into my life and carrying me off to his world of soft melodies and shared heartbreak. I fantasized about what a relationship with him would be like, how gentle and careful he would be. Jessica and I threw ourselves into everything he did, driving hours through the night to stand in line and wait for ages to be front row. We made concert friends that we posed for pictures with using disposable cameras and shared stories of our mutual love for the man with the guitar. We sang “Your Body Is a Wonderland” outside his trailer on a warm North Carolina night until he emerged and signed our tee shirts, our bare skin. We felt high for days after that.

Even writing this now, half a lifetime removed, I can’t help but smile at the pure elation I felt when John stepped out of that trailer, his face bemused as he called, “What the hell are you guys doing out here?” Of course, now I realize just how young I really was, how wrapped up in this dream of a 24-year-old singer saving me from my suburban life with my suburban teenage problems that were too big even for good music and an autograph from my idol to solve.

But my problems didn’t exist when I was at concerts. Jessica and I would contemplate our show outfits for hours and make pacts never to settle for less than third row. We plotted ways to meet him, and even taped over some family home movies to send in a contest entry to VH1 on a VHS tape. Each new album spun on repeat during the long drives to Knoxville or Virginia Beach as we prayed he would play our favorite songs during his set. Jess and I had known each other since we were three years old, but nothing bonded us like traveling to those concerts. John Mayer was more than just a celebrity crush for us — he was an escape from the dysfunction of our lives at home, a man we could trust, if only in our imaginations.

One night, at a show in Raleigh-Durham, Jessica and I stood second row in matching halter tops and watched John strum and sing in a red paisley button-up, the fluorescent lights hot on his face. During an interlude of “My Stupid Mouth,” he looked directly at me from the stage. Our eyes met, and I snapped a picture to capture this glorious moment for the rest of time. It’s silly to think of now, of course — I was just another face in the crowd, a silly teenager with stars in her eyes. But back then, it was everything. His gaze was intense and sultry, his lips full and pouty. He was beautiful. I felt like we connected; I finally felt seen.

I still have that photo in an album in the new house I share with my husband. My obsession with John Mayer has obviously waned, only in part because I realized he wasn’t the prince I had made him out to be. He’s human, like me, and has his own demons. He couldn’t save me from my life back then, no matter how many miles I drove to see him or how long I dreamed up ways to make him fall in love with me. But his music was the soundtrack to some of the toughest times in my life, and my fantasies were a necessary distraction from the pain I was too young to handle on my own.

John Mayer also brought me even closer to my childhood best friend, who now lives a 15-minute drive away from me. We still reminisce about those times in high school when I missed my AP History exam because I overslept after a long night of driving home from a concert in Charlotte, or how our new college friends came to a show with us freshman year of college and were completely unprepared for our level of super-fandom. He’s on tour right now, and it feels a little weird that Jess and I aren’t going to see him. 16-year-old me would be so disappointed.

Even though he doesn’t mean the same thing to me as he did back then, John Mayer will always occupy a special space in my heart. He was the first man I loved who didn’t hurt or betray me, and his songs gave me hope that maybe something better was waiting for me on the other side of all that heartbreak. And now, more than a decade later, I know that there was.

Brittany Kerfoot is a writer/editor living in Washington, DC with her husband and their six rescue pets. In addition to writing, she is also an adjunct English professor at George Mason University. You can view her full publication history on her website at www.brittanykerfoot.com.

Do you have a story you’d like to tell? Pitch us at pitch@brit.co