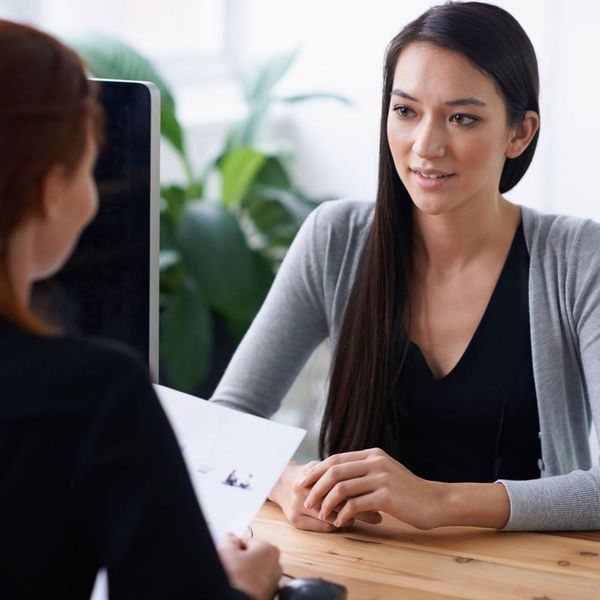 Attention all #girlbosses: It’s time for us to stand up and get what we deserve. That’s right, we’re talking about increasing your salary. Even if you just slayed your first business trip, sitting down face-to-face with your supervisor and asking for a pay raise can be stressful… and awkward. Which is why we called in a pro to help us avoid flubbing our request for more pay. Kim Wensel, owner of Pattern of Purpose and a career coach for millennials, breaks down the six things you should absolutely NOT do when asking for a salary bump.

1. Don’t make it personal. As much as you think this request is all about you — your performance, your work ethic and your commitment to the company — it’s not. Kim suggests making it about the company instead. “Frame your ask in a way that shows your employer how you’re helping them do better business, reach their goals, make more money and run a more efficient system. This will encourage them to see you as an asset worth investing in,” she explains.

2. Don’t ask before you’ve worked there for a year. You might join a team and totally rock it from day one, but that doesn’t necessarily mean you deserve a raise right away. Kim notes that it typically takes six months to learn the role and another six months to show your contributions. She adds that you should “use this time to build your proof [that you deserve a raise], and you’ll be armed to go in with a good case on your one-year anniversary.”

3. Don’t base your ask on how long you’ve been with the company. Length of employment doesn’t automatically equal more money. “Often I see employees asking for a raise simply because they’ve been there for X amount of years,” Kim advises. “You don’t deserve a raise for keeping a seat warm; you deserve it because of your accomplishments.”

4. Don’t bring up a colleague’s name and salary as a comparison. Kim mentions that of course it’s fine to base your ask on industry averages, but bringing in another employee’s personal information is a no-no. “You don’t know the full reasons behind why someone else is getting paid what they are,” she says. “Bringing up this information also can make it look like you’re complaining or making the assumption that everyone at the same level deserves to be paid the same, which just isn’t true.”

5. Don’t forget to show proof. While we’re 100 percent confident that you’re rocking your nine-to-fives like the #girlboss that you are, your manager might not take notice of the things you get done on the daily. To make sure you’re loaded with the proof that you deserve more moolah, Kim suggests that you “bring examples of your value to the table. This could include emails of praise for your role on a project, as well as tangible products you played a part in creating. By showing the output of your work, you can build a much stronger case for your value.”

6. Don’t ask for a raise without stating a number. “It can be totally intimidating to put a number behind your ask, but without it, you risk your employer not matching your expectations. State your desired salary confidently,” Kim suggests. “There is so much power in being transparent and guiding your employer to the dollar amount you think you’re worth. Assume they will say yes and not no, and you’ll feel much more confident with the ask.”

Have you successfully negotiated a raise? Tweet us how you made it happen @BritandCo!

Mastering the 4 Cs for a Winning Marketing Strategy