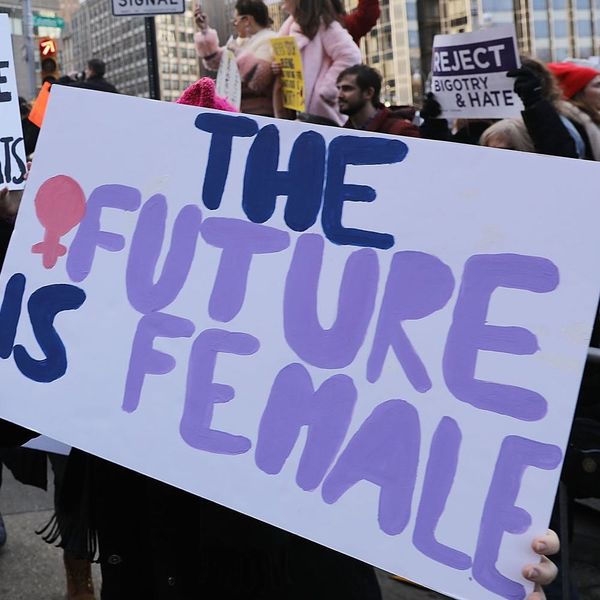 Harvey Weinstein. Louis CK. Matt Lauer. They’re only a few names on a long list of men facing sexual harassment charges — a list that’s been growing steadily for months. Last October, The New York Times published an investigative story alleging that Weinstein had been harassing Hollywood stars for decades. And most recently, Larry Nassar was convicted and sentenced to 40 to 175 years in prison for criminal sexual misconduct.

In the meantime, a slew of organizations, companies, and governments have seen scores of women (and men) come out of the woodwork with their own allegations. It’s clear that there’s a large-scale phenomenon emerging, but it’s not yet clear what it will mean for women in society and the workforce going forward. We reached out to four experts for their take on the potential outcomes of the #MeToo movement.

“The current outpouring of sexual assault allegations has had deep and meaningful implications for women in general and survivors in particular. It has shown the epidemic that exists when it comes to assault of women by men, and it has also given survivors an opportunity to find their voice, to come out of the shadows and talk about the pain they have suffered. In hearing these stories, we are all bearing witness to the pain and also we are forced to acknowledge an important truth, namely the power that men still have and exert over women. This power is political, personal, and sexual.”

The Women’s March is a powerful example of women coming together to share their stories, and is especially poignant in light of the growing #MeToo movement. Celebrities such as Alyssa Milano used the march as a platform to voice their support for sexual assault survivors, and encouraged women to continue the momentum.

“The men who are reconsidering how they treat women are not examining their conscience. Guys who sexually harass women are missing a crucial component in character organization that allows them to imagine the impact of their own behavior on others. This empathic requirement involves conscience, and it’s not present in the sexual abuser. A number of my female patients have reported to me that their entertainment industry bosses have ceased to stand ‘too close for comfort’ or ‘put their hands on me’ and ‘push me against a wall’ since the #MeToo movement. However, it is my belief that these men have ceased their inappropriate and unacceptable behaviors not because of conscience examination, but rather for fear of being found out and getting into trouble. Those folks who sit in power positions will now think twice before taking action. However, there are some who believe their power is greater than or smarter than the system. A true narcissist always shoots himself in the foot!”

Dr. Walfish’s argument is epitomized by the letter that Larry Nassar wrote to Judge Rosemarie Aquilina prior to hearing more than 100 victim impact statements in court. The letter, which Judge Aquilina called “mumbo jumbo,” claimed that Nassar was “concerned about [his] ability to face witnesses the next four days mentally,” and speaks volumes about the disgraced doctor’s ability to, as Dr. Walfish says, examine his conscience.

“Women who have been speaking out about sexual assault and harassment are helping women recognize just how powerful their voices are — especially when they come together. There may be isolated incidents of backlash that may occur, and some women may risk being blackballed in their industries, but this movement is empowering women not only to speak out, but also to be their own bosses and create their own websites. There is a power shift happening, and it remains to be seen if women will finally get the opportunities they deserve without having to compromise their integrity.”

The power shift that Boler mentioned was on center stage at this year’s Grammy awards. Many artists donned white roses in a nod to the Time’s Up movement, and some celebs even mentioned the culture shift in their speeches. Janelle Monae made this powerful statement prior to Kesha’s performance: “And to those who would dare try and silence us, we offer you two words: Time’s up. We say time’s up for pay inequality, time’s up for discrimination, time’s up for harassment of any kind, and time’s up for the abuse of power. Because you see, it’s not just going on in Hollywood. It’s not just going on in Washington. It’s right here in our industry as well,” she said.

“In general, I think this can have unintended consequences in the workplace. Many industries are still dominated by men — they make the hiring and other employment decisions. In order to avoid any accusations, they may start to slight women. This takes women back 30 years. Workplaces should be educated and engage in training to ensure that this doesn’t happen to women.”

Good to keep in mind.

What’s your take on what these women had to say? Let us know @BritandCo!

Gabrielle Gresge
Gabrielle Gresge is a Chicago native and journalism student at the University of Missouri. While not chasing deadlines, she enjoys giving campus tours, exploring her new home, and missing her old one. She loves to write about these experiences in her own handwriting at gabriellegresge.wordpress.com.
Feminism
Gender Issues
Feminism Womens Health