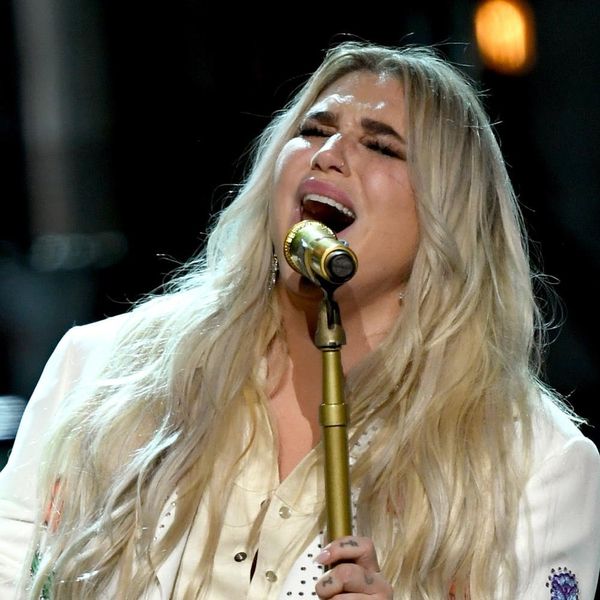 The 2018 Grammy Awards gave us some pretty stellar performances, but perhaps none as memorable as when Kesha took the stage to sing “Praying,” a poignant choice amid the current #TimesUp movement.

Kesha has been open about the fact that she used her music to heal after a seemingly endless legal battle with her now-ex-producer, Dr. Luke. Her Rainbows album takes you through the range of emotions she’s experienced in her struggle to find herself again after being lost for so long.

We knew her Grammys performance was going to be an emotional one, but we had no idea just how moving it would be.

Introduced by Janelle Monae, who made her own powerful statement about the Time’s Up movement, Kesha took the stage with an army of other women, all dressed in white. It was clear from the first note that she was there not just to wow the crowd, but also to deliver a powerful message about how far she’s come, how much she’s truly healed, and how ready she is to take back her life. As she belted out, “I’m proud of who I am / No more monsters, I can breathe again / And you said that I was done / Well, you were wrong and now the best is yet to come,” it was impossible not to feel a flood of emotions.

To show their support, stars including Camila Cabello, Julia Michaels, Cyndi Lauper, and Andra Day joined her on stage, with Lauper even putting her hand on Kesha’s shoulder as they sang together in a powerful chorus that gave everyone chills.

With the triumphant finish, Kesha broke down in tears as the other women surrounded her in an embrace.

Afterward, fans took to social media to express just how moved they were by the performance, and how grateful they felt to have witnessed it.

I hope #Kesha feels a little bit of her self back from that performance and our response to it. She was magnificent.#TimesUp #MeToo#GRAMMYs pic.twitter.com/Whn6W4cAzj

Kesha freakin killed it! I’m so proud of her, she has gone through a lot but she isn’t letting it stop her, it’s just making her stronger. She is my inspiration and I wanna be like her one day. Kesha deserves an award and just everything in the world. I love you Kesha❣️

For anyone out there suffering from depression and/or the horrible aftermath of rape / sexual assault :

One person pointed out that it may have been more meaningful than any of us will ever fully realize.

And they all feel less alone, and more powerful, because of her. #grammys #metoo #timesup

What did you think about Kesha’s 2018 Grammy performance? Let us know @BritandCo.

Desiree O
Desirée O is a ‘Professional Bohemian’ who loves anything and everything related to the arts, entertainment, and pop culture. She ADORES being a ‘Newsy’ for Brit + Co, covering all of the latest tidbits of awesomeness that you want to read about. When she’s not writing, she’s either making messy art, going on long adventurous walks with her camera, or poking around over at bohemianizm (http://www.bohemianizm.com/). You can find out about Desirée O and her work at http://DesireeO.com/ or follow her on Twitter @DesireeO.
Awards Shows
Music
Awards Shows Grammy Awards
More From Music