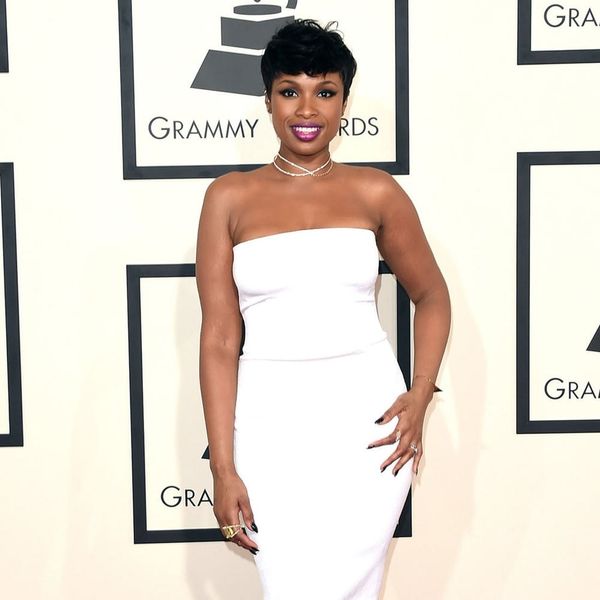 With red carpet season fully underway, one thing has become very clear: white is the color of the season. From Rosamund Pike’s cutout dress to Jennifer Hudson’s ’90s-esque mid-length Grammy gown, the shade has proven itself to look amazing on pretty much everyone. We’ve already wrapped up the Golden Globes and Grammy Awards, but the mother of all award shows (AKA the Oscars) aren’t for a couple more weeks. We’re guessing there will be some majorly chic white gowns sported there, but until then, here are our favorite white looks we’ve spotted so far. Whether you opt to use them as bridal inspiration or simply just as some star-studded eye candy is up to you.

1. Emily Blunt: Emily Blunt took to the Golden Globes looking like a Grecian goddess. Aside from that amazing dress, how about that braided hair? If you’re as into it as we are, check out our tutorial on the hairstyle. (photo via Jason Merritt/Getty)

2. Marion Cotillard: This huge dress could have easily gone very wrong, but leave it to the French star Marion Cotillard to make it look effortless. (photo via Alberto E. Rodriguez/Getty)

4. Kristen Wiig: This one’s for all you boho babes. Totally easy-going, but still super elegant, we’re trying really hard to wish this one into our closet. (photo via Frazer Harrison/Getty)

5. Danielle Haim: Oh, HAIM. How are you so cool? Teach us your ways. The middle sister, Danielle Haim, looked utterly stunning in this slim-cut suit. (image via Larry Busacca/Getty)

6. Jemima Kirke: Capes have been making periodic appearances all over the red carpet this season, but none have been quick as dramatic as Girls star Jemima Kirke’s silver number. (photo via Frazer Harrison/Getty)

8. Jennifer Hudson: Jennifer took it back to the ’90s in this white tube top dress, crystal choker and strappy heels. (photo via Jason Merritt/Getty)

11. Carolyn Malachi: A little looser than Danielle Haim’s suit, but not quite at an ’80s level, singer-songwriter Carolyn Malachi’s suit is the perfect in-between. (photo via Jason Merritt/Getty)

12. Renee Bargh: Offering up a more casual vibe, the Extra host donned a red carpet–ready look that would also allow her to get down to business. (photo via Frazer Harrison/Getty)

13. Jessica Chastain: Jessica Chastain’s crazy braid took the main stage for her look at this Critic’s Choice Awards, but we were also swooning over this Asain-inspired number. (photo via Alberto E. Rodriguez/Getty)

14. India.Arie: Leave it to India.Arie to totally bring a boho vibe to the Grammys. This voluminous, dramatic gown was flattering to say the least. (photo via Jason Merritt/Getty)

15. Anna Faris: While we’ll admit this is a little too ruffly for us, we’re still into both pieces on their own. (photo via Frazer Harrison/Getty)

18. Charlie XCX: We’re getting some Dumb and Dumber vibes from Charlie XCX’s white tuxedo, but we mean that in the best way possible. If anyone’s going to rock a pink bowtie and furry shawl it’s going to be her. (photo via Jason Merritt/Getty)

What was your favorite white look from the red carpet so far? Any predictions for the Oscars? Share your ideas in the comments below.

Cortney Clift
Cortney is the senior writer and special projects editor at Brit + Co. She typically covers topics related to women's issues, politics, and lifestyle. When she's not buried behind her computer you'll find her exploring New York City or planning her next big adventure.
Red Carpet
Party
Red Carpet