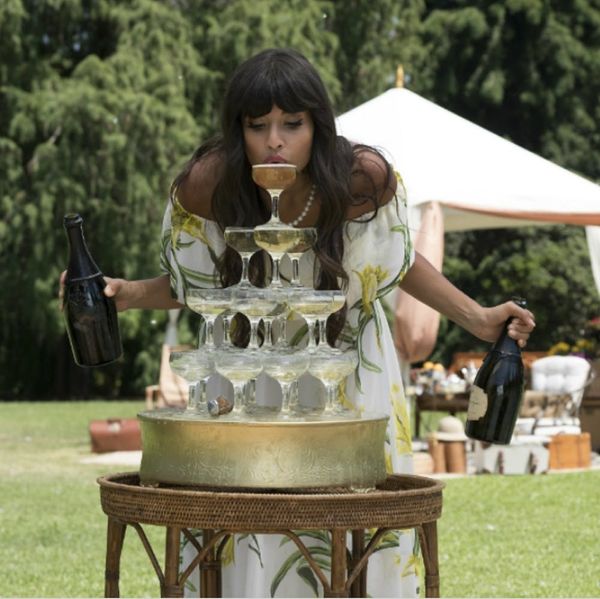 The Good Place star Jameela Jamil has gone off multiple times — both on Instagram and, more recently, for Glamour — about our obsession with the way women look. On both platforms, she calls out the constant stream of figure-focused posts hashtagged #fitspiration and #bodygoals wondering why (like really, why?) we’re all so fixated on appearances when, as thinking, feeling, humans we are so much more than what our bodies look like. In Glamour, Jamil even went so far as to write that she’s over the body positive conversation, writing: “I don’t even want to talk about body positivity anymore, because it means we are still focusing on our looks.”

To backtrack, it’s worth pointing out that Jamil does a lot of amazing work to try to counter the trend of body obsession Her Instagram page @i_weigh shares photos of women celebrating their “weight” (where weight is measured in their own personal successes, like their amazing families, their educational achievements, or their killer sense of humor). It turns the idea of what we weigh being equal to what we’re worth on its head.

To all this, we say yes, yes, and yesssssss. The ‘I’m so over appearance counting for everything’ vibe is a sentiment we can absolutely get behind with zero reservations. Because moving past the fixation on the size, shape, and weight of our bodies is what the body positivity movement is all about, right? Right.

But by saying that we should stop talking about ‘body positivity,’ Jamil kind of misses the point of the conversation. It’s kind of like saying that you don’t need feminism anymore because you’ve got a great job and you’re paid the same as your male co-worker.

Yes, Jamil’s ‘let’s stop talking about our bodies’ goal is totally admirable. Who wouldn’t LOVE to not have to talk about gender identities or the wage gap, too? But the reason we need to keep the conversation going about both women’s equality and body positivity is that, like feminism, body positivity has yet to reach and benefit everyone — women’s bodies continue to be judged and objectified. More problematically, our bodies still face the threat of sexual and physical violence, even in the workplace.

As long as women continue to be told that their bodies are “bad” we need to keep telling each other and ourselves that they’re not. The community that has grown out of the body positivity movement is one that offers heaps of much-needed support and encouragement to people who aren’t yet as confident as Jamil is. That community has become a source of confidence for so many people, and an unfailing cheerleader for those tough times when that confidence slips.

What have you learned from being a part of the body positivity community? Let’s chat on Twitter.

Corrina Allen
Corrina Allen is a film + television + travel writer from Toronto. Her journalistic goals include a backstage interview with David Byrne, the fictional character she identifies most closely with is John Wick, and her favorite dead person is Vladimir Nabokov. She never, ever Instagrams photos of her food (just her dog).
Body Positive
Body Positivity
Body Positive Every Body
More From Body Positivity