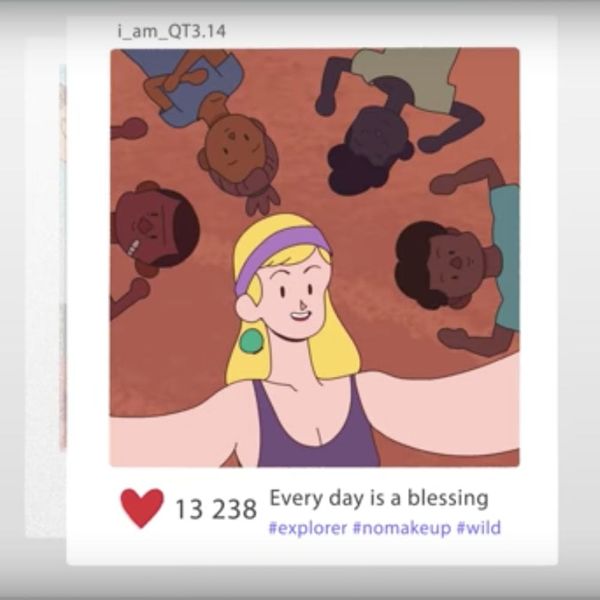 We’ve all seen them before: on Instagram, Facebook, and even dating apps, some people love to post selfies from their volunteer or mission trips abroad. Often, these photos feature white people posing with kids of color in poor communities overseas. Though the intention may be in the right place — wanting to raise awareness for a particular issue or just share photos of a trip — a new campaign explains why those selfies just aren’t a good idea, and how they can actually do more harm than good.

The new informational campaign comes from Radi-Aid, a project created by the Norwegian Students’ and Academics’ International Assistance Fund (SAIH) in partnership with the satirical Instagram account Barbie Savior. At its center is an animated video that pokes fun at those types of social media posts while offering a set of guidelines for taking photos on volunteer trips. The campaign aims to educate volunteers and travelers on how their photos can promote damaging stereotypes that end up hurting the very people the travelers hope to serve and give advice on how to share stories responsibly.

“Even though harm is not intended, many volunteers and travelers end up sharing images and text that portray local residents as passive, helpless and pitiful — feeding the stereotypical imagery instead of breaking them down,” the campaign website explains. Basically, when people volunteer travel abroad to low-income areas, they often just share photos and stories to get likes, without thinking about how their posts might deprive locals of their dignity and privacy.

The guide is already taking off and has the potential to make a big impact. Beathe Øgård, president of SAIH, tells Brit + Co that the organization has “already received requests from NGOs, universities and other networks who would like to use our guide in their own work.” SAIH also hopes to work with groups that lead volunteer trips that are popular among young people.

The campaign suggests four basic principles for travelers and volunteers to keep in mind before they take and share photos of their time overseas.

When posting about places and people you’re visiting, the campaign suggests not using words and phrases that make locals seem disempowered or pitiable. “You have the responsibility and power to make sure that what you write and post does not deprive the dignity of the people you interact with,” the site explains. And importantly: “Always keep in mind that people are not tourist attractions.” Treat people with the same dignity and respect you’d want if someone were visiting your home and spending time with your friends and family.

The second principle goes hand-in-hand with not treating people as tourist attractions. Getting informed consent is important if you’re going to take and post photos, the campaign says. This means: No taking photos without asking for permission first, and without explaining that you plan to share the photo on social media. The campaign also says to “Avoid taking pictures of people in vulnerable or degrading positions, including hospitals and other health care facilities.”

Extra consideration is also needed when taking photos of children. According to Øgård, group photos with children are “one of the most common examples of where ethical dilemmas we tend to ignore actually come up.” The guide states that visitors hoping to take pictures with kids should obtain permission from a child’s parents or caretakers, “while also listening to and respecting the child’s voice and right to be heard.” Øgård also encourages volunteers to put themselves in the child’s shoes, and ask how they would feel if they saw a photo of themselves as a kid online many years later that may give a false impression of their lives.

The campaign suggests that volunteers and travelers should take the time to think about why they’re actually taking the trip, asking questions like, “Why do you travel and volunteer? Is it for yourself or do you really want to make a difference?” The campaign explains that the mindset a person is in when they travel will have an impact on how they share and discuss the experience with others. Thinking through why you’re taking a particular photo will help clarify whether or not it’s a good idea to actually share it.

use your chance to bring down stereotypes

Did you know that 112% of the people living in the country of Africa don’t have access to toilets? This is the reality for 112% of Africans today. I don’t have much free time here between all my ventures - Harness the Tears, my essential oils ministry, orphan loving, Skeweral saving, high heel distribution, and so forth - but in the free time I do have I decided to begin Porcelain Promise: A Toilet Bowl Initiative. #becauseigiveacrap #literally #pushit #pushitrealgood #flatulentsavior #ugandabesquatting #careaboutcaca #hoveringatjustherightangle4jesus #commodes4christ #butibetjesusneverusedasquattypotty #waitamidoingitright? #squatitlikeitshot #squattingbelongsinthegym #teepee4mypeepeeplease #tinkletinklelittlesaviorhowiwonderhowyousquat #waittillyouexperiencetoiletseatcovers #urineforacushysurprise

When posting on social media about an experience abroad and talking about the trip with friends and family later, the campaign says to take the opportunity to challenge stereotypes. Instead of telling stories and framing people in a way that invokes pity, consider shedding light on lesser-told stories that go against harmful stereotypes. To get an idea of the best stories to tell and the best ways to talk about the people you spend time with, the campaign suggests asking locals what stories they’d like the world to hear about their lives and where they live.

The campaign also provides a handy checklist that volunteers and travelers can refer to before posting about their trips on social media. The 10-point list is based on the four principles and includes suggestions like “Know the name and background of the people portrayed,” “Offer the person in the photo a copy,” and, “Don’t portray yourself as the hero in the story conveyed.”

It’s possible to have experiences and make contributions overseas and not cause harm when sharing the experiences with others. Though it’s tempting to jump on the social media trend of sharing photos and posts that put yourself at the center, the new Radi-Aid campaign explains how what seems like a simple selfie is actually taking dignity away from real people. By following the guidelines set forward by the new campaign, volunteers and travelers can use their own experiences to tear down stereotypes and avoid causing harm.

Elizabeth King
Elizabeth King is a politics, history, and culture writer based in the Twin Cities. She is generally pretty cranky but still enjoys traveling, music from the early 2000's, and plotting the resistance. Feel free to say hi on Twitter at @ekingc or check out some of her work at www.elizabethcking.com.
Controversy
Current Events
Controversy social media Travel
More From Current Events