8 Women Who Are Shattering the Glass Ceiling in Their Industries 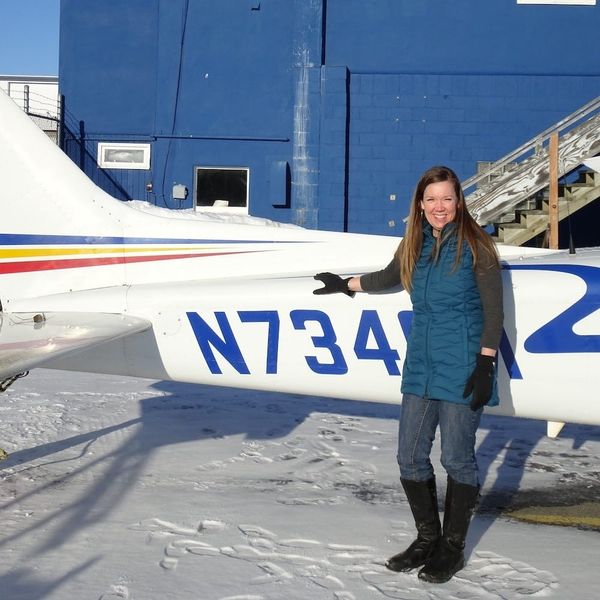 In 2019, it’s hard to believe that gender is still a factor in any workplace, but the divide is still existent, and even more prevalent when we call a plumber, roofer, or walk into a butcher’s shop. Now, more and more women are opening their own businesses, especially in skilled trades. According to new research, over 50 percent of those business owners are citing that it gives them the autonomy to call the shots, pay-wise, and eliminate gender-based discrimination at work. Silicon Valley-based mobile payment company Square, Inc. partnered with small business locator Thumbtack in a survey of over 1,000 women who are small business owners in traditionally male-dominated industries. They’re ignoring the gender gap and pushing forward, despite reporting being 10 times more likely than men to be questioned on their knowledge of their specific trades. Here’s what some of these trailblazers have to say about the pride they take in their work.

1. Flight Instructing: Jamie Patterson-Simes is one of the only 6.66 percent of flight instructors that are female in the US She founded SkyTrek Flight Training School in Anchorage, Alaska in 2014 after her contract as a flight instructor with the University of Alaska Anchorage wasn’t renewed. Getting more women into aviation has proven to be a challenge over the years, she says. “It’s a very slow, glacial metamorphosis. I would think that since the 1980s that the ratio of 4.5 percent of pilots being women would have changed, but it really has not budged,” says Patterson-Simes. “It’s difficult to balance family life (being a mother and engaged family member) with the demands of the aviation industry,” she adds. But her hard work and high standards earned SkyTrek the title of number one flight school in 2017 from the Aircraft Owners and Pilots Association. “I have garnered a reputation as a fair and compassionate flight instructor who produces quality pilots, and that’s how I’ve earned the respect of people in this industry,” Patterson-Simes says.

2. Dairy Farming and Cheesemaking: Marieke Penterman is one of 100 women who are licensed cheesemakers, out of just over 1,300 in the state of Wisconsin alone, according to the Wisconsin Department of Agriculture, Trade, and Consumer Protection. She’s the owner of Marieke Gouda in Thorp, Wisconsin, and runs the Penterman family dairy farm — and putting in the time and expertise needed to make cheese is just in her blood. “At first, I didn’t realize or feel the gender difference in this industry. I grew up on a 60-cow dairy farm and always continued my education and work. I quickly became used to the practice that when we work, we work,” Penterman says. She spends her days doing everything from guiding visitors and potential clients through her creamery, to milking the calves with her kids. She would like to see even more women like herself at the helm of cheese companies but starts by making sure there are equal opportunities on her own team. “I am proud of my two other licensed female cheesemaker colleagues and our whole team (both male and female),” she says.

3. Carpentry: Stevie Estler, the founder and Chief Carpenter at BuiltbyStevie in Nashville, Tennessee, turned building, what was once a hobby that she did to help friends and family whose homes needed furniture or fixing, into a full-time, all female-run construction company (which is important especially because only 2.2 percent of carpenters in the US are women). “I decided after creating my business that I wanted to hire only women: We call the staff the CarpentHERS,” Estler explains. “It creates a safe space for women to become confident builders and learn the ins and outs of the business without feeling like they need to prove their worth.” Her creations range in size from a custom wood wall or farmhouse dining room table set to a custom wood Jenga game, and there’s care and skill put into every piece. Stevie’s next project is to create a space to host workshops for women, teaching them the empowering feeling of grabbing power tools and building something like a coffee table tray. “My goal is to inspire more women to know that just because they are girls, doesn’t mean they can’t get comfortable using a miter saw,” she says.

4. Roofing: Letitia Hanke is one of just 2.6 percent of women nationwide who are getting on roofs and getting the job done. She’s the founder and CEO of ARS Roofing in Santa Rosa, California, and despite customers doubting her authority in the early days, she takes pride in being the face of the company. “I made a decision that I was going to show who I was, putting my face on all the marketing materials and being proud that I was a black woman in this industry,” Hanke says. She’s taking her experience and paying it forward, in hopes of seeing other women get started in her industry: She founded The LIME Foundation, an organization that inspires youth through music education and vocational training, and she also mentors young adults through teaching skilled trades at the Community Foundation in Cotatie, California. Of course, she always takes a special interest in women who might want to be roofers. “I had three potential female roofers in my most recent class, and that makes me excited, because we usually have one or two. So to make it to three, that’s an accomplishment — I want to see the numbers grow even more,” she says.

5. Auto Repair: Haylee Sjostrom, co-owner of Crimson Tires in Casper, Wyoming, partners with her husband in the shop, but doesn’t let the fact that she’s in the minority in the industry (only 1.8 percent of all auto repair professionals in the US are women) affect the way she demonstrates her expertise in servicing cars to her customers. Plus, now that she owns her own shop, she can call the shots. “I definitely felt underappreciated at my previous job, and I don’t think I made enough for what I did. Now I can decide how much I get paid — my husband and I both own the shop and we both make the same amount,” Sjostrom says. It’s important to her to simply normalize women working in trades like auto repair, and for this reason, she brings her one-year-old daughter to work with her. “I want women to know they can do this, starting with my own daughter. This is why I bring her to the shop and let her see her mom getting her hands dirty changing oil, rotating tires, and jacking up cars,” she says.

6. Woodworking: Best friends Krista Back and Amy Wall, and co-founders of BuilderChicks in Washington, DC left their full-time jobs in 2016 to start up a custom furniture and small renovation business. After side hustling as handywomen in their community for a long time, they wanted to make a big statement with the name BuilderChicks. “We want people to know right off the bat when they hire us that they are hiring women to do this. I have spent basically my whole life proving myself, so I think it’s a badge of honor for me. When I say we are BuilderChicks, that is something I am super proud of,” Wall says. Their next endeavor is to get more women in their area on board with building and fixing things as well as having their own businesses. “We’re starting an internship for high school girls who want to learn more about becoming a builder and a small business owner,” Wall explains. “Even if they don’t end up being one, we are arming them with life skills they can use well after the internship is over.” Back echoes the sentiment of creating an apprenticeship to inspire other women: “It would be awesome for us to be able to give back, pour into the lives of young girls and women, and really help them set up a future they want.”

7. Butchery: Melissa Cortina started her company, Bavette Meat & Provisions in Pasadena, California after training under a James Beard Award-winning chef and realizing her community needed a source of quality meat that’s raised and treated humanely throughout the butchery process. She works with one other butcher, who also happens to be a woman, a few days a week, but many days she handles the tasks of the entire business on her own: from meeting with ranchers, to making dog treats or bone broth from the provisions, to handling the brand’s social media, and even mopping the floors and taking out the trash. Cortina is used to brushing off customers’ occasional confusion that she’s indeed the butcher and not the farmer’s market sales associate when she sells her products in the community, but overall, doesn’t feel the need to prove herself to anyone. “When I was younger, anyway, being a woman in the meat industry felt like an act of defiance, but at this particular moment in time, I think there are more opportunities for women than ever,” Cortina says. She belongs to an organization for women in the meat industry, but the key for eliminating any remnants of the gender gap is visibility of her story and the way she runs her business. In fact, she adds, “I try really hard not to call myself a ‘female butcher’ at all. I prefer to be just a butcher, a good butcher. That’s my act of defiance now, and it’s quite intentional.”

Mara Santilli
Mara Santilli is a freelance writer based in New England. Her work has appeared in several publications, including Shape and Marie Claire. When she isn't writing, she can be found munching on any piece of dark chocolate she can get her hands on, plunking out her favorite acoustic songs on the guitar, and finding the cheapest Broadway tickets possible. Follow her adventures on Instagram to see where she's headed next.
Career Advice
Work
Career Advice
More From Work