This Lingerie Is Inspired AND Modeled by Women in Tech 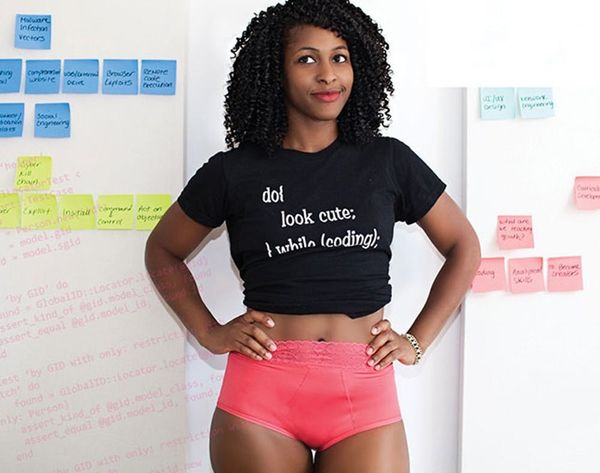 There’s a reason why It girls have forever inspired fashion designers, and it doesn’t always have to do with their mile-long legs. It’s their unmatched confidence that gets signature shoes, one-of-a-kind bags and capsule collections branded with their monikers. And it’s that same swagger that makes *us* want to wear it all and be just like them.

So, we were thrilled when high-performance undergarment brand Dear Kate not only announced that the muse for its latest line of bras and panties was a true trailblazer, the world’s very first computer programmer Ada Lovelace, but that it also tapped some of today’s savviest tech #girlbosses to model the colorful collection for its online lookbook. If you ask us, there might not be a more badass way to emphasize the “model” in “role model.”

Called The Ada, the collection of high-wasted briefs, hipsters, thongs and bralettes is featured on six different women in tech, including the founder of Geek Girl Web, the creator of Style It and the engineering lead at Refinery29, as they recreate a day in their nine-to-five lives. Outfitted in the cozy skivvies, it’s business as usual as the crew hovers over laptops to create complex code, brainstorms in the boardroom and maps out the next high-tech craze on sticky notes, all the while appearing totally unfazed by the intimate glimpse. After all, since the pairs are lined with three period-protective, yet breathable layers, you’re going to feel confident in underwear that is as ready-for-anything as your startup mentality.

The decision to be photographed and portrayed in your underwear is always bold, especially when made by businesswomen on the rise. But just try breaking into and slaying at your career in a largely male-dominated field — yep, it’s not the first big risk these gals will ever take, and because they’re already total vanguards, we’re sure it won’t be the last move that helps pave the way for the next generation of girls ready to shake up all-things http. Because in our eyes, Dear Kate’s lookbook is a stirring declaration that women in tech do come in every shape, size and skin color, and are empowered to always be their fearless selves.

Which style of Dear Kate skivvies are you swooning over? Are you on-board with the lookbook? Tell us in the comments below.