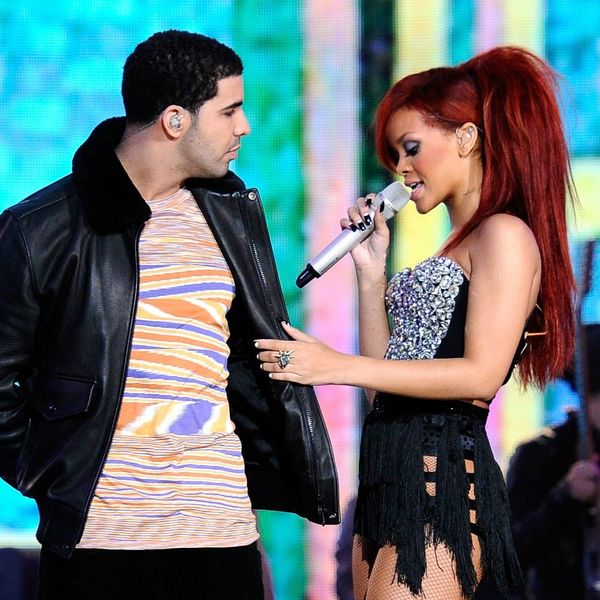 In case you haven’t heard, the cat’s out of the bag, people: according to E!, trendsetter Rihanna (we’re still lusting after that “This Is What You Came For” constellation hair and summer-perfect monokini) and her longtime rumored beau, Drake (complete with coloring book), have (FINALLY) let the pretenses fall to the wayside and embraced their status as a real, live couple. EEEEEEE!

An inside source told the outlet that the couple is most definitely on, saying of Drake, “He still loves her and he never stopped,” before adding, “Their music got them closer together again.”

While the pair have dated in the past, they’ve been playing coy ever since, using their musical collaborations on Rihanna’s “Work” (which went to number one on iTunes in less than 90 seconds — whoa) and Drake’s “Too Good,” along with their subsequent performances on Riri’s ANTI tour, as a buffer for their real-life romance. But anyone with eyes has pretttttttyyyy much known there was something more there for quite a while now. Let’s take a look back a few of most telling moments, shall we?

1. When Rihanna got super flirty during their 2011 Grammys performance. We see that playful little look, Rihanna. You aren’t fooling us. (Photo via Kevin Winter/Getty)

2. When they gazed intently into one another’s eyes. During a performance at a 2011 NBA basketball game, Rihanna and Drake circled one another onstage, locking eyes in a moment so powerful, we thought we’d explode. (Photo via Jason Merritt)

3. When Drake literally bowed down to his lady. Do we even need to say anything about this one? Following a racy performance at the 2016 Brit Awards that had many an eyebrow raised, even Drake was at a loss, bowing down to Riri in an unforgettably sweet moment. (Photo via @badgalriri)

4. When THIS picture was taken. A fan snapped this during an ANTI tour performance back in May, and if that’s not the look of love, well, we just don’t know what is! (Photo via @WordOnRd)

5. When Rihanna was all smiles dancing with her man. During their show in Manchester just two days ago, it was pretty much all Riri could do NOT to grin as she dirty danced with her man. We feel you, girl: New(ly rekindled) love will do that to you! (Photo via @badgalriri)

We’re just gonna go ahead and leave you with a link to this in that jaw-dropping “Work” vid, made all the more awesome now that we know that chemistry was REAL.

Are you happy to hear that Riri and Drake are official? Let us know @BritandCo!