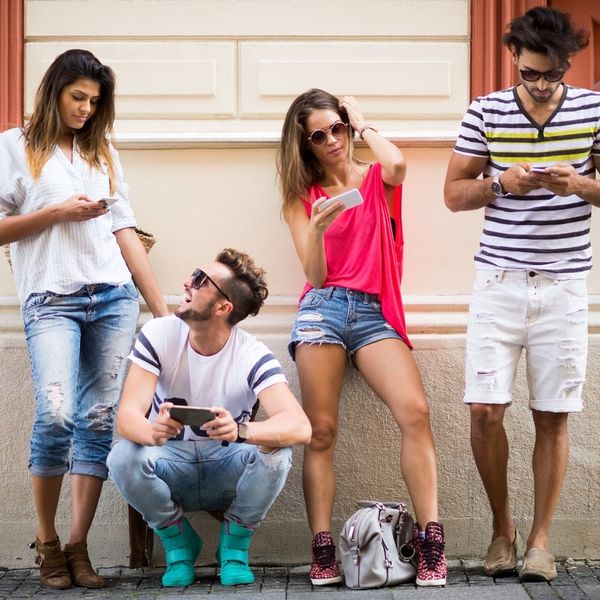 If you’re part of the 15 percent of American adults who use dating sites or apps, chances are that you’ve stopped and asked yourself at least once, “Are they for real?” The good news is that, while people can lie, the numbers don’t, and a recent study helps decode who is most likely to stretch the truth (or worse) on Tinder. So before you totally give up on the app and trade it in for other swiping platforms, scroll down to get the science behind who is really being honest.

Researchers investigated 500 Tinder users who were on the app for the full range of reasons — from hooking up to networking to social approval. Among the subjects, the researchers looked at both real identities and “deceptive self-presentations” to determine just how shady the average Tinder user actually is. Overall, users were actually pretty honest about themselves in their profiles, with a little over one-third of the people involved admitting that they tend to keep up a front to maximize their swipe-rights.

To learn more about the population of fibbers, the study went on to look at factors including self-esteem, loneliness, age, education and gender. Here are four things from the findings that might affect your swiping decisions in the future:

1. Smart is sexy… but maybe sneaky. Study participants with a higher level of education were more likely to fudge the facts about themselves in their profiles. If you have confirmation that a Tinder match is a smarty pants with a few degrees, be a little extra cautious about making sure everything checks out when you meet in person.

2. Motives matter. We may have suspected it all along, but now science has proven it — someone’s motivation for being on Tinder plays a big part in whether or not they’ll lie in their profile. Based on this study, Tinder users who claimed to be on the app seeking friendship and networking were most truthful, while users who were seeking self-validation were the shadiest. In general, the more serious users were about finding actual relationships, the more likely they were to be honest. Sure, that may seem a little obvious, but doesn’t it feel good to have the numbers prove us right?

3. Confidence is key. According to the study, lower self-esteem is one of the highest predictors for lying on Tinder. Once you’ve started chatting up a match, follow your instincts. If he’s coming off a little desperate and unsure of himself, there’s a higher probability that the way he’s presented himself in his profile isn’t quite the truth.

4. Girls and guys are equally likely to lie. Researchers noted that there was not a major difference in users’ tendency to lie based on whether they were men or women. Previous studies have shown that women and men on Tinder do differ in how they respond to enhanced profile pics. Women may trust men with enhanced photos. Although men may be attracted to an enhanced picture, they tend to be less trusting of the women who post them.

Our best advice on how to use this information to your advantage when scoping out the liars on Tinder? Be an educated user, and don’t be afraid to ask questions. Once you’ve swiped right, do your best to feel out if your match is lacking confidence or if they are only on Tinder to make themselves feel a little cooler. These factors might be tip-offs that they’re not being 100 percent honest about who they really are.

Who do you think is most likely to lie on Tinder? Tweet us @BritandCo!

Alli Hoff Kosik
Alli Hoff Kosik is a freelance writer who is passionate about reading, running, rainbow sprinkles, her lipstick collection, watching embarrassing reality TV, and drinking pink wine. She lives in Brooklyn with her husband and (in her dreams, at least) three golden retriever puppies. Listen to her talk books on The SSR Podcast.
Relationships
More From Relationships