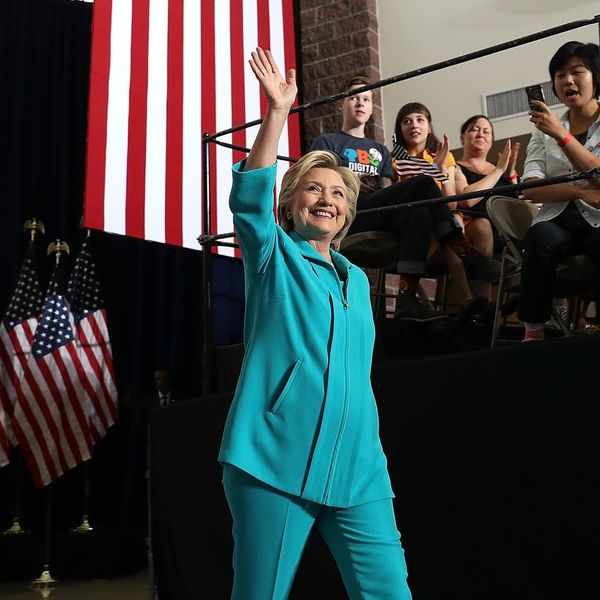 Life is all about perspective. During last night’s debate, Donald Trump let loose an insult just moments after saying nobody respected women more than he did. “Such a nasty woman,” he said as a response to one of Hillary Clinton’s zingers. Clinton kept marching through the debate, but the Twittersphere definitely took notice of Trump’s remark.

The ladies of Twitter started making rounds with#ImANastyWoman to show support for Clinton.

If you're a literate, smart, independent, working, or educated woman, you may be a #nastywoman #ImANastyWoman

And then one quick-thinking Twitter user decided to take action and registered the domain NastyWomenGetShitDone.com and made it redirect to Clinton’s website. “I registered the site because of the comment and also the idea of “bitches get stuff done,” Jeff Meltz, the man responsible for the site, told Bustle. (For context, see the Tina Fey/Amy Poehler legendary sketch, “Bitch is the new black.”)

And then the website registration just kept going. MakeAmericaNastyAgain.com was the second website of the night to take the comment and redirect it into support for Clinton. And THEN someone else decided to register BadHombres.org into direct Clinton support.

What were your highlights (or lowlights) from last night’s debate? Let us know @BritandCo!

Cailey Rizzo
Cailey is a junkie for all things pop culture. She studied journalism and English literature at SUNY Purchase, then continued studying French cinema and literature at Paris IV Sorbonne. She currently lives in New York where she can often be found singing '70s music at karaoke bars.
Politics
Tech
Politics twitter
More From Tech