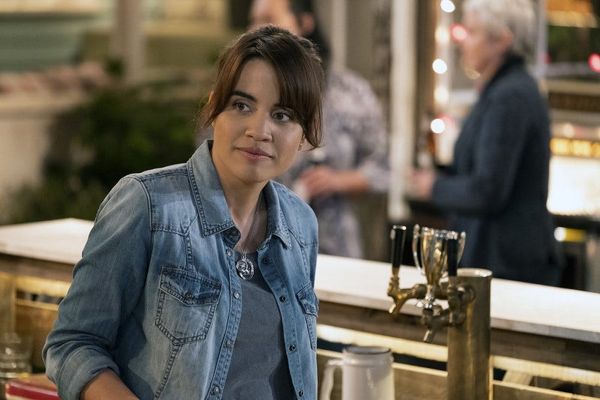 Mike Schur has a pretty successful sitcom streak going with The Office, Parks and Recreation, and The Good Place. And that streak looks to continue with his new show, Abby’s, starring Parks and Rec alum Natalie Morales. As its title suggests, the NBC comedy revolves around a character named Abby (Morales), who runs a semi-secret bar in her backyard for her friends and neighbors (many of whom you’ll recognize from shows like New Girl and Scrubs).

Abby, as Morales told Brit + Co in a recent phone interview, is “a no-nonsense gal who loves her friends very dearly and made this bar in her backyard because it was the place she wanted to hang out.” Really, it’s the place where everyone wants to hang out — including us. Read on to find out more about the show, Abby, and Morales, who is just as cool and charismatic as her character.

Brit + Co: Abby’s bar has a lot of rules — some of which she made up, some of which her friends made up. If you were going to start a bar in your backyard, what would be your number-one rule?

Natalie Morales: Probably, like, don’t tell anyone that this bar exists. [Laughs] And I have to approve all guests. That would be my personal rule.

B+C: One of the things that’s been mentioned a lot in connection with the show is the fact that Abby is bisexual. We learn this pretty early on, in a very casual conversation between Abby and another character — the same way we learn, for instance, that she’s a military veteran and a baseball fan. The show doesn’t make a big deal out of it, which in itself is kind of a big deal. What does it mean to you, as a member of the LGBTQ+ community yourself, to have that kind of representation on a major network comedy like this?

NM: It’s huge! It’s a super-huge deal. As a kid, I thought whatever was on regular network TV was kind of what was “normal” in America — what a family looked like in America, what a relationship looked like in America. And if I had seen Abby’s when I was kid, and I had seen a happy, healthy, bisexual woman leading a show, and it was just one of many cool things about her, it would have blown my mind. And I’m sure it’ll blow people’s minds now. … Let’s say you don’t know anybody who’s bi, and suddenly they’re in your house and they’re your friend. You know, Will & Grace did so, so much to move the needle over, because it put very funny, very gay people on the screen in your home every week, and they became your buddies. It’s important to keep doing that. We have to make the world of TV truly reflect what America looks like.

B+C: On a similar note, you’ve also been touted as the first Cuban-American lead on a show since Desi Arnaz.

NM: Yes! I didn’t see any Cubans on TV when I was growing up. I saw some Latina people, but usually in the part of the maid or the seductress or another stereotype. Anytime you get to see people that are not one of those represented in the Latin community, it’s very exciting.

B+C: Shifting gears a little — Abby’s is unique in that it’s filmed outside with a live audience. How does that compare to acting for, say, a camera crew?

NM: I think we all really liked it. All of us, for the most part, have stage experience, whether it’s stand-up or sketch or improv or theater. And there’s a reason why actors like to do that. It’s an instant focus group. You get results very quickly as to whether or not something is working, and you feed off of that. Also, I can be a little bit of a ham, so it creates a really fun energy.

B+C: This is the second show you’ve done with Mike Schur — the first being Parks and Recreation, of course. What is it like to work with him?

NM: It’s truly awesome. I read the script and found out that he was involved with it, and I was like, “I gotta do whatever I gotta do to get on this show.” That sounds terrible. I wasn’t going to do anything. But I want to work with Mike Schur for the rest of my life, because working with him on Parks and Rec was not only really amazing as a day-to-day experience, but what we were putting out there — it was my favorite show before I was on it. And The Good Place is incredible, too. That guy — anything he does is great, so I knew that this show would be great. He’s just the coolest. He makes things that I wish I could make. And you always want to work with people like that.

B+C: In addition to Parks and Rec, you’ve been on shows including White Collar, 90210, Santa Clarita Diet, Trophy Wife, and The Grinder, to name just a few. What’s the role you get recognized for most often?

NM: I would say probably Lucy from Parks and Rec. I get that a lot.